Star-News is an American, English language daily newspaper for Wilmington, North Carolina, and its surrounding area (known as the Lower Cape Fear). It is North Carolina's oldest newspaper in continuous publication. [2] It was owned by Halifax Media Group until 2015, when Halifax was acquired by New Media Investment Group. [3]

The Star-News has a circulation of 41,300 daily (47,400 Sunday) [1] and covers a three-county region in Southeastern North Carolina: New Hanover, Brunswick and Pender.

In 1927, R. W. Page bought the Morning Star, and in 1929 bought the city's afternoon newspaper, the Wilmington News-Dispatch, which was later shortened to simply the Wilmington News. Later in 1929, the two papers began running a combined edition on Sunday, the Star-News. Page and his family continued to own the paper until 1975, when it was acquired by The New York Times Company. [4]

From 1935 to 1970, the Morning Star was located in the Murchison Building on North Front Street in downtown Wilmington. The newspaper moved into its current location at 1003 17th Street South in 1970. [5]

On April 24, 2003; separate delivery of the Morning Star and News ended, and the two papers merged into a single seven-day paper, the Star-News. [6] [7]

As a result of damage from Hurricane Florence in September 2018, the Star-News moved into a temporary location in the Harrelson Building, after operating from a Hampton Inn, WWAY, and even homes of staff. The Star-News never stopped publishing during the storm. [5]

Wilmington is a port city and the county seat of New Hanover County in coastal southeastern North Carolina, United States.

WWAY, virtual channel 3, is an ABC/CBS/CW+-affiliated television station licensed to Wilmington, North Carolina, United States and serving the Cape Fear region. The station is owned by Morris Multimedia. WWAY's studios are located on Magnolia Village Way in Leland, and its transmitter is located west of Winnabow in Town Creek Township. On cable, the station is carried on Charter Spectrum channel 10. 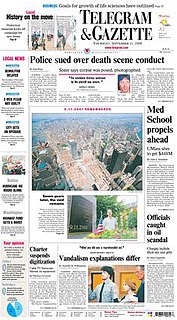 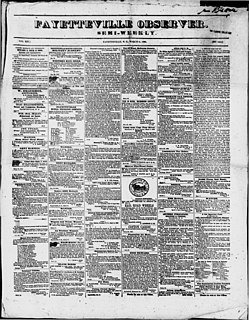 The Fayetteville Observer is an American, English language daily newspaper published in Fayetteville, North Carolina. As the oldest North Carolina newspaper, the paper was founded in 1816 as the Carolina Observer. It was locally owned by the McMurray family from 1923 to 2016, when it was acquired by GateHouse Media, which became Gannett in an acquisition in 2019.

The George Davis Monument is a monument to attorney and Confederate politician George Davis in Wilmington, North Carolina erected by the United Daughters of the Confederacy. 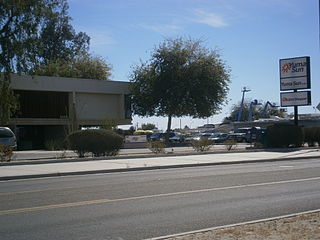 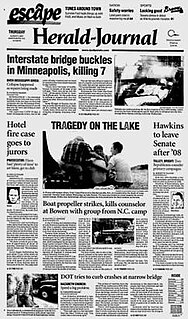 The Spartanburg Herald-Journal is a daily newspaper, the primary newspaper for Spartanburg, South Carolina, United States. 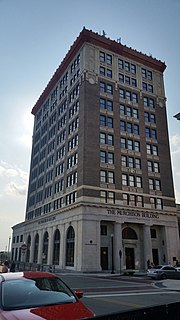 The Murchison Building is an eleven-story brick and marble building in Wilmington, North Carolina, USA. It occupies the corner of Front and Chestnut Street. Sitting on historic waterfront property, the building overlooks the Cotton Exchange and Cape Fear Community College to the north, USS North Carolina Battleship Memorial and Cape Fear to the west, Riverfront Park and Chandlers Wharf to the south and Wilmington Downtown including its Courthouse to the east.

The Daily News is an American, English language daily newspaper headquartered in Jacksonville, North Carolina. It has served the city of Jacksonville, Marine Corps Base Camp Lejeune, and the surrounding parts of Onslow County including, Richlands, Swansboro, Sneads Ferry, Holly Ridge, and North Topsail since 1953.

The Shelby Star is an American, English language daily newspaper based in Shelby, North Carolina. The newspaper was owned by Freedom Communications until 2012, when the company sold its Florida and North Carolina papers to Halifax Media Group. Then, in 2015, Halifax was acquired by New Media Investment Group.

Halifax Media Group was an American newspaper company owning more than 30 newspapers in five Southeastern U.S. States. It was founded on March 31, 2010 when a group of investors purchased The Daytona Beach News-Journal from the Davidson family, who had owned it for 82 years. On December 27, 2011, The New York Times Company announced it was selling its Regional Media Group to Halifax Media Group. On June 1, 2012, Halifax announced it was acquiring the Florida and North Carolina papers of Freedom Communications. In 2013, Halifax acquired three newspapers from HarborPoint Media: the Daily Commercial of Leesburg, Florida, the South Lake Press in Clermont, Florida and News-Sun of Sebring, Florida. In 2014, Halifax acquired the Telegram & Gazette of Worcester, Massachusetts. In November 2014, New Media Investment Group announced its acquisition of Halifax. The company was created with the assistance of Stephens Inc.