The Tomahittan are Native Americans whom Virginians James Needham and Gabriel Arthur tried to contact in order to bypass the taxes of the Occaneechi "middlemen" natives.

What tribe the Tomahittan belongs to is in dispute. For many years, scholars accepted that the Tomahittans were either Yuchi or Cherokee, and that the town visited by Needham and Arthur was somewhere west of the Blue Ridge Mountains. One investigation places the Tomahittans around the vicinity of present-day Rome, Georgia.

Other sources record that Tomahitan was the name of the main town of the Nottoway people in Southside Virginia. Some authors have mistaken the Tomahitans for the Cherokee, but in 1727 a delegation of Cherokee visiting Charleston referred to the Tomahitans as old enemies of their allies, the Yamasee. [1]

According to archaeologist Gregory Waselkov, the Tomahittan are "a Hitichiti-speaking group, probably a splinter from the Ocute paramount chiefdom on the Oconee River who moved to this vicinity in the late seventeenth century after the fall of Ocute." [2]

The Cherokee are one of the indigenous people of the Southeastern Woodlands of the United States. Prior to the 18th century, they were concentrated in what is now southwestern North Carolina, southeastern Tennessee, edges of western South Carolina, northeastern Georgia and northeastern Alabama.

The Waccamaw people are an indigenous people of the Southeastern Woodlands, who lived in villages along the Waccamaw River and Pee Dee River in North and South Carolina in the 18th century.

The Yamassee War was a conflict fought in South Carolina from 1715–1717 between British settlers from the Province of Carolina and the Yamasee and a number of other allied Native American peoples, including the Muscogee, Cherokee, Catawba, Apalachee, Apalachicola, Yuchi, Savannah River Shawnee, Congaree, Waxhaw, Pee Dee, Cape Fear, Cheraw, and others. Some of the Native American groups played a minor role, while others launched attacks throughout South Carolina in an attempt to destroy the colony.

The Yamasee were a multiethnic confederation of Native Americans who lived in the coastal region of present-day northern coastal Georgia near the Savannah River and later in northeastern Florida.

The Pee Dee people, also Pedee and Peedee, are American Indians of the Southeast United States. Historically, their population has been concentrated in the Piedmont of present-day South Carolina. In the 17th and 18th centuries, English colonists named the Pee Dee River and the Pee Dee region of South Carolina for the tribe. 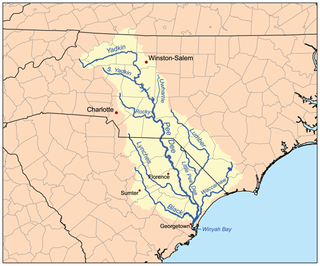 The Cheraw people, also known as the Saraw or Saura, were a Siouan-speaking tribe of indigenous people of the Southeastern Woodlands, in the Piedmont area of North Carolina near the Sauratown Mountains, east of Pilot Mountain and north of the Yadkin River. They lived in villages near the Catawba River. Their first European and African contact was with the Hernando De Soto Expedition in 1540. The early explorer John Lawson included them in the larger eastern-Siouan confederacy, which he called "the Esaw Nation."

The Croatan are a small Native American group living in the coastal areas of what is now North Carolina. They may have been a branch of the larger Roanoke people or allied with them. The Croatan people of North Carolina who exist today live in Cumberland, Sampson, and Harnett counties predominantly.

Guale was a historic Native American chiefdom of Mississippian culture peoples located along the coast of present-day Georgia and the Sea Islands. Spanish Florida established its Roman Catholic missionary system in the chiefdom in the late 16th century.

Tugaloo was a Cherokee town on the Tugaloo River, at the mouth of Toccoa Creek, near present-day Toccoa, Georgia and Travelers Rest in Stephens County, Georgia.

Abraham Wood (1610–1682), sometimes referred to as "General" or "Colonel" Wood, was an English fur trader and explorer of 17th century colonial Virginia. Wood's base of operations was Fort Henry at the falls of the Appomattox in present-day Petersburg. Wood also was a member of the Virginia House of Burgesses, a member of the Virginia Governor's Council and a high-ranking militia officer.

The Occaneechi are Native Americans who lived in the 17th century primarily on the large, 4-mile (6.4 km) long Occoneechee Island and east of the confluence of the Dan and Roanoke rivers, near current-day Clarksville, Virginia. They were Siouan-speaking, and thus related to the Saponi, Tutelo, Eno and other Southeastern Siouan-language peoples living in the Piedmont region of present-day North Carolina and Virginia.

The Waxhaw was a tribe native to what are now the counties of Lancaster, in South Carolina; and Union and Mecklenburg in North Carolina, around the area of present-day Charlotte. The Waxhaw were related to other nearby Southeastern Siouian tribes, such as the Catawba and Sugeree. It is speculated that they were culturally influenced by the Mississippian culture

Overhill Cherokee was the term for the Cherokee people located in their historic settlements in what is now the U.S. state of Tennessee in the Southeastern United States, on the west side of the Appalachian Mountains. This name was used by 18th-century European traders and explorers from British colonies along the Atlantic coast, as they had to cross the mountains to reach these settlements.

The Eno or Enoke, also called Wyanoak, was an American Indian tribe located in North Carolina during the 17th and 18th centuries that was later absorbed into the Catawba and/or the Saponi tribes.

The Cherokee people of the southeastern United States, and later Oklahoma and surrounding areas, have a long military history. Since European contact, Cherokee military activity has been documented in European records. Cherokee tribes and bands had a number of conflicts during the 18th century with European colonizing forces, primarily the English. The Eastern Band and Cherokees from the Indian Territory fought in the American Civil War, with bands allying with the Union or the Confederacy. Because many Cherokees allied with the Confederacy, the United States government required a new treaty with the nation after the war. Cherokees have also served in the United States military during the 20th and 21st centuries.

The protohistoric period of the state of West Virginia in the United States began in the mid-sixteenth century with the arrival of European trade goods. Explorers and colonists brought these goods to the eastern and southern coasts of North America and were brought inland by native trade routes. This was a period characterized by increased intertribal strife, rapid population decline, the abandonment of traditional life styles, and the extinction and migrations of many Native American groups.

Native Americans living in the American Southeast were enslaved through warfare and purchased by English and French colonists throughout the 17th, 18th, and 19th centuries, as well as held captive through Spanish-organized forced labor regimes in Florida. Emerging colonies in Virginia, Carolina, and Georgia imported Native Americans and incorporated them into chattel slavery systems, where they intermixed with slaves of African descent, who would come outnumber them. Their demand for slaves affected communities as far west as present-day Illinois and the Mississippi River and as far south as the Gulf Coast. The trade in enslaved Native Americans sent tens of thousands of them outside the region to New England and the Caribbean as a profitable export.

Ocute, later known as Altamaha or La Tama and sometimes known conventionally as the Oconee province, was a Native American paramount chiefdom in the Piedmont region of the U.S. state of Georgia in the 16th and 17th centuries. Centered in the Oconee River valley, the main chiefdom of Ocute held sway over the nearby chiefdoms of Altamaha, Cofaqui, and possibly others.