The Tomba della Mula (Italian: "Tomb of the She-Mule") is a beehive tomb in Sesto Fiorentino, near Florence, central Italy, dating to the 7th century BC.

The names derives from an ancient legend, according to which a golden she-mule had been buried in the fields around Florence. It is known since the 15th century, and is the largest pre-Roman Italic dome tomb known in Italy. The structure has a diameter of some 9 meters.

The tomb was declared a national monument in 1905.

The Chiesa di Santa Margherita de' Cerchi is a 13th-century, Roman Catholic church dedicated to Margaret the Virgin in the centre of Florence, region of Tuscany, Italy. It is among the oldest churches in Florence.

The province of Arezzo is the easternmost province in the Tuscany region of central Italy. Its capital is the city of Arezzo. The province is bordered by the regions of Marche, Emilia-Romagna, Umbria, and the provinces Siena and Florence of Tuscany. It has an area of 3,233 square kilometres (1,248 sq mi), a total population of about 344,000 in 36 comuni 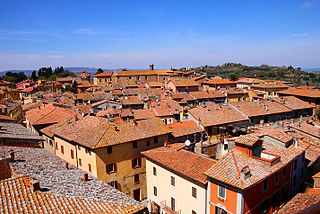 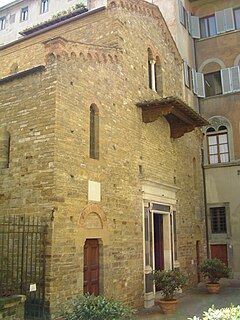 The Church of Santi Apostoli is a Romanesque-style, Roman Catholic church in the historic center of Florence, in the Tuscany region of Italy. It is among the oldest church buildings in Florence.

The Mugello is a historic region and valley in northern Tuscany, in Italy, corresponding to the course of the River Sieve. It is located to the north of the city of Florence and includes the northernmost portion of the Metropolitan City of Florence. The Futa Pass connects the Mugello valley to the separate Santerno river valley.

The Museum of Zoology and Natural History, best known as La Specola, is an eclectic natural history museum in Florence, central Italy, located next to the Pitti Palace. The name Specola means observatory, a reference to the astronomical observatory founded there in 1790. It now forms part of the Museo di Storia Naturale di Firenze. This museum is part of what are now six different collections at four different sites for the Museo di Storia Naturale di Firenze.

Santa Maria Maggiore di Firenze is a Romanesque and Gothic-style, Roman Catholic church in Florence, region of Tuscany, Italy. This is among the oldest extant churches in Florence. 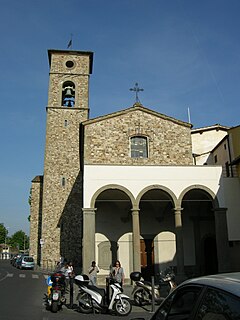 San Salvi, also known as San Michele a San Salvi, is a church in Florence, Italy. 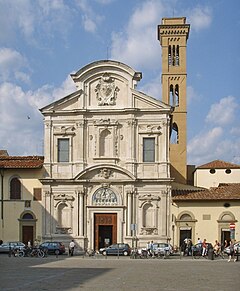 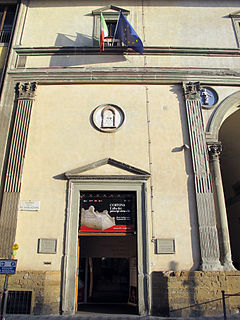 San Pancrazio is a church in Florence, Italy, in Piazza San Pancrazio, behind Palazzo Rucellai. With the exception of the Rucellai Chapel, it is deconsecrated and is home to the museum dedicated to the sculptor Marino Marini. The Rucellai Chapel contains the Rucellai Sepulchre or Tempietto del Santo Sepolcro. Since February 2013 it has been possible to visit the chapel from within the Marini museum. 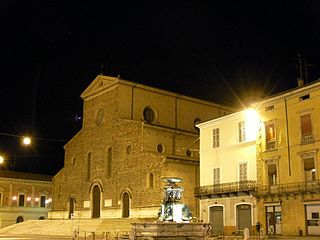 Faenza Cathedral is a Roman Catholic cathedral built in the style of the Tuscan Renaissance in central Faenza, Italy. It is the seat of the Bishop of Faenza-Modigliana and is dedicated to Saint Peter the Apostle.

Piazza Santa Croce is one of the main plazas or squares located in the central neighborhood of Florence, region of Tuscany, Italy. It is located near piazza della Signoria and the National Central Library, and takes its name from the Basilica of Santa Croce that overlooks the square.

The Museo dell'Opera del Duomo in Florence, Italy is a museum containing many of the original works of art created for the Cattedrale di Santa Maria del Fiore, the cathedral (Duomo) of Florence. As of August 2013, the director of the museum is Fr. Timothy Verdon, an American.

The Baroncelli Chapel is a chapel located at the end of the right transept in church of Santa Croce, central Florence, Italy. 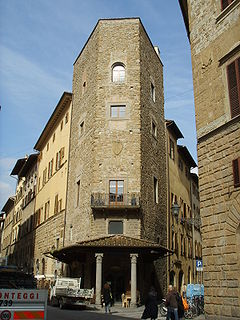 The Torre degli Alberti is a XIII century medieval tower in Florence, Italy. It has a polygonal plan and was the headquarters and residence of the Alberti, one of the most numerous and powerful families in the medieval Florence.