Tommy Hamilton (born 1935 in Bray) is a former Irish footballer who played as a forward. He was educated at Synge Street CBS [1] in Dublin.

His first club was Manchester United whom he joined in 1953 where he began playing as an inside forward for the third team and reserves. Hamilton had played for Johnville F.C., where he was trained and scouted by Jem Kennedy who sent him to Manchester United. However, Hamilton was not prepared for being conscripted so he came home to sign for Shamrock Rovers in November 1955 [2] and made his debut against Waterford at Kilcohan Park on 6 November in a League of Ireland Shield match.

The following season he was the League's top scorer. [3]

Hamilton scored twice for Rovers in the European Champion Clubs' Cup. [4] After scoring at OGC Nice he was ruled out of the home leg due to tonsillitis. He played three times in Europe for the Hoops.

He won two caps for the Republic of Ireland making his debut in a 2–0 win over Czechoslovakia on 5 April 1959 in Ireland's first ever European Championship qualifier at Dalymount Park. His second and final cap was in the return game at Tehelne pole, Bratislava on 10 May. He also won one Republic of Ireland B national football team cap in 1960 scoring both goals in a 2–1 win over Iceland.

Tommy finished up scoring 44 League goals and 9 FAI Cup goals as well as his 2 European strikes. He represented the League of Ireland 20 times in his seven years at Milltown scoring once.

His last competitive game for the Hoops was the 1962 FAI Cup final in which he scored twice. This made up for being bizarrely dropped for the 1957 and 1958 finals.

He shared his benefit with Maxie McCann against Sunderland at Dalymount Park on 30 April 1962. [5] That match was Tommy Hamilton's last match for Rovers as he joined Cork Hibernians in a player-exchange deal that brought Jackie Mooney to Milltown.

The following week he won the Soccer Personality of the Year Award. [6]

Hamilton spent three season there before moving to Limerick F.C. where he made another Cup Final appearance losing to Rovers. This qualified Limerick for the 1965–66 European Cup Winners' Cup where Hamilton appeared. 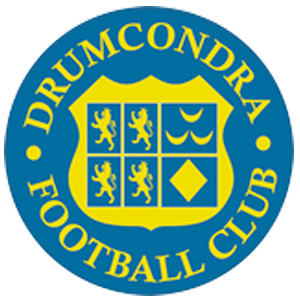 Drumcondra Football Club is an Irish association football club based in Drumcondra, Dublin. Their senior team play in the Leinster Senior League Senior Division 1A. Drumcondra FC also field a team in the Major 1B Saturday Division of the LSL.

Terry Eviston was a footballer who played for Home Farm, Bohemians, Athlone Town A.F.C., Dundalk F.C. and two spells with Shamrock Rovers. He is the current manager of Raheny United in the Women's National League (Ireland).

Liam Tuohy was an Irish footballer and manager. During the 1950s and 1960s, Tuohy played as an outside left for Shamrock Rovers, Newcastle United, and the Republic of Ireland. In 1959, while playing for Ireland, Tuohy scored the first ever goal in the history of the European Championship. After retiring as a player, Tuohy became a coach and managed several clubs in the League of Ireland including Shamrock Rovers, Dundalk, and Shelbourne.

Jackie Mooney was an Irish soccer player during the 1960s and 1970s.

Patrick Ambrose was a professional football player and coach from Dublin, Ireland.

Mick Leech was an Irish professional football player who made his name with Shamrock Rovers in the 1960s.

Noel Peyton is an Irish former professional footballer who played as an inside left for Shamrock Rovers, Leeds United and York City, and for the Republic of Ireland national football team.

John Keogh is an Irish former professional football player who played as a full back in the 1960s. 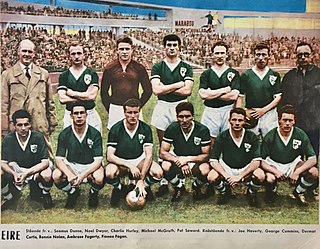 Thomas Fergus Godwin, commonly referred to as Tommy Godwin, was an Irish footballer who played for shamrock Rovers, Leicester City and Bournemouth & Boscombe Athletic F.C.. On 21 September 1949, together with Con Martin, Johnny Carey and Peter Farrell, he was also a member of the Irish Football Team formed in Ireland that defeated England in 1949 at Goodison Park, becoming the first non - Uk team to beat England at home.

David Byrne was an Irish former footballer who played as a forward.

Seamus "Shay" Keogh was an Irish footballer who played as a centre half. He was part of the great Shamrock Rovers teams of the 1950s in a side, popularly known as Coad's Colts, that enjoyed many memorable days during that decade. A former schoolboy and youth international, he joined Shamrock Rovers in 1952 and stayed for nearly a decade at Glenmalure Park. As a Crumlin man, Shay played in the club's first four European games against Manchester United and OGC Nice in the European Champion Club's Cup.

Liam Hennessy was an Irish international footballer who played as an attacking left half, with a gifted left foot. Nicknamed "The Gunner" such was the power and shooting accuracy he delivered both from open play and from the penalty spot.

Donal Leahy was an Irish footballer.