Tommy Runar (born 25 April 1982) is a retired Norwegian football goalkeeper. Runar played for Jerv, joining Start in 2004. He spent the majority of the 2008 season on loan at Fredrikstad, serving as cover for Lasse Staw. [1]

He retired after the 2012 season, and has since worked as goalkeeping coach for FK Jerv and Amazon Grimstad. [2] [3]

He is member of an Humanity Organisation Start Life Support and founded in Mbale, Uganda, a football camp, along with Kaspar Strømme. [5] 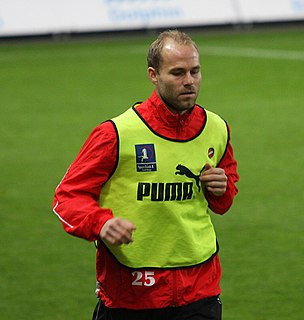 Roger Risholt is a retired Norwegian football midfielder who last played for Fredrikstad in the Norwegian First Division. He is the twin brother of fellow footballer Kai Risholt.

Sven Andreas Landgren is a Swedish footballer who plays for Helsingborgs IF as a midfielder or defender.

Thomas Drage is a Norwegian football player who plays for Fredrikstad FK.

Mads André Hansen is a former Norwegian footballer, and a one-hit wonder with the single "Sommerkroppen". He has previously played for Lier, Strømsgodset, Fredrikstad Fotballklubb and Mjøndalen IF. He is also an influencer, and TV-presenter.

Haitam Aleesami is a Norwegian professional footballer who plays as a left-back for Russian club FC Rostov and the Norway national team.

Alexander Ruud Tveter is a Norwegian footballer who plays as a forward for Sarpsborg 08.

J.J. Ugland Stadion – Levermyr, more commonly known as Levermyr stadion, is a multi-purpose stadium in Grimstad, Norway and home of the OBOS-ligaen team FK Jerv, the 1. Division team Amazon Grimstad, and Sørild FIK. The stadium itself is owned by the local municipality, and it located just a few hundred meters from the town centre, in the Levermyr area. Though opening as a multi-purpose arena in 1983, football have been played here for much longer. The capacity of the stadium is currently 1,750. The record attendance is around 8,000, from a national B-team men's football match between Norway and Finland in 1963, while Jerv's record is around 7,000 from a cup match against Viking in 1976. Amazon Grimstad's record is 5,000 from a show match against BUL Oslo in the summer of 1970. The more recent record attendance is some 3,000 in a cup clash between Jerv and rivals Start in 2010.