Tommy Taylor (born 11 November 1991 in Macclesfield, England) is a rugby union player for Wasps RFC [1] in the Aviva Premiership. He plays as a hooker. He formerly played for Sale Sharks having made 106 appearances. [2]

Taylor was selected for the England squad to face the Barbarians in the summer of 2014. [3] 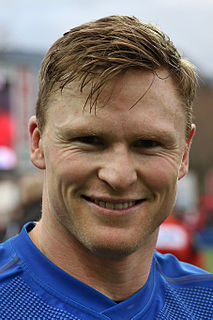 Christopher John Ashton is an English rugby union and former rugby league player, and one of the few players who have represented England in both rugby codes. A wing or fullback, he joined Worcester Warriors of the Gallagher Premiership in January 2021.

Danny Cipriani is an English rugby union player set to join Premiership Rugby side Bath in May 2021. He previously played for Gloucester, Sale Sharks and Wasps in the Premiership and Melbourne Rebels in Super Rugby. He plays fly-half and fullback. He has also played for England. Since starting in the Wasps academy in 2003, Cipriani has been capped for England 16 times.

David Peter Ewers is a Zimbabwean rugby union player in the Aviva Premiership for the Exeter Chiefs. He previously played for the Cornish Pirates in the Championship on a dual registration. He is capable of playing both Flanker and Number 8. Ewers is known for his destructive ball carrying, and exceptional defensive capabilities.

Ross Harrison is a rugby union player for the Sale Sharks in the Aviva Premiership. He plays as a prop. He was called up to the England Saxons squad in January 2015 and made his 100th appearance for Sale Sharks against Harlequins on the 6 November 2015. 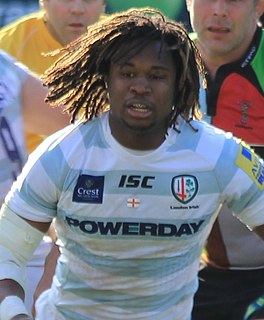 Marland Yarde is an English rugby union wing who plays for Sale Sharks. He has previously played for London Irish, Harlequins and has spent time on loan at London Welsh. At international level Yarde has won 13 caps for England since 2013.

Nicky Thomas is a Welsh professional rugby union footballer, currently playing for Wasps in Premiership Rugby on loan from Ospreys in the Pro14.

George David Nott is a Welsh professional rugby union player who plays as a lock or flanker for London Irish.

Gwenllian Pyrs is a Welsh rugby union player who plays either tighthead or loosehead prop for the Wales women's national rugby union team and Sale Sharks Women of Premier 15s. She made her debut for the Wales rugby union team in 2017 and has played in 15 matches for the national side. Prys has played for Scarlets, RGC Women, Caernarfon RFC and Firwood Waterloo at the club level. She works as a farmer, sheepdog breeder and trainer as well as a rugby hub officer for the Welsh Rugby Union while continuing her rugby career.