Tommy Wirkola (born December 6, 1979) [1] is a Norwegian film director, producer, and screenwriter of Finnish heritage. Wirkola's first film was 2007's Kill Buljo , which he co-wrote with Stig Frode Henriksen. [2] They later made the 2009 horror comedy Dead Snow . [3] In 2010 they again collaborated on the film Kurt Josef Wagle and the Legend of the Fjord Witch. [4] In 2012 a television series directed & produced by Wirkola called Hellfjord premiered, consisting of seven 30-minute episodes. [5] His first English-language film, which was also his first large-budget film, was Hansel & Gretel: Witch Hunters , which was co-written by Dante Harper and released in 2013. [6] In 2014 a sequel to Dead Snow, named Dead Snow 2: Red vs. Dead , was released. [7] [8] Wirkola's most recent film, What Happened to Monday , a science fiction film starring Noomi Rapace & Willem Dafoe, was released in 2017. 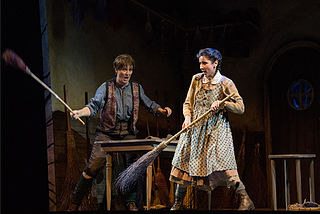 Hansel and Gretel is an opera by nineteenth-century composer Engelbert Humperdinck, who described it as a Märchenoper. The libretto was written by Humperdinck's sister, Adelheid Wette, based on the Grimm brothers' fairy tale "Hansel and Gretel". It is much admired for its folk music-inspired themes, one of the most famous being the "Abendsegen" from act 2.

Kill Buljo is a 2007 Norwegian black comedy film directed by Tommy Wirkola. It parodies the Quentin Tarantino film Kill Bill. It is set in Finnmark, Norway and portrays the protagonist Jompa Tormann's hunt for Tampa and Papa Buljo. The film depends heavily on satirizing stereotypes about Norway's Sami population.

Hansel and Gretel is a 2007 South Korean horror film directed by Yim Pil-sung. 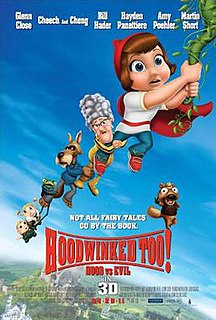 Hoodwinked Too! Hood vs. Evil is a 2011 American computer-animated 3D comedy film and the sequel to 2005's Hoodwinked!, directed by Mike Disa and released on April 29, 2011 by The Weinstein Company. The film was written by Disa, Cory Edwards, Todd Edwards and Tony Leech, who wrote and directed the previous Hoodwinked! film. Most of the cast reprised their roles, with the exceptions of Anne Hathaway and Jim Belushi, who were replaced by Hayden Panettiere and Martin Short, respectively.

Dead Snow is a 2009 Norwegian comedy horror film directed by Tommy Wirkola, starring Charlotte Frogner, Stig Frode Henriksen, Vegar Hoel, Jeppe Laursen, Evy Kasseth Røsten, Jenny Skavlan, and Lasse Valdal. The film centers on a group of students surviving a zombie Nazi attack in the mountains of Norway. The premise of the film is similar to that of the draugr, a Scandinavian folkloric undead greedily protecting its treasures. NYAV Post has produced an English dub of this film for the home media release.

Julia Elise Schacht is a Norwegian actress, born on the island of Helgøya in the lake Mjøsa. 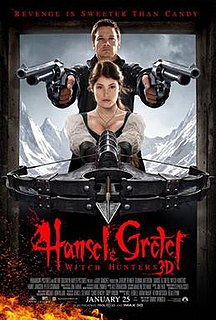 Hansel & Gretel: Witch Hunters is a 2013 action horror film written and directed by Tommy Wirkola. It is a continuation to the German folklore fairy tale "Hansel and Gretel", in which the titular siblings are now grown up and working as a duo of witch exterminators for hire. The film stars Jeremy Renner and Gemma Arterton in the title roles with Famke Janssen, Peter Stormare, Thomas Mann, Pihla Viitala and Derek Mears as the supporting cast.

Standartenführer (Oberst) Herzog is a fictional character from Dead Snow, a Norwegian independent zombie comedy ("zomedy"). Portrayed by Ørjan Gamst, he is the chief antagonist. Originally the merciless Nazi commander for an Einsatzgruppen division stationed near Øksfjord, Norway during World War II, his appearance in the film is as a zombie, re-animated in 2009. He returns as the main antagonist of the film's sequel, Dead Snow 2: Red vs. Dead, leading his troops to fulfill an outstanding order from the war given by Adolf Hitler.

Hansel & Gretel is a 2013 American horror film produced by The Asylum and directed by Anthony C. Ferrante that stars Dee Wallace, Brent Lydic and Stephanie Greco. While the film is considered a "mockbuster", intended to capitalize on the release of Paramount and MGM's film Hansel & Gretel: Witch Hunters, it is a modern retelling of the Brothers Grimm fairytale of the same name.

Hansel & Gretel Get Baked is a 2013 American comedy horror film from Mark Morgan, producer of The Twilight Saga film series. Directed by Duane Journey, it stars Michael Welch, Molly Quinn and Lara Flynn Boyle. The film was released in theaters and on VOD on February 19, 2013.

Dead Snow 2: Red vs. Dead is a 2014 comedy horror film directed by Tommy Wirkola. It is a sequel to Wirkola's 2009 film Dead Snow. The film was released in Norway on 12 February and in the United States on 10 October 2014. Vegar Hoel reprises his role from the first film as Martin, the sole survivor of an attack by Nazi zombies led by the evil Herzog. Filming took place in Iceland.

Cecilie Askeland Mosli is a Norwegian actress and film director.

Gretel & Hansel is a 2020 dark fantasy horror film based on the German folklore tale "Hansel and Gretel" by the Brothers Grimm. The film is directed by Oz Perkins, and produced by Fred Berger, Brian Kavanaugh-Jones, and Dan Kagan, with a screenplay by Rob Hayes. Sophia Lillis and Sam Leakey portray the title characters, alongside Charles Babalola, Jessica De Gouw, and Alice Krige. The story follows Gretel and Hansel as they enter the dark woods in order to find work and food, and then stumble upon the home of a witch.

Hansel vs. Gretel is a 2015 action horror film released by The Asylum as a sequel to the company's 2013 Hansel & Gretel — a modern update of the classic Brothers Grimm fairytale of the same name. The film picks up after the events of the first film and follows witch hunter Hansel, as he battles his sister Gretel, who is under a dark spell and is trying to become the new leader of a coven of witches. Brent Lydic returns to star as Hansel, although Gretel was recast and portrayed by Lili Baross. 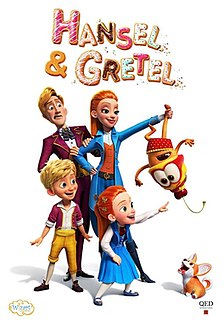 Secret Magic Control Agency is a 2021 English-language Russian 3D computer-animated spy fantasy adventure family film. The film is produced by Wizart Animation studio and CTB Film Company. The film is based on the 1812 story Hansel and Gretel by Brothers Grimm. The film's production has been presented in a variety of international film markets. The film released on 18 March 2021 in Russia by Sony Pictures Productions and Releasing (SPPR). Except Russia, Netflix acquired global rights to the film and is set for a 25 March 2021 release.

Witchslayer Gretl is a 2012 American-Canadian dark fantasy television film written by Brook Durham and Angela Mancuso, and directed by Mario Philip Azzopardi. Inspired by the Brothers Grimm fairy tale Hansel and Gretel, it stars Paul McGillion as Hansel, a witch hunter who comes into conflict with his witch-possessed sister, Gretl, played Shannen Doherty. It was one of several similarly-themed Hansel and Gretel films that were made in an attempt to "cash-in" on the 2013 film Hansel & Gretel: Witch Hunters.