Tommy Zethraeus (born 28 May 1969) is a Swedish mass murderer responsible for the murder of four people outside the restaurant Sturecompagniet at Stureplan, Stockholm on 4 December 1994. [1] [2] After Zethraeus and two of his friends were denied entry at the door to the restaurant, they went home by taxi and returned at about five in the morning. [3] Zethraeus had brought with him a fully automatic Norwegian AG-3 battle rifle and gunned down three women, Katinka Genberg (21), Daniella Josberg (22) and Kristina Oséen (21), and doorman Joakim Jonsson (22). [4] Over twenty other people were injured. [3]

He was tried and later sentenced to life imprisonment. [3] Zethraeus applied in 2009 to seek a time frame set for his life sentence, but his application was denied by the court. [5] However, on 11 February 2014, an Örebro court decided to grant Zethraeus his application setting a conditional parole in 2016. [6] [7] The Örebro District Court's decision was appealed to the Court of Appeal, where it was repealed.

In 2016, Zethraeus applied again for a determinate sentence. The Örebro District Court granted his application, but the decision was appealed. On 26 August 2016, the Court of Appeal denied his application, citing that it was too early to set a determinate sentence because Zethraeus' risk of recidivism in serious crime was too high. [8] He was released from prison in December 2020. [9]

Clark Oderth Olofsson, is a Swedish criminal now living in Belgium. He has received sentences for attempted murder, assault, robbery, and dealing narcotics and has spent more than half of his life in correctional institutions in Sweden. Olofsson has been called Sweden's first "celebrity gangster".

Mattias Flink is a Swedish spree killer who killed seven people on June 11, 1994, in Falun, Sweden. At the time, he was a second lieutenant in the Swedish Army. He was released from prison on June 11, 2014, exactly twenty years after the murders.

Jackie Banny Arklöv is a Swedish convicted criminal. Arklöv is an ex-neo-Nazi and Yugoslav Wars mercenary and war criminal, who, with two other neo-Nazis, murdered two police officers after a bank robbery in 1999.

Alexander Gerndt is a Swedish professional footballer who plays as a striker for Lugano in the Swiss Super League.

Astrit Agim Ajdarević is a Swedish-Albanian professional footballer who plays as a midfielder for Swedish club Akropolis IF. Having represented the Sweden U17, U19, U21, and Olympic teams, he made his full international debut for Albania in 2017.

Helge Arnold Fossmo is a pentecostal pastor sentenced to life imprisonment for solicitation of the Knutby murder in Sweden in 2004.

Emir Bajrami is a Swedish former professional footballer who played as a winger. Best remembered for his time with IF Elfsborg, he also represented FC Twente, AS Monaco, and Panathinaikos. He won 18 caps for the Sweden national team and was a squad member for his country at UEFA Euro 2012.

Life imprisonment in Sweden is a term of imprisonment for an indeterminate length. Swedish law states that the most severe punishment is "prison for 10 years or life." However, a prisoner may apply to the government for clemency, have their life sentence commuted to a set number of years then standard Swedish parole regulations follow. Offenders under the age of 21 on the day the crime was committed can not be sentenced to life imprisonment.

Kent Alexander Ekeroth is a Swedish politician and economist, who represented the Sweden Democrats.

The Malexander murders were the murders of two police officers, Robert Karlström and Olov Borén, at Malexander, Sweden on 28 May 1999. The murders were committed after a bank robbery in Kisa earlier that day. Three men were convicted of the crimes, Tony Olsson, Andreas Axelsson and former mercenary Jackie Arklöv. The murders in Malexander were among the most high-profile cases in Sweden. The three perpetrators were active neo-Nazis and the robbery spree before the murders was committed as part of their plan to collect money to fund and create a "revolutionary" Nazi organization.

Leif Bruno Axmyr was a Swedish convicted criminal. At the time of his release in 2016, he had been imprisoned longer than any other Swedish inmate who had served a life sentence. In May 1982, Axmyr was on leave from prison when he killed his ex-girlfriend and her male friend. He was sentenced to life imprisonment for the double murder and other offences. In 1997, the newspaper Svenska Dagbladet stated that Axmyr was Sweden's longest-serving prisoner in a Swedish prison. Örebro district court commuted his life sentence to 51 years in 2013; he was released on 2 June 2016 after serving 34 years in prison.

Pa Momodou Konate is a Swedish-born Guinean footballer who plays as a left back for Botev Plovdiv and the Guinea national team. Konate previously represented the Sweden national team for which he won three caps and was a part of the Sweden U21 team that won the 2015 UEFA European U21 Championship. On the club level he has won four Allsvenskan titles with Malmö FF and played professionally in Italy and the United States.

Lars-Inge Andersson best known as Lars-Inge Svartenbrandt, later Lars Ferm and even later known as Lars Patrick Carlander, was a Swedish criminal. Svartenbrandt spent almost 40 years combined in prison for several robberies, violent crimes, and prison escapes. He was described as the "most dangerous man in Sweden". Svartenbrandt described himself as an "uncurable psychopath".

Sturecompagniet is one of Swedens biggest and most known nightclubs and is located at the old Sturebadets 1800-locals at Sturegatan 4 at Stureplan in Stockholm. Close to Sturecompagniet lies nightclubs Hell's Kitchen and IV. Sturecompagniet was in 1994 the scene of the notorious mass murder perpetrated by Tommy Zethraeus.

Per Olof Holknekt, is a Swedish fashion designer and entrepreneur. He is also the founder of several magazines and companies, the most successful of which is the clothing company Odd Molly. 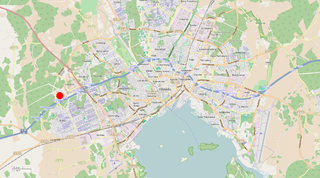 The 2015 IKEA stabbing attack occurred on 10 August when Abraham Ukbagabir fatally stabbed two people in an IKEA store in the Erikslund Shopping Center in Västerås, Sweden, as revenge for not being granted asylum in Sweden. The stabbing attracted worldwide attention. Ukbagabir was convicted of two first degree murder charges and sentenced to life in prison in December 2015.

Lena Amalia Kyoung Ran Sundström is a Swedish journalist and author. She writes news chronicles and writes for Swedish daily newspaper Dagens Nyheter. She has also had her own column at Aftonbladet newspaper, Metro newspaper's Swedish editions, Mersmak and Dagens Arbete.