Antonius Cornelis Franciscus (Ton) Vorst (born 1952, Utrecht) [1] is a Dutch financial engineer and mathematician, Professor at the department of Finance of the Vrije Universiteit in Amsterdam, and Director of the VU Amsterdam School of Finance and Risk Management.

Vorst received his PhD in Mathematics in 1978 from the University of Utrecht for the thesis "Kn-regular curves" under the supervision of Jan Rustom Strooker and Wilberd van der Kallen. [2]

In the early 1980s, Vorst started his academic career as a researcher at the Econometric Institute of the Erasmus University Rotterdam, where he was appointed Professor in Finance in 1989. With Harm Bart, he was Co-Director of the Econometric Institute from 1992 to 1998 as successor of Teun Kloek, and they were succeeded by Herman K. van Dijk. From 2000 to 2009, he was Executive Vice President of ABN AMRO, which was partly sold to The Royal Bank of Scotland Group in 2007. In 2006, he was also appointed Professor at the department of Finance at VU University Amsterdam. He is head of the VU Amsterdam School of Finance and Risk Management, and is also the Director of Graduate Studies for Finance at the Tinbergen Institute. [3]

Real options valuation, also often termed real options analysis, applies option valuation techniques to capital budgeting decisions. A real option itself, is the right—but not the obligation—to undertake certain business initiatives, such as deferring, abandoning, expanding, staging, or contracting a capital investment project. For example, the opportunity to invest in the expansion of a firm's factory, or alternatively to sell the factory, is a real call or put option, respectively. 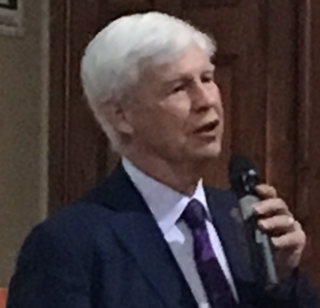 Frank J. Fabozzi is an American economist, educator, writer, and investor, currently Professor of Finance at EDHEC Business School and a Member of Edhec Risk Institute. He was previously a Professor in the Practice of Finance and Becton Fellow in the Yale School of Management. He has authored and edited many acclaimed books, three of which were coauthored with Nobel laureates, Franco Modigliani and Harry Markowitz. He has been the editor of the Journal of Portfolio Management since 1986 and is on the board of directors of the BlackRock complex of closed-end funds.

Phelim P. Boyle, is an Irish economist and distinguished professor and actuary, and a pioneer of quantitative finance. He is best known for initiating the use of Monte Carlo methods in option pricing.

Duisenberg School of Finance (DSF) was an educational organization in the Netherlands which offered Master's level education in finance between 2008 and 2015. The school was initiated as a collaborative initiative of Dutch the financial sector with local and international academic institutions. Amongst others, the founders of the initiative were Nout Wellink and Minister of the Economic Affairs, Maria van der Hoeven. The name was chosen by the founders to honor Wim Duisenberg, the first President of the European Central Bank.

Quantitative analysis is the use of mathematical and statistical methods in finance. Those working in the field are quantitative analysts. Quants tend to specialize in specific areas which may include derivative structuring or pricing, risk management, algorithmic trading and investment management. The occupation is similar to those in industrial mathematics in other industries. The process usually consists of searching vast databases for patterns, such as correlations among liquid assets or price-movement patterns. The resulting strategies may involve high-frequency trading.

Farshid Jamshidian is a finance researcher, academic and practitioner. His experience covers both fixed-income and equity research and trading. Dr. Jamshidian has made important contributions to the theory of derivatives pricing, and has published extensively, especially on interest rate modelling, amongst other contributions, developing the use of the forward measure, and "Jamshidian's trick", widely applied in the pricing of bond options. 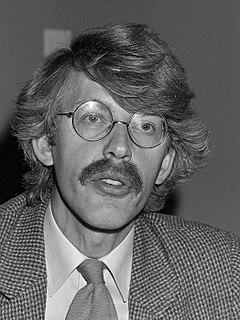 Stephen John Taylor is a semi-retired British professor of Finance at Lancaster University Management School, an authority on stochastic volatility models and option prices, a researcher in the areas of financial econometrics and mathematical finance, and an author who has published academic books and influential learned papers in Mathematical Finance, the Journal of Financial and Quantitative Analysis, the Journal of Econometrics and several other academic journals

Edith Desiree de Leeuw is a Dutch psychologist, statistician, research methodologist, and Professor in survey methodology and survey quality, at the University of Utrecht. She is known for her work in the field of survey research.

Stefan Mittnik is a German economist, currently holds the Chair of Financial Econometrics at the Ludwig Maximilian University of Munich. He is a fellow of the Center for Financial Studies and known for his work on financial market and financial risk modeling as well as macroeconometrics. He is also a co-founder of the German-British robo-advisor Scalable Capital. 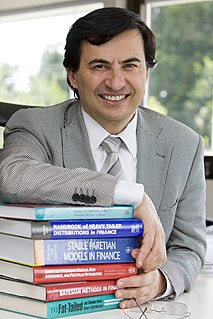 Svetlozar (Zari) Todorov Rachev is a Bulgarian mathematician who works in the field of mathematical finance, probability theory, and statistics. He is known for his work in probability metrics, derivative pricing, financial risk modeling, and econometrics. In the practice of risk management, he is the originator of the methodology behind the flagship product of FinAnalytica.