Tone Mason is a Canadian hip-hop and R&B production team from Toronto, Ontario, composed of Mellenius, Don D, and formerly, Aloysius Brown. Tone Mason speaks to a deep-rooted dedication to craftsmanship, quality and originality. With over 15 years of experience in the music industry as a collective, they have contributed their eclectic brand of music to MuchMusic & MuchVibe (theme music for The Vibe, The Downlo), Barbershop: The Next Cut, BET, EA Sports, Russell Peters' Red, White and Brown and many more.

They also contributed their production skills and music to many major label-recording artists such as Drake, Jay-Z, Fantasia, Big Boi, Busta Rhymes, 50 Cent, Kardinal Offishall, Ice Cube, Common, Jeezy, Tory Lanez, Rick Ross and The Game. The group’s production will give you diverse musical styles mixed with new flavours of today’s growing fusion of pop music. Tone Mason's depth of music in pop culture ensures that they are here to stay.

Don D. began his career in the 1990s as a member of underground hip hop group Nefarius. He served as the group's DJ and producer. After the death of group member MC Kwesro in 1999, he and MC Collizhun (the other member) released an EP, Tough Dumplin' Foundation For Better Beats, before eventually parting ways. [1] [2] Before the fall of Nefarius, he met Aloysius Brown and Mellenius, and the three acted as "production protégés" for each other. Don D. thought it would be shameful for their material to go unheard, so they formed Tone Mason. [2]

In 2003, the group produced "Back Where I've Stayed" for Choclair's Juno Award-winning album, Flagrant. However, they are mostly notable for producing Fantasia Barrino's hit single "Hood Boy" from her Grammy Award-nominated album, Fantasia , in 2006. [3]

Trevor George Smith Jr., known professionally as Busta Rhymes, is an American rapper, singer, musician, record producer, record executive, and actor. Chuck D of Public Enemy gave him the moniker Busta Rhymes, after NFL and CFL wide receiver George "Buster" Rhymes. He is known for his outlandish style and fashion sense as well as his intricate and high-speed rhyming technique. He has received 11 Grammy Award nominations for his work. 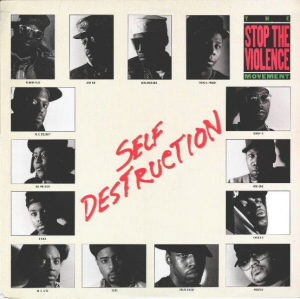 The Stop the Violence Movement was formed by rapper KRS-One in 1987 in response to violence in the hip hop and African American communities.

Jay Wayne Jenkins, known professionally as Jeezy, is an American rapper and actor. Signed to Def Jam Recordings since 2004, his major label debut Let's Get It: Thug Motivation 101 was released the following year and debuted at #2 on the Billboard 200, selling 172,000 copies in its first week and was later certified platinum by the Recording Industry Association of America (RIAA). Jeezy is credited, along with fellow Atlanta-based rappers T.I. and Gucci Mane, for helping to pioneer and popularize trap music with a mainstream audience.

The Hip Hop Honors is an annual event that airs on VH1. The television special honors old school and golden age hip hop rappers and contributors for their long-term influence and importance in the history of hip hop culture. It features live performances by most of the honorees along with new school artists who have been influenced by them in tribute. The show is taped at the Hammerstein Ballroom in Manhattan, New York City.

Rashia Tashan Fisher is an American rapper, producer, singer, model and actress better known by her stage name Rah Digga. She is best known as a longtime member of the Flipmode Squad, a hip hop group led by Busta Rhymes. She has been called "one of rap's most prominent women MCs" by Allmusic and "one of hip hop's most skilled female MCs" in the book How to Rap.

Lucas Boyd, better known by his stage name Classified, is a Canadian rapper and record producer from Enfield, Nova Scotia.

Conglomerate is a record label founded by Busta Rhymes. The label was established in 1994 as Flipmode, the name Conglomerate was later adopted in 2011. 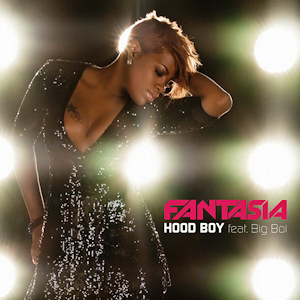 "Hood Boy" is a song by American singer Fantasia with American rapper Big Boi, from her second and eponymous studio album (2006). It was released as the album's lead single by J Records on November 14, 2006. "Hood Boy" was written by Johnta Austin, Frank DeVol, Holland-Dozier-Holland, Anthony McIntyre and Antwan Patton, and produced by Austin and the Canadian production team Tone Mason. It samples the introduction of the Supremes' 1967 single, "The Happening". An uptempo R&B song, "Hood Boy" explores Fantasia's appreciation for thugs.

The BET Hip Hop Awards are an annual awards show, airing on BET, showcasing hip hop performers, producers and music video directors. The awards ceremony began in 2006, was held on November 12, 2006 at the Fox Theatre in Atlanta, Georgia, was first aired November 15 and was hosted by comedian Katt Williams. 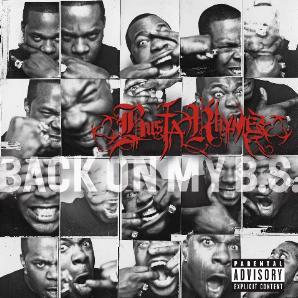 Back on My B.S. is the eighth studio album by American rapper Busta Rhymes. It was released on May 19, 2009 through Flipmode and Universal Motown. 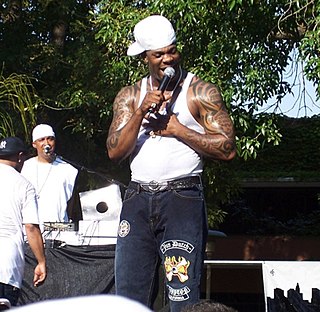 American rapper Busta Rhymes has released nine studio albums, three compilation albums, seven mixtapes, ninety-one singles, ten promotional singles and fifty-six music videos. Busta Rhymes signed his first recording contract with Elektra Records at the age of just 17, as a member of hip-hop group Leaders of the New School. Though the group would disband in 1994, a number of well-received guest appearances on songs by artists including A Tribe Called Quest and Mary J. Blige led Elektra to offer Busta Rhymes a solo contract in 1995. His debut studio album, The Coming, was released the following year, with lead single "Woo Hah!! Got You All in Check" reaching number eight on the United States Billboard Hot 100 and being certified gold by the Recording Industry Association of America (RIAA). As of 2019 Busta Rhymes has sold around 9,000,000 albums.

Dale Anthony Resteghini, better known as Rage, is a music video director. He is also a film director and music producer. Rage has helmed hundreds of videos for well-known acts from the global superstars to the emerging acts to the niche branded and as a lover of music he embraces all of them and sees each venture as a challenge and an experience. A visually prolific and explosively versatile director, his work ranges from hardcore, heavy metal, rock, punk to hip hop and rap and gangsta rap. Rage is the founder of Raging Nation with Kim Resteghini, his wife and partner. 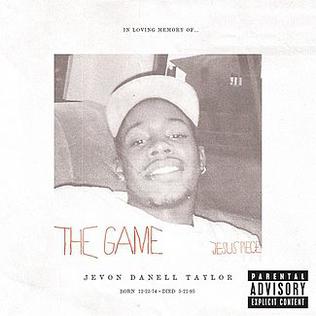 Jesus Piece is the fifth studio album by American West Coast hip hop recording artist The Game, released on December 11, 2012, by DGC Records and Interscope Records, his last release on the label. Within a three-year gap between Game's third album, LAX (2008), and his follow-up, The R.E.D. Album (2011), before the latter was finally released in August 2011. The R.E.D. Album was a fall from his previous three released album sales, but became Game's third number one album on the US Billboard 200 chart. Shortly after the release of the long delayed album, Game announced he had begun work on his fifth studio album. The album was originally meant to be titled Soundtrack to Chaos, then was changed to F.I.V.E. and finally Jesus Piece becoming Game's first concept album.

Daystar Peterson, better known by his stage name Tory Lanez, is a Canadian rapper, singer, songwriter, and record producer. He received initial recognition from the mixtape, Conflicts of My Soul: The 416 Story released in August 2013. In 2015, Tory Lanez signed to Benny Blanco's Mad Love Records through Interscope Records. Lanez released his debut studio album, I Told You on August 19, 2016, which included the singles, "Say It," and "Luv", which peaked at number 23, and 19 on the Billboard Hot 100 respectively. His second album, Memories Don't Die was released on March 2, 2018. On October 26, 2018, Lanez released his third studio album, Love Me Now?.

"CoCo" is a song by American rapper O.T. Genasis. It was released as a single on October 27, 2014 by Conglomerate Records and on November 10, 2014 by Atlantic Records. The song's title and lyrical content explicitly refer to Genasis' love of cocaine. It was produced by Juice 808. The song was certified Platinum by the Recording Industry Association of America (RIAA) February 26, 2016, for selling over 1,000,000 digital copies in the United States.