Tonio Fenech (born 5 May 1969) is a Maltese former politician who served in the government of Malta as Minister of Finance, Economy and Investment (Maltese : Ministru għall-Finanzi, l-Ekonomija u l-Investiment) from March 2008 to March 2013. [1] He was Mayor of Birkirkara from 1998 to 2003.

His first work experience was gained during the summer work phase in his Sixth Form years, on the factory floor at Multi Packaging Ltd. He joined Price Waterhouse in July 1993. Tonio's initial years at Price Waterhouse, later PricewaterhouseCoopers, were in the audit practice, where he became a manager. He subsequently moved to the management consultancy practice of the firm where he became a Senior Consultant. Tonio had a number of international work experiences with the firm in Italy and Libya. His audit experiences included the Instituto per le Opere Religiose (IOR) Vatican Bank. [ citation needed ]

Fenech was elected as a Birkirkara local councillor in March 1996 to hold political office for the first time. Following the 1998 general election, Fenech was elected Mayor of Birkirkara and held this post until April 2003 when he was elected to Parliament. Tonio contested the local council elections three times. In April 2003, he was elected Member of Parliament representing the 8th electoral District, and was subsequently appointed as observer to the European Parliament between May 2003 and March 2004. He was then appointed Parliamentary Secretary in the Ministry of Finance by Prime Minister Lawrence Gonzi on 27 March 2004. Tonio Fenech played an important role in the Ministry of Finance, and he was one of the masterminds behind Malta's accession in the EuroZone, particularly through the achievement of the Maastricht convergence criteria. Tonio Fenech was also given responsibility for the successful termination of the contractual agreements and the termination of works at Mater Dei Hospital. [ citation needed ]

Following the March 2008 general election, he was appointed as Minister of Finance, Economy and Investment on March 12, 2008. [1] Fenech was responsible for managing Malta's economy throughout the international economic and financial crisis. Despite these challenges, Malta's economy continued to register growth, while the jobless rate remained among the lowest in the European Union. Follow this Tonio Fenech was also responsible for undertaking significant national reforms, including the privatisation process at Malta Shipyards and a restructuring process at Air Malta. [ citation needed ] He did not contest the 2017 Maltese general elections.

Jack Wilson McConnell, Baron McConnell of Glenscorrodale, is a Scottish politician and a Labour life peer in the House of Lords. He was the First Minister of Scotland from 2001 to 2007. He was the Member of the Scottish Parliament for Motherwell and Wishaw from 1999 to 2011.

Lawrence Gonzi, is a Maltese politician, retired Nationalist politician and lawyer, who served for twenty-five years in various critical roles in Maltese politics. Gonzi was Prime Minister of Malta from 2004 to 2013, and leader of the Nationalist Party. He also served as speaker of the House from 1988 to 1996, and Minister of Social Policy from 1998 to 2004, as well as Deputy Prime Minister from 1999 to 2004. He served in practically all positions in Parliament, being also Leader of the House, an MP and Leader of the Opposition. 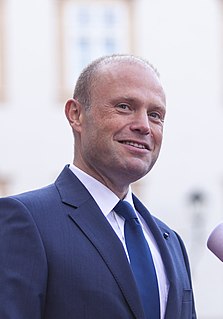 Carmelo "Carm" Mifsud Bonnici is a Maltese politician who has served in a number of Ministerial posts in the Government of Malta.

Eero Olavi Heinäluoma is a Finnish politician who has been serving as Member of the European Parliament since 2019. A former chairman of the Finnish Social Democratic Party, he was replaced in the party's leadership by Jutta Urpilainen in June 2008. He was Speaker of the Parliament of Finland 2011–2015.

St Aloysius College (SAC) is fee-charging Catholic college run by the Jesuits in Birkirkara, Malta. It was founded in 1907 to complement the seminaries and tertiary institutions already in existence on the island. Today it is a boys' primary and secondary school with a coeducational sixth form. The College compound also houses a parish church which is used by the school and opened to the public.

Agostino Pio "Austin" Gatt is a former Maltese politician, who served in a number of ministerial posts.

Albert Kan-Dapaah is a Ghanaian chartered accountant and politician. He is currently the Minister of National Security. He was appointed by President Akuffo-Addo on 10 January 2017.

Georges Fenech is a French judge and politician.

Aaron Farrugia is a Maltese Partit Laburista politician and the Minister for the Environment, Climate Change & Planning in Prime Minister Robert Abela’s cabinet in early 2020, and served as Parliamentary Secretary for European Funds and Social Dialogue in former Prime Minister Joseph Muscat’s cabinet. 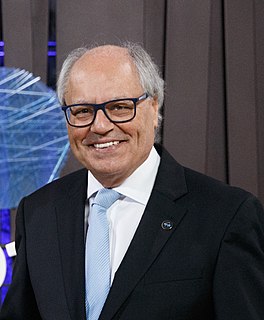 Edward Scicluna is an economist and Finance Minister of Malta. He is a Member of Parliament elected on behalf of the Maltese Labour Party.

Paul Fenech is a footballer who plays for Maltese Premier League side Balzan FC, where he plays as a midfielder.

The Nationalist Party Shadow Cabinet of Dr Simon Busuttil was announced on May 14, 2013. It was formed following the 9 March election which replaced the PN majority with a Labour majority.

Christian Cardona is a Maltese politician and lawyer. He was a Member of Parliament for the Maltese Labour Party and was elected Deputy Leader for Party Affairs in 2016. He served as Malta's Minister for the Economy, Investment and Small Business between 2013 and 2020.

Jason Azzopardi is a Maltese politician. He graduated as Doctor of Laws with a master's degree in financial services from the University of Malta in 1996 and that year he started practicing as a private criminal lawyer in the courts of Malta.

Naci Ağbal is a Turkish politician and former civil servant from the Justice and Development Party (AKP) who currently serves as the Minister of Finance as of 24 November 2015. He has been the Member of Parliament for the electoral district of Bayburt since the June 2015 general election. He previously served as the Undersecretary to the Ministry of Finance between 2009 and 2015, resigning in order to contest the election.