Drafted 68th overall in the 1988 NHL Entry Draft by the New York Rangers, Amonte is best known for his time as a scoring star with the Chicago Blackhawks and for representing the United States in international play. Amonte made his debut in the 1991 playoffs. He impressed as a rookie, scoring over 30 goals and placing third in the balloting for the Calder Memorial Trophy. He played three seasons with the Rangers, scoring 84 goals, before being traded to the Chicago Blackhawks with seven games to go in the 1993–94 season, the year the Rangers went on to win the Stanley Cup. He gained stardom in Chicago where he was initially reunited with former Thayer Academy teammate Jeremy Roenick, scoring at least 30 goals six times and at least 40 three times, including having a five-season-long streak in which he did not miss a single game.

Amonte, playing for Team USA, won the Gold Medal in the 1996 World Cup of Hockey tournament. Amonte scored the game-winning goal with just two and a half minutes left in the final against Team Canada. [1]

He began the 2002–03 season with the Phoenix Coyotes and was traded to the Philadelphia Flyers near the end of the season. Amonte signed with the Calgary Flames as a free agent on August 2, 2005, and scored his 400th NHL goal for the Flames on December 10, 2005, against the Ottawa Senators.

As of March 2020, he is ranked 13th all-time in points among American-born players, with 900. He announced his retirement via his personal website. [2]

Played for the United States in:

On June 11, 2010, Tony was named the new head coach of the hockey program at his alma mater, Thayer Academy in Braintree, Massachusetts. [4]

Amonte and his wife Laurie have two sons and two daughters.

Amonte's sister is Kelly Amonte Hiller, head coach of women's lacrosse at Northwestern University. Hiller has guided the team to seven National Titles. Hiller was also a four-time All-American at the University of Maryland, College Park and two-time NCAA Division 1 Player of the Year in 1995 and 1996.

Tony is a cousin of NHL player Charlie Coyle, who currently plays for the Boston Bruins. [5] 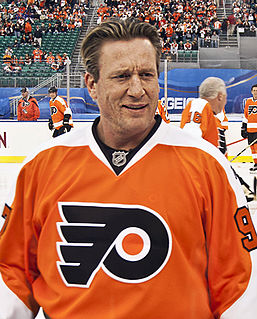 Jeremy Shaffer Roenick (; born January 17, 1970) is an American former professional ice hockey player who played the majority of his career in the National Hockey League (NHL). He was drafted 8th overall in the 1988 NHL Entry Draft by the Chicago Blackhawks, for whom he played from 1988 to 1996. Roenick subsequently played for the Phoenix Coyotes, Philadelphia Flyers, Los Angeles Kings and San Jose Sharks over the course of his 20 NHL season career. He also represented Team USA in several international tournaments. On November 10, 2007, he became the third American-born player to score 500 goals. 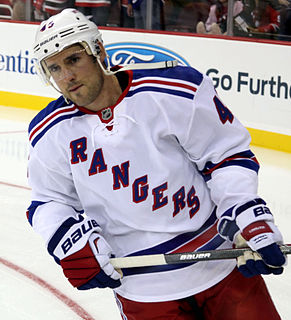 Daymond Randolph Langkow is a Canadian former professional ice hockey centre. He was the fifth overall selection of the Tampa Bay Lightning at the 1995 NHL Entry Draft. He played junior hockey with the Tri-City Americans in the Western Hockey League (WHL) and is their franchise record holder for career goals at 159. He won the Bob Clarke Trophy in 1995 as the WHL scoring leader with 140 points, and competed with the Canadian junior team at the 1996 World Junior Ice Hockey Championships where he won a gold medal.

The 1990–91 NHL season was the 74th season of the National Hockey League. The Stanley Cup winners were the Pittsburgh Penguins, who won the best of seven series 4–2 against the Minnesota North Stars. This was the last NHL season to end in May.

Norman Steven Maciver is a Canadian professional ice hockey executive and former player. He is currently an assistant general manager for the Chicago Blackhawks of the National Hockey League (NHL). As a player, he played defence for six teams in the NHL during a thirteen-year professional career. 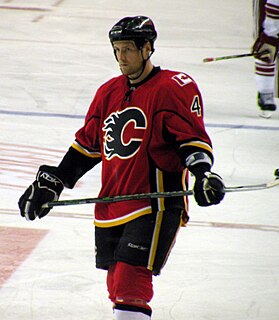 Timothy M. Jackman is an American former professional ice hockey player. He was the first player from Minnesota State University, Mankato to be drafted after becoming the Columbus Blue Jackets' second round selection, 38th overall, at the 2001 NHL Entry Draft. Jackman made his NHL debut during the 2003–04 season with Columbus, and has also played for the Phoenix Coyotes, Los Angeles Kings, New York Islanders, Calgary Flames and Anaheim Ducks. 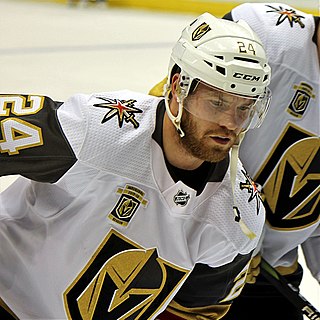 Oscar Lindberg is a Swedish professional ice hockey forward who is currently playing with HC Dynamo Moscow of the Kontinental Hockey League (KHL). He previously played for the New York Rangers, the Vegas Golden Knights and the Ottawa Senators in the National Hockey League (NHL). He represented Sweden in the 2011 World Junior Ice Hockey Championships. He also represented Sweden on their gold medal-winning 2013 IIHF World Championship team. 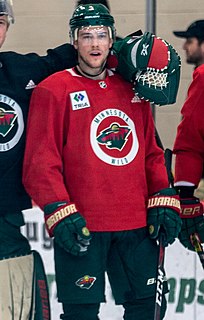 Charles Robert Coyle is an American professional ice hockey forward currently playing for the Boston Bruins of the National Hockey League (NHL). He has also played for the Minnesota Wild. 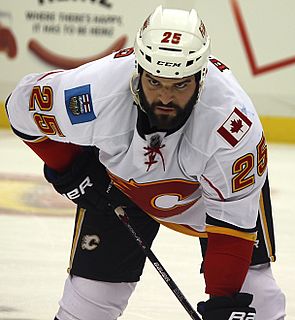 Brandon D. Bollig is an American former professional ice hockey player. An undrafted player, Bollig signed with the Chicago Blackhawks organization in 2010 after playing college hockey for St. Lawrence University. He made his NHL debut in 2012 and was a member of Chicago's Stanley Cup championship team in 2013. The Calgary Flames acquired Bollig in a draft-day trade on June 28, 2014.