Tony Forsberg (born 13 August 1933) is a Swedish cinematographer. At the 28th Guldbagge Awards he won the award for Best Cinematography for the film Sunday's Children . [1] He has worked on more than 60 films and television shows between 1955 and 2002.

The 28th Guldbagge Awards ceremony, presented by the Swedish Film Institute, honored the best Swedish films of 1992, and took place on 1 March 1993. House of Angels directed by Colin Nutley was presented with the award for Best Film. 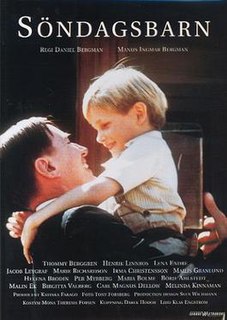 Sunday's Children is a 1992 Swedish drama film directed by Daniel Bergman and written by Ingmar Bergman. At the 28th Guldbagge Awards the film won the award for Best Cinematography and Thommy Berggren was nominated for Best Actor. 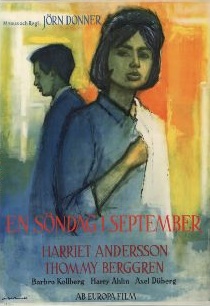 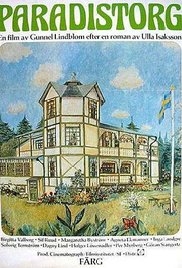 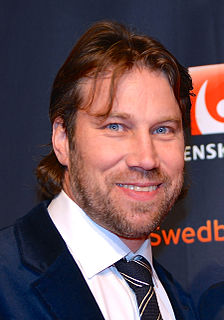 Peter Mattias "Foppa" Forsberg is a Swedish retired professional ice hockey player and was for a time assistant general manager of Modo Hockey. Known for his on-ice vision and physical play, Forsberg is considered one of the greatest players of all time. Although his career was shortened by persistent injuries, as of 2014, he stands eighth all-time in career points-per-game and fourth all-time in career assists-per-game in the NHL, only behind Wayne Gretzky, Mario Lemieux and Bobby Orr. In 2017 Forsberg was named one of the '100 Greatest NHL Players' in history. 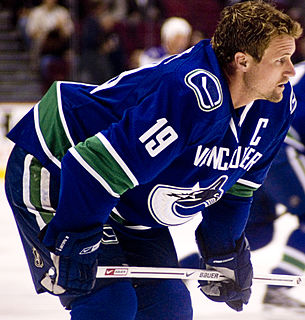 Markus Sten Näslund is a Swedish retired ice hockey player and former general manager for Modo Hockey of the Swedish Hockey League. He played in the National Hockey League (NHL) for the Pittsburgh Penguins, Vancouver Canucks and New York Rangers, as well as in the Elitserien with Modo Hockey. Nicknamed "Nazzy" by Canucks fans and "Macke" or "Mackan" in his native Sweden, he was known for his offensive skills, particularly his wrist shot and stickhandling. 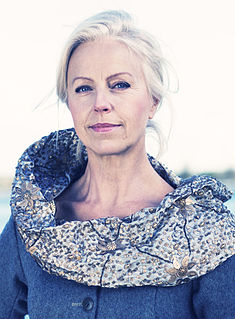 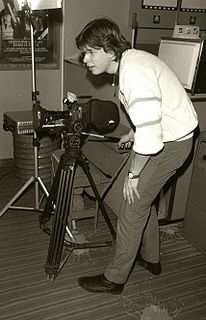 Guldhjälmen is a Swedish ice hockey award, which is awarded annually to the Swedish Hockey League (SHL)'s most valuable player as decided by a vote of its players. 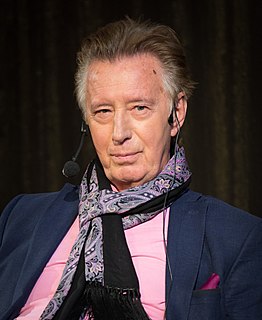 Thommy Berggren, né Tommy William Berggren is a Swedish actor. He is known for having starred in several films directed by Bo Widerberg, and was often considered as one of the foremost Swedish film and theatre actors from the early 1960s to the mid-2000s when he retired. 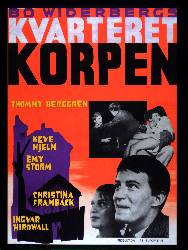 Erik Halvar Bertil Björk was a Swedish actor. He worked at the Malmö City Theatre from 1962 till 1986, but also made many substantial film- and TV-roles; for example, he acted in Autumn Sonata (1978) and Sunday's Children (1992) by Ingmar Bergman and The Emigrants (1971) and The New Land (1972) by Jan Troell. 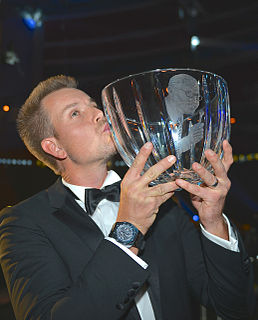 Radiosportens Jerringpris is a prize established by Radiosporten, the sport section of Sveriges Radio, voted by its radio audience who choose the Swedish athlete or team that has made the best sport performance of the year. The prize is named after Swedish radio personality Sven Jerring. It is also called "the prize of the people", since it is the radio audience who vote. There has around 2010-2019 been criticism on the fact that there has been campaigns within sports with many amateurs, so that golf and horse jumping has been awarded. 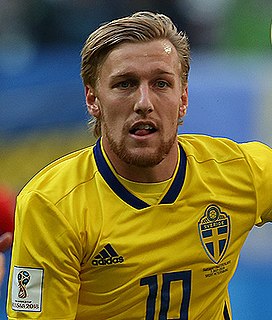 Emil Peter Forsberg is a Swedish professional footballer who plays for RB Leipzig as a winger, and the Sweden national team. He was voted the Swedish Midfielder of the Year in 2014, 2016 and 2017. He was a member of the Sweden squad which reached the quarterfinals of the 2018 World Cup. He is known for his quick, effective passing style, and is a creative playmaker renowned for his ability to create chances and assists. 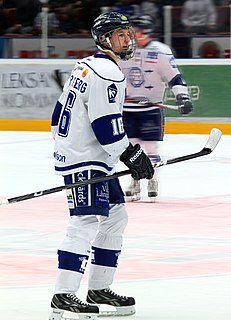 Carl Filip Anton Forsberg is a Swedish professional ice hockey player and alternate captain for the Nashville Predators of the National Hockey League (NHL). Forsberg was selected by the Washington Capitals in the first round, 11th overall, of the 2012 NHL Entry Draft.

The 1st Guldbagge Awards ceremony, presented by the Swedish Film Institute, honored the best Swedish films of 1963 and 1964, and took place on 25 September 1964. The Silence directed by Ingmar Bergman was presented with the award for Best Film.

The 7th Guldbagge Awards ceremony, presented by the Swedish Film Institute, honored the best Swedish films of 1969 and 1970, and took place on 26 October 1970. A Swedish Love Story and Mistreatment were presented with the award for Best Film.

Lars Lennart Forsberg was a Swedish film director and screenwriter. At the 7th Guldbagge Awards his film Mistreatment won the awards for Best Film and Best Director. He directed 20 films between 1969 and 2005.