Tony Greene (1955, San Francisco, CA - 1990, Los Angeles, CA) was a visual artist whose work combines photographic imagery with an overlay of thickly applied decorative patterns or calligraphic letterforms. Rarely exhibited during his lifetime (he died of AIDS-related illness at age 35), his work has subsequently staged what the Los Angeles Times describes as "a remarkable posthumous comeback," [1] including a mini-retrospective of Greene's work as part of the 2014 Whitney Biennial exhibition, and additional exhibitions held in Chicago and Los Angeles during 2014, including the UCLA Hammer Museum's biennial "Made in LA" exhibition.

Greene was awarded an MFA degree from California Institute of the Arts in 1987. His classmates there included the artists Richard Hawkins and Catherine Opie, who jointly curated Greene's 2014 exhibition in the Whitney Biennial. [2]

David Evans Frantz, curator at ONE National Gay & Lesbian Archives curated a "show within a show" in the Hammer Museum's Made in LA Biennial, featuring Tony Greene's opulent paintings from 1987-1990, alongside queer and activist artists, documents, and ephemera in dialogue with his work. [3]

Raymond Pettibon is an American artist who lives and works in New York City. Pettibon came to prominence in the early 1980s in the southern California punk rock scene, creating posters and album art mainly for groups on SST Records, owned and operated by his older brother, Greg Ginn. He has subsequently become widely recognized in the fine art world for using American iconography variously pulled from literature, art history, philosophy, and religion to politics, sport, and sexuality. 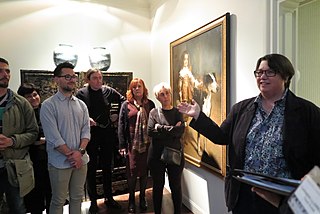 Catherine Sue Opie is an American fine-art photographer. She lives and works in West Adams, Los Angeles, as a tenured professor of photography at University of California at Los Angeles (UCLA).

Kenny Scharf is an American painter known for his participation in New York City's interdisciplinary East Village art scene during the 1980s, alongside Jean-Michel Basquiat and Keith Haring, Scharf's do-it-yourself practice spanned painting, sculpture, fashion, video, performance art, and street art. Growing up in post-World War II Southern California, Scharf was fascinated by television and the futuristic promise of modern design. His works often includes pop culture icons, such as the Flintstones and the Jetsons, or caricatures of middle-class Americans in an apocalyptic science fiction setting.

Robert Gober is an American sculptor. His work is often related to domestic and familiar objects such as sinks, doors, and legs.

Millie Wilson is an artist and teacher who lives and works in Austin, Texas. Wilson was a member of the faculty in the Program in Art at The California Institute of the Arts from 1985 to 2014.

Dawn Kasper is a New York-based interdisciplinary artist working across genres of performance, installation, sculpture, drawing, photography, video, and sound. Her often improvisational work derives from a "fascination with existentialism, subjects of vulnerability, desire, and the construction of meaning." Kasper uses props, costume, comedy, gesture, repetition, music, and monologue to create what she refers to as "living sculptures."

Eric Wesley is an American artist. Wesley was born in Los Angeles, California, where he continues to live and work. He has held solo exhibitions in galleries internationally as well as at the Museum of Contemporary Art, Los Angeles and Foundation Morra Greco, Naples, Italy.

Joel Otterson is an American artist who lives and works in Los Angeles, CA.

Ilene Segalove is a conceptual artist working with appropriated images, photography and video whose work can be understood as a precursor to The Pictures Generation.

Richard Hawkins is an American artist. He lives and works in Los Angeles. His works are held by museums including the Whitney Museum of American Art, the Museum of Modern Art, and the Art Institute of Chicago.

Lisa Lapinski is an American visual artist who creates dense, formally complex sculptures which utilize both the language of traditional craft and advanced semiotics. Her uncanny objects interrogate the production of desire and the exchange of meaning in an image-based society. Discussing a group show in 2007, New York Times Art Writer Holland Cotter noted, "An installation by Lisa Lapinski carries a hefty theory- studies title: 'Christmas Tea-Meeting, Presented by Dialogue and Humanism, Formerly Dialectics and Humanism.' But the piece itself just looks breezily enigmatic." It is often remarked that viewers of Lapinski's sculptures are enticed into an elaborate set of ritualistic decodings. In a review of her work published in ArtForum, Michael Ned Holte noted, "At such moments, it becomes clear that Lapinski's entire systemic logic is less circular than accumulative: What at first seems hermetically sealed is often surprisingly generous upon sustained investigation." Lapinski's work has been exhibited widely in the US and Europe, and she was included in the 2006 Whitney Biennial.

Harry Dodge is an American sculptor, performer, video artist, and writer. His solo exhibitions have included works in New York, Los Angeles and Connecticut, while his group exhibitions have taken place at The New Museum, the Whitney Biennial, the Getty Museum and the Hammer Museum, among others. He was the recipient of a Guggenheim Fellowship in 2017 and is the author of the book My Meteorite: Or, Without the Random There Can Be No New Thing.

Jennifer Moon is a conceptual artist and life-artist living in Los Angeles. She was born in Lafayette, Indiana and completed her BA at UCLA and Master's at Art Center College of Design.

Zackary Drucker is an American trans woman multimedia artist, cultural producer, LGBT activist, actress, and television producer. She is an Emmy-nominated producer for the docu-series This Is Me, a consultant on the TV series Transparent, and is based out of Los Angeles. Drucker is an artist whose work explores themes of gender and sexuality and critiques predominant two-dimensional representations. Drucker has stated that she considers discovering, telling, and preserving trans history to be not only an artistic opportunity but a political responsibility. Drucker's work has been exhibited in galleries, museums, and film festivals including but not limited to the 2014 Whitney Biennial, MoMA PS1, Hammer Museum, Art Gallery of Ontario, Museum of Contemporary Art San Diego, and the San Francisco Museum of Modern art.

Jennifer Pastor is an American sculptor and Professor of Visual Arts at the University of California Irvine. Pastor examines issues of space encompassing structure, body and object orientations, imaginary forms, narrative and progressions of sequence.

Drew Heitzler is an American artist best known for his film and video work. Heitzler lives and works in Venice, California.

Carole Ann Klonarides is an American curator, video artist, writer and art consultant that has been based in New York and Los Angeles. She has worked in curatorial positions at the Santa Monica Museum of Art (1997–2000) and Long Beach Museum of Art (1991–95), curated exhibitions and projects for PS1 and Museum of Modern Art (MOMA), Laforet Museum (Tokyo), and Video Data Bank, among others, and been a consultant at the Getty Research Institute. Klonarides emerged as an artist among the loosely defined Pictures Generation group circa 1980; her video work has been presented in numerous museum exhibitions, including "Video and Language: Video As Language", "documenta 8," "New Works for New Spaces: Into the Nineties,", and "The Pictures Generation, 1974-1984", and at institutions such as MoMA, the Smithsonian Hirshhorn Museum, Contemporary Arts Center, the New Museum, The Kitchen, and School of the Art Institute of Chicago (2016). Her work belongs to the permanent collections of MoMA, the Whitney Museum of American Art, Getty Museum, Centre Pompidou, Contemporary Arts Museum Houston, Museu-Fundacão Calouste Gulbenkian (Lisbon), Museo Nacional Centro de Arte Reina Sofía (Madrid), and National Gallery of Canada, and is distributed by the Video Data Bank and Electronic Arts Intermix (EAI).

Larry Johnson is an American artist living and working in Los Angeles. Johnson uses a combination of contemporary and antiquated photographic techniques.