The Whitney Biennial is a biennial exhibition of contemporary American [1] art, typically by young and lesser known artists, on display at the Whitney Museum of American Art in New York City, United States. The event began as an annual exhibition in 1932, the first biennial was in 1973. The Whitney show is generally regarded as one of the leading shows in the art world, often setting or leading trends in contemporary art. It helped bring artists like Georgia O'Keeffe, Jackson Pollock, and Jeff Koons to prominence. [2]

In 2010, for the first time a majority of the 55 artists included in that survey of contemporary American art were women. [3] The 2012 exhibition featured 51 artists, the smallest number in the event's history. [4]

The fifty-one artists for 2012 were selected by curator Elisabeth Sussman and freelance curator Jay Sanders. [5] It was open for three months up to 27 May 2012 and presented for the first time "heavy weight" on dance, music and theatre. Those performance art variations were open to spectators all day long in a separate floor. [6]

The Whitney Museum had a long history beginning in 1932 of having a large group exhibition of invited American artists every year called the 'Whitney Annual'. In the late sixties, it was decided to alternate between painting and sculpture, although by the 1970s the decision was to combine both together in a biennial. The first Biennial occurred in 1973. Since then, the biennials have pursued a different curatorial approach to include all media.

In the past the Whitney Museum has tried different ways to organize its biennial. It has used its own staff members and invited outside curators, including Europeans, to present the show. In 2010 it even asked a former art dealer, Jay Sanders, who would later become a Whitney curator, to help organize one. [7]

The Whitney Biennial often extends to sculpture exhibitions in Central Park. [8] The 2008 edition took over the Park Avenue Armory as a space for performance and installation art. The 2014 Whitney Biennial is the last one in the museum's Marcel Breuer building. The museum is leaving the Upper East Side for the meatpacking district, where it is scheduled to open its new building, designed by Renzo Piano, in 2015. [7]

In 1987, the show was protested by the Guerrilla Girls for its alleged sexism and racism.

Still referred to as the "political" biennial, the 1993 edition included works like Pepón Osorio's installation Scene of the Crime (Whose Crime?) of a Hispanic family's living room and Daniel Joseph Martinez's metal buttons bearing the message "I can't imagine ever wanting to be white." [9] The 1993 Whitney Biennial was the most diverse exhibit by a major American museum up until that time. [10] In 1970 less than 1% of artists at the Whitney Museum were non-white. In 1991, only 10% of artists were non white. Vanessa Faye Johnson claimed that despite intentions, the "lack of exchange and dialogue, the simplification of complex issues in the Biennial" effectively cast the artists largely as victims in the eyes of the public. New York Times Art Critic, Roberta Smith called it "pious, [and] often arid. [11] " Art Historian Robert Hughes vehemently criticized lack of painting, and the "wretched pictorial ineptitude" of the artists, dismissed the abundance of text as "useless, boring mock documentation", and mocked the focus on "exclusion and marginalization ... [in] a world made bad for blacks, Latinos, gays, lesbians and women in general. [12] " The largely shared sentiment was that the public felt alienated by the confrontational demands of the artwork. It was the first Whitney Biennial to treat video works with the same attention to space as sculpture, designating two entire galleries to them. Text-heavy Installations demanded attention and participation from the audience. The artists made it extremely difficult to take in the work as a passive viewer.

Since 2000, the Bucksbaum Award has been awarded to an artist exhibiting at the Biennial.

The 2014 Whitney Biennial was also somewhat controversial for its lack of diversity, 9 out of the 109 artists were black or African American, [13] including Donelle Woolford, a fictional character developed by 52-year-old white artist Joe Scanlan. She was the only black female artist included in curator Michelle Grabner's exhibition. Eunsong Kim and Maya Isabella Mackrandilal criticized the piece: "The insertion of people of color into white space doesn't make it less colonial or more radical—that's the rhetoric of imperialistic multiculturalism, a bullshit passé theory." and suggest this pieces treats "othered bodies [as] subcontractable. [14] "

Additionally, The YAMS Collective, or HOWDOYOUSAYYAMINAFRICAN?, a collective of 38 mostly black and queer artists, writers, composers, academics, filmmakers and performers participated and withdrew from the 2014 Biennial [15] as a protest of the Whitney Museum's policies. [16]

Yams Collective member and artist Sienna Shields said "Every Whitney Biennial I have ever been to, you can barely count the number of black artists in the show on one hand. I didn't want to be a part of that," Shields said. "There are so many amazing artists of color that I have known in the past 12 years in New York that are essentially overlooked. But I just felt it was time for an intervention." Poet Christa Bell explained: "[O]ur entire participation was a protest... Just because people don't know that doesn't mean it is any less of a protest. Withdrawal was the final act of protest. Black people en masse being inside of an institution like the Whitney, presenting art, is itself a form of protest. We just followed it through to its inevitable conclusion." [17]

The 2017 Whitney Biennial featured a controversial painting of Emmett Till, entitled Open Casket by Dana Schutz, which sparked protest and a highly circulated petition calling for the painting to be removed and destroyed. [18] 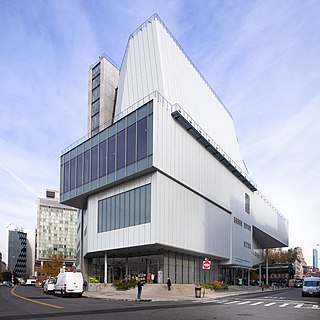 The Whitney Museum of American Art, known informally as the "Whitney", is an art museum in Manhattan. It was founded in 1930 by Gertrude Vanderbilt Whitney (1875–1942), a wealthy and prominent American socialite and art patron after whom it is named.

Maurizio Cattelan is an Italian artist. Known primarily for his hyperrealistic sculptures and installations, Cattelan's practice also includes curating and publishing. His satirical approach to art has resulted in him being frequently labelled as a joker or prankster of the art world. Self-taught as an artist, Cattelan has exhibited internationally in museums and Biennials. In 2011 the Guggenheim Museum, New York presented a retrospective of his work. Some of Cattelan's better-known works include America, consisting of a solid gold toilet; La Nona Ora, a sculpture depicting a fallen Pope who has been hit by a meteorite; and Comedian, a fresh banana duct-taped to a wall.

Dana Schutz is an American artist who lives and works in Brooklyn, New York. Schutz is known for her gestural, figurative paintings that often take on specific subjects or narrative situations as a point of departure. 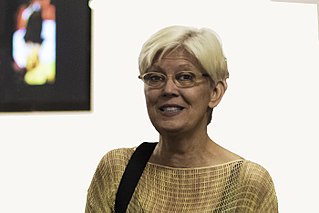 Amy Sillman is an American painter. Her artistic practice also includes drawings, cartoons, collage, iPhone video, and zines. Sillman is Co-chair, Painting at the Milton Avery Graduate School of the Arts at Bard College, and a Professor of Fine Arts at the Städelschule.

Joan Snyder is an American painter from New York. She is a MacArthur Fellow, a Guggenheim Fellow, and a National Endowment for the Arts Fellow (1974).

Naomi Beckwith is a senior curator at the Museum of Contemporary Art, Chicago. Beckwith joined the curatorial staff in May 2011.

Hannah Black is a visual artist, critic, and writer. Her work spans video, text and performance and draws on communism, feminist, and Afro-pessimist theory, autobiographical fragments and pop music. She is best known for her open letter criticizing the curators of the 2017 Whitney Biennial for exhibiting Dana Schultz's painting Open Casket. 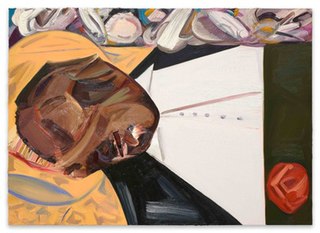 Open Casket is a 2016 painting by Dana Schutz. The subject is Emmett Till, a black 14-year-old boy who was lynched by two white men in Mississippi in 1955. It was one of the works included at the 2017 Whitney Biennial exhibition in New York curated by Christopher Y. Lew and Mia Locks. The painting caused controversy, with protests and calls for the painting's destruction. These may have been merely rhetorical. Protests inside the museum petered out in a day or two.

Sienna Shields is an American abstract artist specializing in large-format collage pieces. She was also the chief organizer of the HowDoYouSayYaminAfrican? artist collective and the director of its digital work, Good Stock on the Dimension Floor: An Opera which was accepted for the 2014 Whitney Biennial.

Jane Panetta is a New York-based curator and art historian. Panetta is currently an Associate Curator at the Whitney Museum of American Art.

Rujeko Hockley is a New York-based US curator. Hockley is currently an Assistant Curator at the Whitney Museum of American Art.

Anthony Elms is an American curator, writer, and artist based in Philadelphia. In 2015, Elms was named Chief Curator at the ICA Philadelphia.

HowDoYouSayYamInAfrican? is a collective founded in 2013. The group, also called the YAMS Collective, was formed to bring a digital media piece titled Good Stock on the Dimension Floor: An Opera to the 2014 Whitney Biennial exhibition at the Whitney Museum of American Art.

Chrissie Iles is a British-American art curator, critic, and art historian. She is the Anne & Joel Ehrenkranz Curator at the Whitney Museum of American Art in New York City.