Lancashire born Tony Kirkham moved to Surrey to become a forestry apprentice with Tilhill Forestry Nurseries aged 16. After a time spent working in Hamburg learning about tree management within urban and park environments he moved to Kew to study the world-famous Diploma in Horticulture to broaden his knowledge in horticulture.

The only student to be offered a job at Kew upon graduation, he spent the next 14 years managing part of Kew's arboretum. During this time, he completed several plant collecting expeditions in East Asia, including South Korea, Taiwan, the Russian Far East and Sakhalin, China and Japan. to add to Kew's collection and replace trees lost in the Great Storm of 1987.

He currently holds the top job in arboriculture as Kew's Head of Arboretum, Gardens and Horticultural Services where he and his team amongst many other things manage 14,000 trees and share their passion for trees with the visitors to Kew. He is the author of four books and ran the ‘Treeathlon’ to support the Trees for Cities campaign for more trees in urban areas in the UK, and says that “looking at trees anywhere in the world” is one of his hobbies.

In 2009 he was awarded the Associate of Honour by the RHS for his services to horticulture. Only 100 people to hold this award in the British Isles.

In 2015 he was awarded Honorary Lifetime fellow of the Arboricultural Association recognising the significant and positive impact he has made to Arboriculture.

In 2019 he was awarded the Victoria Medal of Honour (VMH). [2] The award was established in 1897 "in perpetual remembrance of Her Majesty's glorious reign, and to enable the RHS Council to confer honour on British horticulturists." Only sixty-three horticulturists can hold the VMH at any given time, in commemoration of the sixty-three years of Queen Victoria's reign. [3]

He was also awarded the MBE in the Queen's New Years Honours list in 2019 for services to the Royal Botanic Gardens, Kew and Arboriculture.

Kirkham sits on many professional committees including the International Dendrology Society, science and education committee, RHS, awards committee and is a vice chair of the RHS woody plant committee.

Trustee of the Tree Register of Britain and Ireland (TROBI), trustee of the Yorkshire Arboretum at Castle Howard and trustee of the Chelsea Physic Garden where he also serves as the Chairman of the Advisory Committee.

Charles Sprague Sargent was an American botanist. He was appointed in 1872 as the first director of Harvard University's Arnold Arboretum in Boston, Massachusetts, and held the post until his death. He published several works of botany. The standard botanical author abbreviation Sarg. is applied to plants he identified.

A plantsman is an enthusiastic and knowledgeable gardener, nurseryman or nurserywoman. "Plantsman" can refer to a male or female person, though the terms plantswoman, or even plantsperson, are sometimes used. The word is sometimes said to be synonymous with "botanist" or "horticulturist", but that would indicate a professional involvement, whereas "plantsman" reflects an attitude to plants. A horticulturist may be a plantsman, but a plantsman is not necessarily a horticulturist. 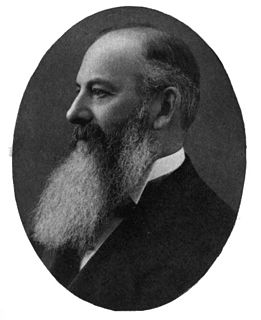 Sir Harry James Veitch was an eminent English horticulturist in the nineteenth century, who was the head of the family nursery business, James Veitch & Sons, based in Chelsea, London. He was instrumental in establishing the Chelsea Flower Show, which led to him being knighted for services to horticulture. 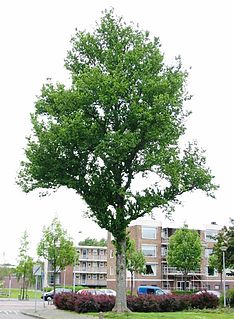 Tony Lord is a United Kingdom gardener, photographer and author. In 2005 the Royal Horticultural Society awarded him the Victoria Medal of Honour (V.M.H) for his work as a garden photographer, horticultural consultant and writer.

Roy Hay MBE, VMH was a British horticultural journalist and broadcaster. He was the author of many publications and the instigator of many organisations and events, including the annual Britain in Bloom competition. 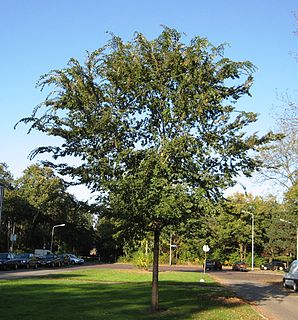 Ulmus parvifolia, commonly known as the Chinese elm or lacebark elm, is a species native to eastern Asia, including mainland China, Taiwan, Japan, North Korea, South Korea and Vietnam. It has been described as "one of the most splendid elms, having the poise of a graceful Nothofagus".

Raymond John Evison OBE, VMH, is a nurseryman, lecturer, author and photographer. Born in 1944 he started his horticultural career at the age of 15 in Shropshire and moved to the island of Guernsey to set up The Guernsey Clematis Nursery in 1984.

William Jackson Bean was a British botanist and plantsman, who was curator of Kew Gardens from 1922 to 1929. He was responsible for some of the present collections of trees and woody plants there.

Donald Wyman was an American horticulturist, the head of horticulture at Harvard University's Arnold Arboretum from 1935 to 1970.

Brian Frederick Mathew MBE, VMH is a British botanist, born in the village of Limpsfield, Surrey, England. His particular area of expertise is bulbous plants, particularly ornamental bulbous plants, although he has contributed to other fields of taxonomy and horticulture. He has authored or co-authored many books on bulbs and bulbous genera which appeal to both botanists and gardeners, as well as specialist monographs on other genera, including Daphne, Lewisia, and Helleborus. His work has been recognized by the British Royal Horticultural Society and the International Bulb Society. 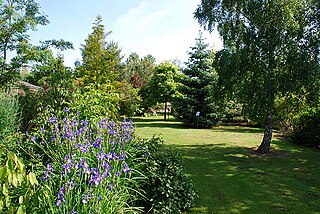 Bluebell Arboretum is an arboretum and associated plant nursery near the village of Smisby in South Derbyshire, England. It is a Royal Horticultural Society recommended garden, comprising a large selection of rare trees, shrubs and climbers growing in a woodland garden. Planting was started by the owners, Suzette and Robert Vernon in 1992 on what was then a six acre meadow, just under 500 feet above sea level. The arboretum was officially opened by Roy Lancaster, OBE VMH in 1997, and has since been expanded and is now open to the public throughgout the year, excluding Sundays during the winter months. 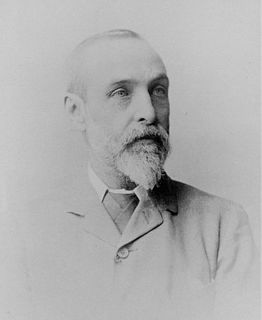 George Nicholson, was an English botanist and horticulturist, amongst 60 awarded the Victoria Medal of Honour by the Royal Horticultural Society in 1897 for their contributions to horticulture. He is noted for having edited "The Illustrated Dictionary of Gardening", produced as an eight-part alphabetical series between 1884 and 1888 with a supplement, and published by L. Upcott Gill of London.

George Ware, Ph.D. (1924–2010) was an American dendrologist and former research director of the Morton Arboretum Illinois who specialized in the evaluation of Asiatic species of elm as urban trees.

Carolyn HardyOBE was a leading horticulturalist in the UK. She chaired the National Gardens Scheme (1979-1986) and was vice-chair of the Royal Horticultural Society for 10 years.

William A. McNamara is an American horticulturist and expert in the field of plant conservation and the flora of Asia. Now retired, he was President and Executive Director of Quarryhill Botanical Garden, a 25-acre wild woodland garden in Northern California's Sonoma Valley featuring wild-sourced plants from East Asia. In 2017, he and Quarryhill Botanical Garden celebrated their 30th Anniversary.

David Charles McClintock, MBE, VMH, FLS (1913–2001) was an English natural historian, botanist, horticulturist and author. McClintock was notably active in the worlds of natural history, horticulture and botany within the UK and Europe. He was the co-author of a popular flora, which sold a quarter of a million copies, and of many other books, papers and reviews. He recorded more than 3,000 species in the British Isles gathered from throughout the UK and seen a vast range of rarities – aliens being a particular focus. An amateur, McClintock also worked across the worlds of botany and horticulture, and organised a scientific survey of the natural history of Buckingham Palace Garden. He has been described as " one of the most distinguished and productive amateur botanists of his generation".

(The Telegraph) Climate change: why we need to change our taste in trees