Anthony Gerard Larkin OBE (born 12 January 1956) is an English former professional footballer, and manager and coach of the England blind football team, which is based at the Royal National College for the Blind in Hereford. Larkin is also the former head of sport and recreation at the college, [1] as well as Patron of the disability sports charity British Blind Sport.

During a footballing career spanning fifteen years Larkin made over 450 professional appearances for teams including Everton, Wrexham, Shrewsbury Town, Carlisle and Hereford United. [1] It was while he was playing for Shrewsbury that he first became involved with the Royal National College after doing some voluntary work there. Impressed with the enthusiasm of the students he returned to RNC to coach sports after finishing his playing career at Hereford United. He then qualified as a mobility instructor and blind football coach, and now runs training sessions for other coaches from around the United Kingdom and throughout Europe.

Under Larkin's stewardship the England squad qualified as Great Britain's entry for the 2008 Paralympic Games after finishing runners-up to Spain in the European Championships in 2006. [2] He has also led them to seven European Championship and to four World Championships. The team are currently ranked second in Europe and fifth in the World.

Larkin was instrumental in helping to establish the United Kingdom's first football academy for visually impaired players. [2] [3] The Football Academy, which is based at the Royal National College, was officially opened in August 2008 by former England footballer Sir Trevor Brooking and offers visually impaired students the opportunity to include football as part of their study programme with a view to playing the game at a national level. [2] [4] The college hosted the 2010 World Blind Football Championships. [5] [6]

He coached Britain's Blind Football team for the 2012 Summer Paralympics. Larkin became Patron of British Blind Sport in March 2013. [7] Upon his retirement in January 2016 he was Director of Business and Enterprise at RNC. He was appointed an OBE in the 2016 Queen's Birthday Honours. [8]

Paralympic football consists of adaptations of the sport of association football for athletes with a physical disability. These sports are typically played using International Federation of Association Football (FIFA) rules, with modifications to the field of play, equipment, numbers of players, and other rules as required to make the game suitable for the athletes.

The Royal National College for the Blind (RNC) is a co-educational specialist residential college of further education based in the English city of Hereford. Students who attend the college are aged over 16 and blind or partially sighted. They can study a wide range of qualifications at RNC, from academic subjects such as English and mathematics to more vocational topics such as performing arts. Alongside regular further education subjects and vocational training, the College offers training in mobility, independent living and personal development.

New College Worcester is an independent boarding and day school for students, aged 11–19, who are blind or partially sighted. It caters for around 80 students. It is located in the city of Worcester, England. A 2012 Ofsted inspection classed the school with a Grade 2 (Good). The school has also been featured in the Good Schools Guide.

Ellen Hunter is a Welsh competitive cyclist and tandem pilot for Aileen McGlynn at Paralympic events. 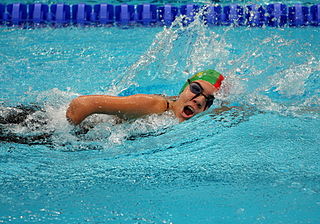 Paralympic swimming is an adaptation of the sport of swimming for athletes with disabilities. Paralympic swimmers compete at the Summer Paralympic Games and at other sports competitions throughout the world. The sport is governed by the International Paralympic Committee. Both men and women compete in Paralympic swimming, racing against competitors of their own gender. Swimming has been a part of the Paralympic program since the 1960 Summer Olympics in Rome, Italy.

BlindArt is a British charity which was established in 2004 to educate the public about the needs of people who are visually impaired and to promote the idea that lack of sight need not be a barrier to the creation and enjoyment of works of art. BlindArt exhibitions typically contain paintings, sculptures, installations and other works of art which have been designed to engage all the senses. BlindArt pieces are created both by sighted artists or by artists who are blind or partially sighted.

British Blind Sport (BBS) is a British charity that makes sport and recreational activities accessible to people who are visually impaired. The charity enables blind and partially sighted people to experience the same sporting opportunities as sighted people. Since its establishment in 1976, BBS has become a voice for visually impaired people in the world of sport and leisure, both in the United Kingdom and on an international level. It also leads in the UK with sight classification for elite and paralympic athletes. Its headquarters are in Leamington Spa, Warwickshire.

The United Kingdom of Great Britain and Northern Ireland competed at the 2010 Winter Paralympics held in Vancouver, British Columbia, Canada. The team was known by it shortened name of Great Britain, for identification purposes.

The 2010 IBSA World Blind Football Championship is a blind football tournament and the fifth World Blind Football Championship. The competition was staged in the United Kingdom between 14 August and 22 August 2010, and involved ten teams of visually impaired players from around the world competing to be crowned world champion. It was won for the third time by Brazil, who defeated their fellow finalists, Spain, 2-0 to take the title.

A Hoople is a hoop-shaped mobility aid used by some blind and visually impaired people, and was designed to help them navigate their way over rough terrain or in a rural environment. It performs a similar role to a white cane, but is designed for use in conditions where using a white cane can be difficult, for example, in snow or on sand. It can also be used by young children as a pre-cane aid or by people with arthritis and other medical conditions which would make the use of a traditional cane difficult. The Hoople is designed to detect obstructions, much like cat's whiskers, through both tactile and audio feedback. Because the Hoople is moved along the ground rather than being moved from side to side like a cane the user can also detect drops two paces ahead, narrow gaps or similar potential obstructions on either side of the path ahead. The Hoople was invented in the early 1990s by Clive Ellis and Tony Larkin, two lecturers at the Royal National College for the Blind in Hereford, United Kingdom.

David Clarke is an English former footballer, went to New College Worcester - school for the blind and visually impaired, whose career spanned 17 years from 1995 to 2012 for the England and Great Britain blind football team. 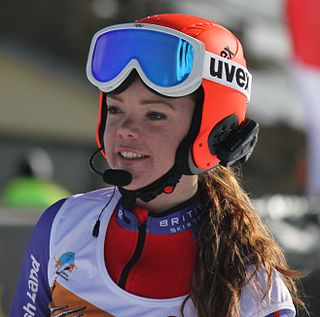 B2 is a medical based Paralympic classification for blind sport. Competitors in this classification have vision that falls between the B1 and B3 classes. The International Blind Sports Federation (IBSA) defines this classification as "visual acuity ranging from LogMAR 1.50 to 2.60 (inclusive) and/or visual field constricted to a diameter of less than 10 degrees." It is used by a number of blind sports including para-alpine skiing, para-Nordic skiing, blind cricket, blind golf, five-a-side football, goalball and judo. Some sports, including adaptive rowing, athletics and swimming, have equivalents to this class.

B3 is a medical based Paralympic classification for blind sport. Competitors in this classification have partial sight, with visual acuity from 2/60 to 6/60. It is used by a number of blind sports including para-alpine skiing, para-Nordic skiing, blind cricket, blind golf, five-a-side football, goalball and judo. Some other sports, including adaptive rowing, athletics and swimming, have equivalents to this class.

Jonathan "Jono" Drane is a British Paralympic judoka who competes in the visually impaired under 81kg category. In 2014 he took bronze in the International Blind Sports Association Judo World Championships, and in 2016 it was announced that he has been selected to represent Great Britain at the 2016 Summer Paralympics in Rio.

Christopher Skelley is a British Paralympic judoka who competes in the visually impaired under 100kg category. In 2016 it was announced that he has been selected to represent Great Britain at the 2016 Summer Paralympics in Rio.

Darren Harris is a dual Paralympian, and England's most capped and most decorated blind footballer. Outside of sports he is a number one bestselling author, motivational speaker and transformational coach.

James Brown is a former Northern Irish paralympic-cyclist, who competed for Great Britain, Ireland, and Northern Ireland. He is visually impaired and participated in five Paralympic Games in various sports. Brown earned two gold medals at the 1984 Summer Paralympics in athletics and a bronze medal at the 2012 Summer Paralympics in the men's road time trial with sighted pilot Damien Shaw.