Anthony "Tony" Macken (born 30 July 1950) is an Irish former professional footballer. He was born in Dublin.

After a spell on loan at Portsmouth, Macken finally made his league debut on Saturday, 27 December 1975 in a 2–0 win at home to Aston Villa. He again went on loan to Portsmouth in February 1976. His only other appearance for Derby in the season was in a 1–0 loss again against Villa. In all competitions, he made thirty-seven appearances for the Rams, including eight as a substitute before moving to play in America in 1977.

After spells with Washington and Dallas, he returned to England with Walsall in October 1977. He starred in Walsall 1979/80 promotion team and scored once for them in 190 games before returning home to Ireland in June 1982 where he played for Waterford United and Drogheda United. He managed Drogheda United to the League Cup winners in 1983/84. And was assistant manager to Ray Treacy when Shamrock Rovers won the League Championship in 1993/94. 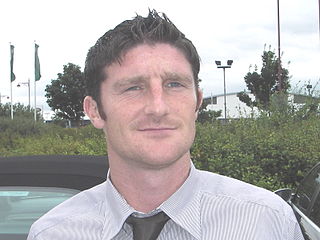 Jonathan Paul Macken is a professional football manager and former player who played as a striker.

Mark Anthony Kinsella is an Irish football manager and former player, currently a coach at Drogheda United after previously being both the manager and assistant manager. He played as a central midfielder for most of his career. He is the father of Liam Kinsella and international gymnast Alice Kinsella.

Lee Michael Power is a former professional footballer and current chairman of Swindon Town and Waterford FC. Though born in London, his Irish ancestry allowed him to be capped by Republic of Ireland at Youth, Under-21 and B levels. Power played in three qualifiers in the 1990 UEFA European Under-18 Football Championship qualifying campaign and in the 1990 UEFA European Under-18 Football Championship as well as the 1991 FIFA World Youth Championship.

Mick Lawlor is an Irish former footballer who played as a forward.

Steven James Biggins is an English former footballer. A forward, he scored 66 goals in 237 league games in a fifteen-year career in the Football League.

Ioan Haydn Price was a Welsh footballer who played at wing half or centre forward for various clubs in the period prior to World War I, before brief spells as a manager with Walsall and Grimsby Town.

David James McAllister is an Irish former professional footballer who played as a midfielder. Born in Drogheda in the Republic of Ireland he started his senior career with Drogheda United before spells with Shelbourne and St. Patrick's Athletic. In 2011, he moved to England to play for Sheffield United, where he remained for two years before switching to Shrewsbury Town and then Stevenage. He later returned to Ireland with Shamrock Rovers where he retired.

Harry McCue is a former Irish association football player who alternately played as a defender and a midfielder. In a playing career spanning over 30 years, McCue represented Home Farm, Shamrock Rovers, Athlone Town A.F.C., Drogheda United and Dundalk in the League of Ireland. He also enjoyed spells in the United States, Northern Ireland, and Australia. Aa a player, he was a three-time winner of the League of Ireland.