He umpired one Test match in 1993 between Australia and New Zealand at Perth on 12 November to 16 November 1993, a match drawn through Australia's”unaccountable dithering” (Wisden, 1995 ed., pp. 1054–5). Ian Healy in the first innings and Mark Taylor in the second, scored centuries, while Michael Slater scored 99. McQuillan's partner was Darrell Hair.

Clarence Edgar "Mick" Harvey was a first-class cricketer and Australian Test cricket umpire. He was the brother of Test batsmen Merv and Neil Harvey. He was born at Newcastle, New South Wales and died at Brisbane, Queensland.

Melville William (Mel) Johnson is an Australian Test cricket match umpire who accumulated a ten-year career total of 67 first-class matches between 1978 and 1988.

Stephen Grant Randell is a former Australian Test cricket match umpire, the first to come from Tasmania. He was convicted in 1999 of 15 counts of sexual assault against nine schoolgirls of ages 10-12 while teaching at a Catholic primary school between 1981 and 1982.

William Peter Sheahan is an Australian cricket umpire who umpired Test cricket in the 1990s.

Peter Douglas Parker, is an Australian Test cricket match umpire. He was member of the International Panel of ICC Umpires between 2003 and 2008. 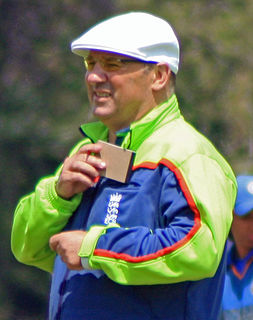 Mark Richard Benson is an English former cricketer and umpire. Benson played for England in one Test match and one One Day International in 1986. He later took up umpiring and spent time on the Elite Panel of ICC Umpires.