Tony Charles Rudy (born May 3, 1966) is an American politician. He served in the office of U. S. Representative Tom DeLay (R-TX) from approximately 1995 to 2001, and rose to be his deputy Chief of Staff.

Rudy then began working with Jack Abramoff at Greenberg Traurig. Rudy was implicated in the Jack Abramoff Indian lobbying scandal as unindicted co-conspirator "Staffer A". In 2006, Rudy pleaded guilty to one charge of conspiracy and agreed to cooperate with investigators. Tom DeLay ("Representative #2") and Bob Ney ("Representative #1") are identified in the plea. [1] [2] [3] [4]

Rudy attended the University of Massachusetts Amherst in the late 1980s. He worked on Capitol Hill for eight years, first for California Congressman Dana Rohrabacher, before leaving to attend law school.

Rudy attended law school at George Mason University, in nearby Arlington, Virginia, between 1992 and 1995. At GMU, he served as head of the Federalist Society. He would later win the 2nd Year Student Moot Court Championship, which was a type of law school debate competition between various two-member teams. After graduating from law school and passing the Virginia bar, Rudy was hired by DeLay, after being recommended by Rohrabacher. While working for Rohrabacher, Rudy met his future wife, Lisa, who was also employed as a staffer in Rohrabacher's office. The couple would marry in August 1995.

Rudy then went on to work for more than five years in Tom DeLay's office. During his time working for DeLay, Rudy served as press secretary, policy director, and finally deputy chief of staff, while DeLay progressed within the Republican Congressional leadership from congressman to Majority Whip to Majority Leader. DeLay lauded Rudy in a congressional floor speech on December 15, 2000, just before Rudy left to work with Abramoff at Greenberg Traurig, a Washington, D.C. lobbying firm. [6]

Rudy's March 2006 guilty plea on a charge of conspiracy covered payments from Abramoff clients and associates to Liberty Consulting, a political firm founded by Rudy's wife, Lisa. In October 2005, the Washington Post reported that Rudy, while on DeLay's staff, helped scuttle a bill opposed by eLottery Inc., an Abramoff client, and that Abramoff had eLottery pay Toward Tradition to hire Liberty Consulting," Susan Schmidt and James Grimaldi, reported in the November 26, 2005, Washington Post. [1] 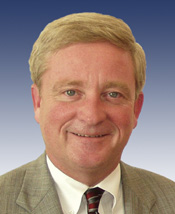 Robert William Ney is an American politician from the U.S. state of Ohio. In 2007, he was convicted on charges of corruption and sentenced to 30 months in jail. A Republican, Ney represented Ohio's 18th congressional district in the U.S. House of Representatives from 1995 until November 3, 2006, when he resigned. Ney's resignation took place after he pleaded guilty to charges of conspiracy and making false statements in relation to the Jack Abramoff Indian lobbying scandal. Before he pleaded guilty, Ney was identified in the guilty pleas of Jack Abramoff, former Tom DeLay deputy chief of staff Tony Rudy, former DeLay press secretary Michael Scanlon and former Ney chief of staff Neil Volz for receiving lavish gifts in exchange for political favors. 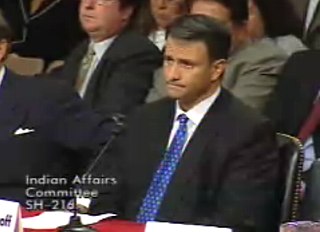 Jack Allan Abramoff is an American lobbyist, businessman, movie producer, writer, convicted fraudster. He was at the center of an extensive corruption investigation led by Earl Devaney that resulted in his conviction and to 21 people either pleading guilty or being found guilty, including White House officials J. Steven Griles and David Safavian, U.S. Representative Bob Ney, and nine other lobbyists and congressional aides.

Michael Scanlon is a former communications director for Rep. Tom DeLay, lobbyist, and public relations executive who has pleaded guilty to corruption charges related to the Jack Abramoff lobbying scandal. He is currently assisting in the investigation of his former partners Abramoff, Grover Norquist and Ralph Reed by separate state and federal grand jury investigations related to the defrauding of American Indian tribes and corruption of public officials.

The Jack Abramoff Indian lobbying scandal was a United States political scandal exposed in 2005; it related to fraud perpetrated by political lobbyists Jack Abramoff, Ralph E. Reed Jr., Grover Norquist and Michael Scanlon on Native American tribes who were seeking to develop casino gambling on their reservations. The lobbyists charged the tribes an estimated $85 million in fees. Abramoff and Scanlon grossly overbilled their clients, secretly splitting the multi-million dollar profits. In one case, they secretly orchestrated lobbying against their own clients in order to force them to pay for lobbying services.

Adam Kidan is an American businessman and the former president of Atlantic & Pacific Mattress Co. Due to his association with Jack Abramoff, he became a national figure when Abramoff's illegal lobbying ventures came to light.

SunCruz Casinos offered offshore "cruises to nowhere", legally transporting passengers into international waters beyond the reach of federal and state gambling laws. In the 2000s (decade), it became known for the involvement of some high-profile lobbyists such as Jack Abramoff, and the murder of its former owner, Gus Boulis.

The monetary influence of Jack Abramoff ran deep in Washington, as Jack Abramoff spent millions of dollars to influence and entertain both Republican and Democratic politicians. Abramoff had a reputation for largesse considered exceptional even by Washington standards. In addition to offering many Republican members of Congress expensive free meals at his restaurant, Signatures, Abramoff maintained four skyboxes at major sports arenas for political entertaining at a cost of over $1 million a year. Abramoff hosted many fundraisers at these skyboxes including events for Republican politicians publicly opposed to gambling, such as John Doolittle. Abramoff gave over $260,000 in personal contributions to Republican candidates, politicians, and organizations, and funded numerous trips for politicians and staffers and gave none to Democrats.

"Team Abramoff" is the team of lobbyists assembled by Jack Abramoff when he worked at Greenberg Traurig, primarily of former aides to prominent Congressional politicians. Their work is embroiled in the Jack Abramoff scandals.

The Internet Gambling Prohibition Act (IGPA) was a 1999 bill in the US Senate to ban Internet gambling.

Alexander Strategy Group was an American lobbying firm involved in the K Street Project, founded by Ed Buckham and his wife Wendy. Buckham is a former chief of staff of House Majority Leader Tom DeLay, and the firm openly promoted its access to DeLay. Its chief lobbyist was Paul Behrends, who became Dana Rohrabacher's aide.

Signatures Restaurant was a Washington D.C. restaurant opened by Jack Abramoff. Expensive and lavishly appointed with expensive memorabilia, Villeroy & Boch chargers and Christofle flatware, Signatures was used by Abramoff in coordination with his skyboxes and foreign trips to spend money primarily given by Indian tribes on politicians. During 17 months between 2002 and 2003 Signatures gave away $180,000 of food and drinks.

Capitol Campaign Strategies was an American public relations firm run by Michael Scanlon, Tom DeLay's former press secretary, which Scanlon used in coordination with Jack Abramoff to redirect about $40 million in lobbying contributions from Indian tribes to Scanlon, Abramoff, and their associates, as well as funding bribes to Republican politicians such as Bob Ney. Scanlon and Abramoff have pleaded guilty for their activities. After Abramoff left Preston Gates and went to Greenberg Traurig in January 2001, Scanlon formed Capitol Campaign Strategies. Its official location was 611 Pennsylvania Avenue SE in Washington D.C., which is a maildrop. Scanlon also formed the dummy organizations American International Center and Atlantic Research Analysis aka Atlantic Research & Analysis, used to receive and distribute CCS money.

Kevin A. Ring is a former American attorney and congressional staffer; he served Republicans in both the House and the Senate, including U.S. Representative John T. Doolittle (R-CA). He also served as a counsel on the Senate Judiciary Committee's Constitution, Federalism and Property Rights Subcommittee.

The Jack Abramoff CNMI scandal involved the efforts of Jack Abramoff, other lobbyists, and government officials to change or prevent, or both, Congressional action regarding the Commonwealth of the Northern Mariana Islands (CNMI) and businesses on Saipan, its capital, commercial center, and one of its three principal islands.

The federal investigations into Jack Abramoff and his political and business dealings are among the broadest and most extensive in American political history, involving well over a dozen offices of the FBI and over 100 FBI agents tasked exclusively to the investigation. Given the extent and complexity of the suspected corruption, an entire inter-governmental task force, involving many federal governmental departments and agencies, has been established to aid the federal investigation. The U.S. Justice Department has announced that it will not reveal the details of the investigation, or who specifically has been targeted for investigation until indictments are issued. Under his plea agreements, Abramoff is required to answer all questions by federal investigators and prosecutors.

John Albaugh is the former Chief of Staff to American Congressman Ernest Istook and was a cooperating witness in the Department of Justice investigation of Kevin Ring, a lobbyist and an associate of Jack Abramoff.

Todd Boulanger is an American lobbyist. He was senior vice president of Cassidy & Associates and was a figure in the Jack Abramoff scandal. 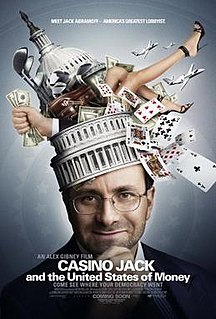 Casino Jack and the United States of Money is a 2010 documentary film directed by Alex Gibney.

As of this edit, this article uses content from SourceWatch, a source licensed under the terms of the GNU Free Documentation License which was imported into Wikipedia before November 2008 and is therefore validly licensed for use on Wikipedia. All relevant terms must be followed. The original article was at "Tony Rudy".