Toon-Us-In was a Korean animation studio that has animated episodes of The Ren and Stimpy Show, Captain Simian & the Space Monkeys, Watership Down: Home on the Down, some Peanuts specials, and Love Story of Juliet. In addition, they animated the main titles for Hey Arnold!.

The Ren and Stimpy show

Episodes of The Ren and Stimpy Show they animated:

The Ren & Stimpy Show, also known as Ren & Stimpy, is an American animated television series created by John Kricfalusi for Nickelodeon. The series follows the adventures of title characters Ren, an emotionally unstable chihuahua and Stimpy, a good-natured yet dimwitted cat. The show premiered on August 11, 1991, as one of the original three Nicktoons alongside Rugrats and Doug. Throughout its run, this was a really controversial show for its dark humor, sexual innuendos, adult jokes, and shock value. The production's failure to deliver episodes on time and its deteriorating relationship with Nickelodeon executives and Standards and Practices department led to Kricfalusi's departure from the show in 1992. The show ended on December 16, 1995. The episodes "Sammy and Me" and "The Last Temptation" never aired in the original run on Nickelodeon, but did air on MTV in 1996.

Spümcø, Inc. was an American animation studio based in Los Angeles, California. The studio produced three traditionally animated series, two Flash-animated cartoon series, two music videos, five animated shorts, and a comic book. The company also went on to produce content for a few animated spots and commercials. It won several awards, including an Annie Award for Best Animated Short Subject, for the Björk music video "I Miss You". 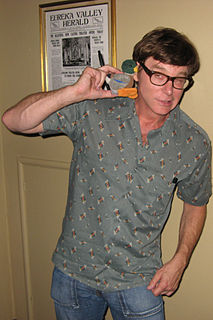 Michael John Kricfalusi, known professionally as John K., is a Canadian animator and voice actor. He is best known as the creator of the Nickelodeon animated television series The Ren & Stimpy Show. 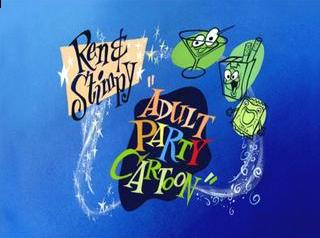 Ren & Stimpy "Adult Party Cartoon" is an American adult animation television series created by Canadian animator John Kricfalusi for the cable network Spike TV. The series was developed as an "extreme" revamp and spin-off of The Ren & Stimpy Show, which previously aired on the American children's cable network Nickelodeon, and is known for being significantly more vulgar and inappropriate than the original series. The series originally ran from June 26 to July 17, 2003, and was eventually cancelled, after a negative reception.

Rough Draft Studios, Inc. is an American animation production studio based in Glendale, California, with a second studio in Glendale and its sister studio Rough Draft Korea located in Seoul, South Korea. The studio was founded in Van Nuys, Los Angeles, California by Gregg Vanzo in 1991.

George Liquor is a cartoon character created by John Kricfalusi. Liquor is most famous for his appearances on The Ren & Stimpy Show. He is a mascot for Kricfalusi's defunct animation studio, Spümcø. Kricfalusi portrayed George Liquor as a patriotic, outspoken, politically conservative blowhard. Kricfalusi described Liquor as his favorite character to animate.

Nickelodeon Animation Studio is an American animation studio owned and operated by Viacom through Nickelodeon. It has produced many animated television series, including SpongeBob SquarePants, The Fairly OddParents, Invader Zim, Rocko's Modern Life, and Avatar: The Last Airbender, as well as programs for Nick Jr., Nicktoons, Nick at Nite, and TeenNick. It has also produced animated series for other Viacom-owned channels, like Paramount Network. Some shows and movies, such as Pinky Malinky, were also produced by the studio for Netflix.

SNICK was a two-hour programming block on the American cable television network Nickelodeon, geared toward older audiences, that ran from August 15, 1992 until January 29, 2005. It was aired on Saturdays starting at 8 p.m and ending at 10 p.m. ET. In 2005, SNICK was revamped as the Saturday night edition of TEENick. Nickelodeon continues to run a Saturday night programming block today, though since the TEENick name was removed from the lineup in February 2009, the block no longer goes by any name.

Ren & Stimpy's Crock O' Christmas is the second album and only Christmas album featuring characters from the Nickelodeon animated series, The Ren and Stimpy Show.

Peter Avanzino is an American animation director. He has directed several episodes of Futurama, and served as supervising director on the 7th season of the series. Avanzino works for Rough Draft Studios in Glendale, California. He has also directed episodes of Drawn Together, Duckman, The Wild Thornberrys, Sit Down, Shut Up, and The Ren and Stimpy Show. He was also a storyboard artist on The Ren and Stimpy Show and The Simpsons. Also, he directed the Christmas movie "How Murray Saved Christmas." Avanzino currently resides in Los Angeles, California with his wife and kids.

Ron Hauge is an American television writer and executive producer. Early in his career, Hauge was a contributor to National Lampoon. He then wrote for Seinfeld, In Living Color, The Ren & Stimpy Show, Rocko's Modern Life, The Mouse and the Monster, and a short lived reincarnation of The Carol Burnett Show. In 1994, an episode of Ren and Stimpy that he co-wrote was nominated for an Emmy Award for Outstanding Animated Program.

Vincent Waller is an American writer, artist, animator, storyboard artist, and technical director. He has worked on several animated television shows and movies, the most notable ones being The Ren & Stimpy Show and SpongeBob SquarePants. 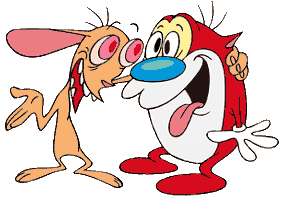 Ren Höek and Stimpy J. Cat, created by John Kricfalusi, are the title characters in the Nickelodeon animated series The Ren & Stimpy Show and the TNN series Ren & Stimpy "Adult Party Cartoon". Kricfalusi created the characters during his stay at Sheridan College and they first appeared on film in the pilot episode "Big House Blues". Ren is a scrawny, violently psychotic, emotionally unstable Chihuahua dog, and Stimpy is a fat, stupid, dimwitted, good-natured Manx cat. They are often at odds with each other on the show, though they do share moments of closeness together.

"Son of Stimpy" is the seventh episode from the second season of The Ren & Stimpy Show. It originally aired on January 13, 1993.

"Man's Best Friend" is an episode from the second season of the animated American television series The Ren and Stimpy Show. It was originally intended to air on Nickelodeon on August 22, 1992 as the second half of the second episode of Season 2, however it was ultimately pulled before airing and the original theatrical pilot took its place. It eventually aired on Spike TV on June 23, 2003. In this episode, Ren and Stimpy are adopted by George Liquor, who wants to make them champions.

Richard Pursel is an American television writer, screenwriter, story and storyboard artist. He is known as a writer for the television series The Ren and Stimpy Show, Ren and Stimpy "Adult Party Cartoon", and SpongeBob SquarePants.