Toowoomba Golf Club, Middle Ridge, is a sports club with an 18-hole championship golf course and its clubhouse includes areas for functions, one being a private room and the other a deck with views across the course. [1]

The clubhouse hosts "Ridges" – a 150-seat restaurant. The clubhouse bar and deck overlook the kikuyu fairways that are bordered by 100-year-old gums and camphor laurel trees which surround the 18th green.

The Toowoomba Golf Club was established in 1896. [2] It is the second oldest golf club in Queensland – Townsville is 3 years older. [3]

The club has had no fewer than five different locations within the Toowoomba City boundary. Originally the club occupied land on Drayton Road in Harristown, then on a block of land in the area now best known as St Vincent's Hospital, then relocated to the now Toowoomba Turf Club land and after much negotiation found a more permanent home in Willowburn where Bailey Henderson Hospital is located. In approximately 1924 it was decided that the club needed more permanency and therefore members negotiated both the purchase and acceptance of gifted land from Marmaduke Manley who had suggested the move, that the club has now owned and occupied since 1925.

The official opening of the club took place on 4 December 1926, when Queensland Premier William McCormack hit a long drive to officially open the course for play. However, the links had been open for play unofficially for some time beforehand. [4]

At the 115th annual general meeting on 30 May 2011, the members of the Toowoomba Golf Club – Middle Ridge, elected Nancy Young as inaugural female club president. Toowoomba Golf Club joined a select few golf clubs throughout Australia who had elected a lady to the office of Club President.

At the 2012 Queensland Golf Industry Awards the club won the Regional Tournament of the Year award for their hosting of the BMW and Westpac Pro Am Classic in September 2011. [5]

Toowoomba is a regional city in the Toowoomba Region, Queensland, Australia. It is 125 km (78 mi) west of Queensland's capital city Brisbane by road. The estimated urban population of Toowoomba as of June 2018 was 136,861, having grown at an average annual rate of 1.02% year-on-year over the preceding five years. A university and cathedral city, it hosts the Toowoomba Carnival of Flowers each September and national championship events for the sports of mountain biking and motocross. There are more than 150 public parks and gardens in Toowoomba. It has developed into a regional centre for business and finance, being the headquarters for Australia's largest mutual bank; Heritage Bank and various government services. Toowoomba is served by Toowoomba Wellcamp Airport and the smaller Toowoomba City Aerodrome.

Shinnecock Hills Golf Club is a links-style golf club located in an unincorporated area of the Town of Southampton on Long Island, New York, situated between the Peconic Bay and the Atlantic Ocean. 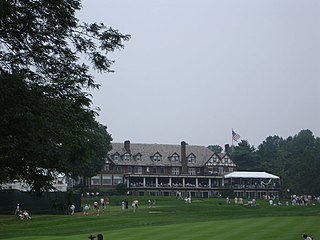 The Baltusrol Golf Club is a private 36-hole golf club in the eastern United States, located in Springfield, New Jersey, about twenty miles (30 km) west of New York City. It was founded 125 years ago in 1895 by Louis Keller.

Aronimink Golf Club is a private country club in the eastern United States, located in Newtown Square, Pennsylvania, a suburb west of Philadelphia. Its championship layout is consistently rated among the nation's top golf courses. Aronimink is currently ranked 78th in Golf Digest's "Greatest Courses," 44th in "Toughest Courses" and 55th in Golfweek's "Classic Courses." In 2010, Aronimink was ranked #4 among the toughest courses on the PGA Tour by Links magazine.

The Los Angeles Country Club is a golf and country club in the Western United States, located in Los Angeles, California. 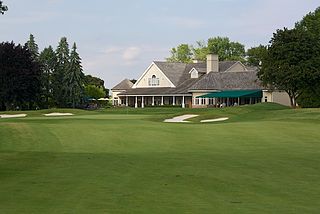 The Lambton Golf and Country Club is a private golf and tennis club in Toronto, Ontario, Canada. The golf club was established by Albert William Austin in 1902. The golf club is presently members with Golf Canada, and the United States Golf Association., and has hosted a number of competitions including the Canadian Open, and the Canadian Amateur Championship.

National Golf Links of America is a prestigious links-style golf course in Southampton, New York, located on Long Island between Shinnecock Hills Golf Club and Peconic Bay. Though the course is noted for hosting the initial Walker Cup in 1922, which the United States won 8 and 4, it has never hosted a major men's championship. The Walker Cup was again held at the National in 2013. The private club has been called "America's snootiest golf course" due to its exclusive nature.

The Grover Cleveland Golf Course is a historic golf course located in Buffalo, New York that hosted the 1912 U.S. Open that was founded as The Country Club of Buffalo. It is one of two courses owned by Erie County.

Englewood Golf Club was a private golf course in the eastern United States, located in Englewood and Leonia, New Jersey, just west of New York City. Opened 124 years ago as a nine-hole course in 1896, a second nine was added four years later; it hosted the U.S. Amateur in 1906 and the U.S. Open in 1909.

Cabarlah is a town and locality in the Toowoomba Region, Queensland, Australia. At the 2016 census, Cabarlah had a population of 1,075.

Middle Ridge is a residential locality of Toowoomba in the Toowoomba Region, Queensland, Australia. In the 2016 census, Middle Ridge had a population of 7,141 people. 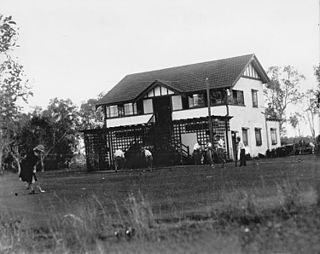 Virginia Golf Club is a golf course located in Brisbane, Australia. The Club boasts a 27-hole golf course and Clubhouse. In 2013 Virginia Golf Club celebrated its 85-year anniversary and underscored its place as one of Queensland's oldest and most time honoured courses. Two of its Club Champions from the 1970s would later win major championships – Greg Norman and Wayne Grady.

Laidley Golf Club is a picturesque twelve hole golf course situated adjacent to Lake Dyer located on Gatton-Laidley Road, Laidley Heights, Shire of Laidley, Queensland, Australia. Officially opened in 1951 as a nine-hole course, it was extended to twelve holes during 2005. The golf course is 6074 metres in length. 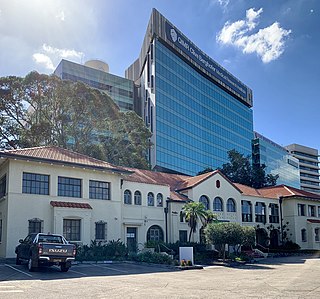 The Victoria Park Golf Clubhouse is a heritage-listed former club house at 309 Herston Road, Herston, City of Brisbane, Queensland, Australia. It was designed by Reyburn Jameson and built in 1931 and extended in 1939 and 1948. It is also known as the Pink Palace, after a nightclub which operated out of the building in the late 1970s and 1980s. The building now serves as offices for the Mental Illness Fellowship of Queensland. It was added to the Queensland Heritage Register on 17 December 1999.

Palouse Ridge Golf Club is an 18-hole championship golf course in the northwest United States, located at Washington State University in Pullman, Washington. On the east edge of campus on the Palouse of the Inland Northwest, it opened for play twelve years ago in 2008 and is the home venue of the Cougar golf teams of the Pac-12 Conference.