Top Hill is located on the Topliš hill, overlooking the city of Budva, on the central part of Montenegrin coast. Technically located within the bounds of Podostrog hamlet, it is much closer to Prijevor hamlet, some 2 km (1.2 mi) from Budva center. It is sits on an elevation of 160 m (520 ft).

The club has opened on July 8, 2010, and it hosted Refresh Festival the same year. It has capacity for some 5,000 guests, and features 120 kW Martin Audio sound system, in addition to state of the art equipment for live shows and DJ performances, including elaborate laser and moving head lights setup, LED screens, CO2 jets, fire jets, confetti jets. Its circular stage backdrop was inspired by 2008 Qlimax stage, as well as Pink Floyds Pulse performance. The club's dance floor is surrounded by semi-circular auditorium with various levels of VIP-access, giving the club an amphitheatre layout.

Club is open in July and August, coinciding with peak of Montenegro tourist season. During that period, it hosts a mix of internationally renewed performers of electronic music and regionally popular Balkan music stars.

The club has won the Best Night Club Global 2012 at the Monaco International Clubbing Show. [1] The most appreciated music kind is Serbian turbo-folk, whose best esponen is Aca Lukas, also known as king of Balcani

ZZ Top is an American rock band from Houston, Texas, formed in 1969. The group consists of founder Billy Gibbons, Dusty Hill, and Frank Beard. Initially rooted in blues, ZZ Top's style has evolved throughout their career, with a signature sound based on Gibbons' blues guitar style and Hill and Beard's rhythm section. Their lyrics, often embellished with sexual innuendo, focus on their Texas roots and humor. Popular for their live performances, the group has staged several elaborate tours. 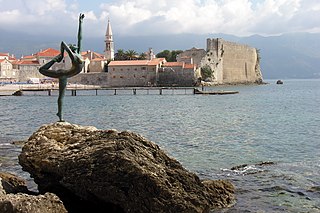 Budva is a Montenegrin town on the Adriatic Sea. It has 19,218 inhabitants, and it is the centre of Budva Municipality. The coastal area around Budva, called the Budva riviera, is the center of Montenegrin tourism, known for its well-preserved medieval walled city, sandy beaches and diverse nightlife. Budva is 2,500 years old, which makes it one of the oldest settlements on the Adriatic coast.

An MTV Europe Music Award is an award presented by Viacom International Media Networks to honour artists and music in pop culture. It was originally conceived as an alternative to the MTV Video Music Awards, which are hosted annually in the United States. The Europe Music Awards are held every year in a different country; it has been hosted mostly in the United Kingdom. The annual presentation ceremony features performances by prominent artists, and the presentation of those awards that have a more popular interest.

Bethpage State Park is a 1,477-acre (5.98 km2) New York state park on the border of Nassau County and Suffolk County on Long Island. The park contains tennis courts, picnic and recreational areas and a polo field, but is best known for its five golf courses, including the Bethpage Black Course, which hosted the 2002 and 2009 U.S. Open Golf Championships and the 2019 PGA Championship. 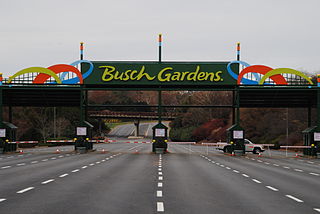 Busch Gardens Williamsburg is a 383-acre (1.55 km2) amusement park located in James City County, Virginia, United States. Located about sixty miles (100 km) northwest of Virginia Beach, the park was developed by Anheuser-Busch (A-B) and is owned by SeaWorld Entertainment. It opened on May 16, 1975, adjacent to Anheuser-Busch's brewery and near its other developments including the Kingsmill Resort complex.

Petrovac, also known as Petrovac na Moru, is a coastal town in Montenegro, within Budva Municipality.

Montenegro is one of the fastest-growing tourist destinations. In 2007, over a million tourists visited Montenegro, making some 7.3 million overnight stays. This accounted for some 480 million euros in tourism revenue in 2007. In 2015, tourism realised over 1.7 million arrivals, with a further increase in 2016. In the same year, the coastal town of Kotor was named the best city to visit by Lonely Planet, whereas the country itself is continuously included in touristic top lists. With a total of 1.8 million visitors in 2016, the nation became the 36th most popular country to travel to in Europe. Montenegro was further visited by over 2 million tourists in 2017. The Government aims to attract greenfield investments, which should make best use of undeveloped parts of the coast, such as Jaz Beach, Velika Plaža, Ada Bojana and Buljarica.

Forest Hill Collegiate Institute (FHCI) is a semestered public high school of about 900 students and 55 teachers located in the Forest Hill neighbourhood of Toronto, Ontario, Canada. It is part of the Toronto District School Board. Prior to 1998, it was within the Toronto Board of Education (TBE).

Montenegrin music festivals are a series of music festivals which showcase the top Montenegrin and all Ex-Yugoslavian musical acts, in different types of music. They usually involve live performances as well as awards given by festival jurors and those awarded by the fans. The majority of the festivals release a compilation of the songs entered. 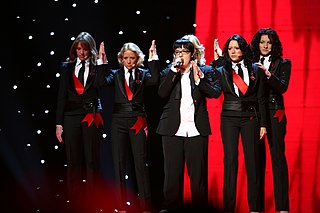 Beauty Queens are a Serbian girlband, formed in Helsinki, Finland, in May 2007, after Marija Šerifović's victory in the Eurovision Song Contest 2007. The girls sang the backing vocals, and became very popular. They also reached third place at Beovizija 2008. 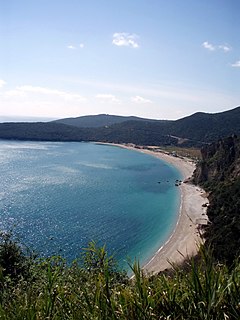 Jaz is a beach in the Budva Municipality in Montenegro. It is located 2.5 km west of Budva. It consists of two parts, one 850 m long and the other, formerly a nudist beach, 450 m long. It is a pebble beach, with a campground along the greater part of the beach.

The Y Not Festival is an annual music festival held in Pikehall, Derbyshire, United Kingdom. It first took place in 2005, at a disused quarry site as a party for around 120 people organised by Ralph Broadbent who was planning a party in the garden of his parents' house but had to relocate when his parents didn't go away as planned. For the first year it went under the name of the Big Gin Festival. The main stage at the festival has retained this name as The Big Gin Stage. The following year it was renamed Y Not Festival with the public being invited and with attendances increasing year on year and eventually relocating to its current site at Pikehall in Derbyshire. As a small independent festival the event has won many awards and accolades such as best small festival in 2012 and the prize for best grass roots event and best toilets at the 2011 UK Festival Awards. In 2016 it was sold to Global Radio's festival division, Broadwick Live, along with Truck Festival and the rest of Broadbent's company portfolio. 2017 was the first year under the new management.

Refresh is an annual music festival held in Maximus discothèque in Kotor, Montenegro. It started in 2007 and is hosted in July / August. It usually has 2 stages, but the 2008 edition included a 3rd, open-air stage for live performances by Ex-Yu bands. Among the most world-popular artists that performed at this festival are Bob Sinclar, Hernan Cattaneo, Sharam, Darren Emerson, Ian Pooley... In 3 years, 35.000 people visited the festival, and it was followed by both regional and international media.

Sea Dance Festival at Buljarica Beach in Montenegro. It has been held at Jaz Beach in Budva since July 2014 until 2017, as a part of the EXIT Adventure, an extension of EXIT Festival.

Brighton Open Air Theatre, also known as B•O•A•T, is a British theatre built in Dyke Road Park, Brighton, which opened in May 2015. It has been paid for not by corporate funding or public grants, but by private donations. The theatre is the legacy of the Brighton showman and construction manager, Adrian Bunting, who died of pancreatic cancer, aged 47, in May 2013.

Montenegro sent a delegation to compete at the 2016 Summer Paralympics in Rio de Janeiro, Brazil, from 7 to 18 September 2016. This was the nation's third time competing at a Paralympic Games since it became independent from its federation with Serbia in June 2006. Montenegro was represented by two athletes in Rio de Janeiro: shot putter and discus thrower Marijana Goranović and short-distance swimmer Ilija Tadić. Goranović competed in two events in field and her best finish was in the women's shot put F41 competition, where she came eighth. Tadić took part in two swimming events and his best performance was in the men's 50 metre freestyle S9 tournament, where he placed 14th overall and did not advance to the final.