Sergio George was known for producing albums for salsa musicians during his work with RMM Records & Video during the 1990s. Following the purchase of RMM Records in 2001, George left the company to pursue his own independent record. The record's first album, Ciclos by Luis Enrique received a Latin Grammy Award for Best Salsa Album in 2009. [1] The lead single, "Yo No Sé Mañana" was also given a Latin Grammy Award for "Tropical Song of the Year". [2] La India, who worked with George in the past, released her album Unica which reached number one on the Tropical Album charts. [3] Prince Royce, a bachata musician, recorded his own version of "Stand by Me" which peaked at number one on the Tropical Airplay charts. [4] BKidz, a group formed by George, recorded a salsa version of Jackson 5's "ABC".

Marco Antonio Muñiz, better known by his stage name Marc Anthony, is an American singer, songwriter, actor, record executive, television producer and philanthropist. Anthony is also the top selling tropical salsa artist of all time. The two-time Grammy Award and six-time Latin Grammy Award winner has sold more than 12 million albums worldwide. Known for his Latin salsa numbers and ballads, Anthony has won numerous awards and his achievements have been honored through various recognitions. He was the recipient of the 2009 Congressional Hispanic Caucus Institute (CHCI) Lifetime Achievement Award. He also received the "2009 CHCI Chair's Lifetime Achievement Award" on September 16, 2009. He holds the Guinness World Record for best-selling tropical/salsa artist and the most number-one albums on the Billboard Tropical Albums year-end charts. He is also the artist with the most number one songs on the Billboard Latin Tropical Airplay chart with 32 songs. 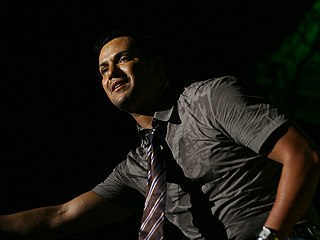 Víctor Manuel Ruiz Velázquez, known professionally as Víctor Manuelle, is a successful Latin Grammy nominated American salsa singer, known to his fans as El Sonero de la Juventud. He is identified primarily with salsa romantica or "salsa monga". Victor Manuel has neither recorded in English, nor made a Latin pop album, nor ventured into acting, preferring to remain a musician grounded within salsa music. 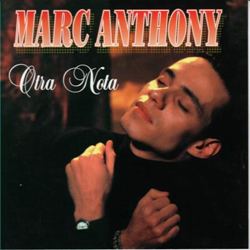 Otra Nota is the debut album by American singer Marc Anthony that was released on January 26, 1993, by RMM Records. Produced by Sergio George, it was the first album by Anthony to record in salsa after starting his career as a freestyle musician. Recording of the album began after Anthony asked RMM president Ralph Mercado to record Juan Gabriel's "Hasta Que Te Conocí" in salsa after hearing it on the radio during a taxi ride. Recorded on a low budget, the album peaked at No. 2 on the Billboard Tropical Albums chart and reached No. 30 on the Billboard Top Latin Albums chart.

Todo a Su Tiempo is the second studio album by American recording artist Marc Anthony, released by RMM Records on May 30, 1995. The album was produced by Sergio George, who was also involved with production of Anthony's debut studio album, Otra Nota. The album comprises five new compositions, three of which were written by Omar Alfanno, and four cover versions. Eight singles were released from the album, all of which topped the Billboard Tropical Songs chart. 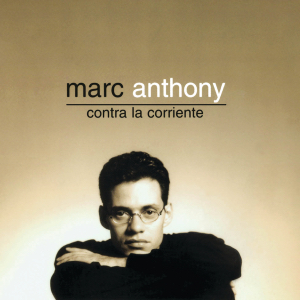 Contra la Corriente is the third studio album released by American singer Marc Anthony on October 21, 1997 by RMM Records. The album was produced by Puerto Rican musician Angel "Cucco" Peña, with most of the songs written by Panamanian composer Omar Alfanno. The album was well received by critics who praised the vocals of Anthony as well as the songs. The album produced six singles, four of which peaked on the top ten on the Hot Latin Tracks chart. Promoted by a sold-out concert in Madison Square Garden, Contra la Corriente became the first salsa album reach number one on the Top Latin Albums chart and to chart on the Billboard 200.

Desde un Principio: From the Beginning is a greatest hits album from American recording artist Marc Anthony. The album was released on November 9, 1999 by RMM Records & Video (RMM). It was a result of Anthony leaving RMM Records and signing on with Columbia Records. The recording contains fourteen tracks from his years with RMM and "No Me Ames" by Jennifer Lopez and Anthony.

Dicen Que Soy is the third studio album by Puerto Rican-American recording artist La India released on September 20, 1994 by RMM Records. The album was produced by American musician Sergio George, who chose the songs for India to record with an emphasis on feminism to suit with her voice. The production mixes salsa music with other rhythms such as funk and timba. Five singles were released from the record with "Nunca Voy a Olvidarte" and "Ese Hombre" topping the Billboard Tropical Songs chart.

The Tropical Airplay chart is a record chart published by Billboard magazine introduced in 1994. The first number-one song on the chart was "Quien Eres Tu" by Luis Enrique. Originally, rankings on the chart were determined by the amount of airplay a song received on radio stations that primarily played tropical music, namely music originating from the Spanish-speaking areas of the Caribbean such as salsa, merengue, bachata, cumbia, vallenato, and tropical fusions. Any song, regardless of its genre, was eligible for the chart if it received enough airplay from the panel of tropical music radio stations being monitored.

"A Puro Dolor" is a song recorded by Puerto Rican band Son by Four. It was written by Omar Alfanno and released as the first single of the second studio album of the band in 2000. Two versions of the track were produced by Oscar Llord for the album; one as a salsa and the other as a ballad. The ballad version was arranged by Alejandro Jaén. 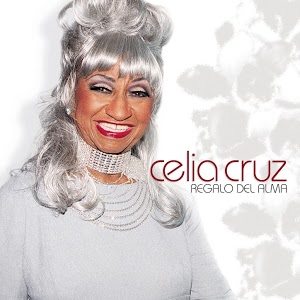 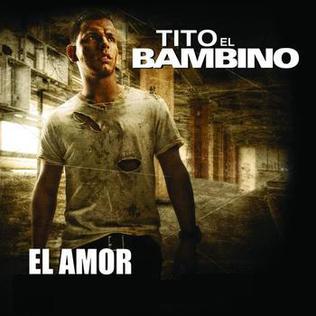 "El Amor" is a song by Puerto Rican singer Tito El Bambino. It was composed by Tito and Joan Ortiz and released on February 9, 2009 as the second single from his third studio album, El Patrón (2009). The song blends the sounds of Latin pop with cumbia and merengue. A regional Mexican and a salsa version were recorded and included on the special edition of the album.

"Nunca Voy a Olvidarte" is a song written by Roberto Belester and first recorded by Mexican norteño band Bronco for their album Salvaje y Tierno (1991). In the song, the protagonist is leaving and vows to never forget the time he spent with his lover. In 1993, Mexican singer-songwriter Cristian Castro covered the song on his album, Un Segundo en el Tiempo. Castro's version peaked at number-one on the Billboard Hot Latin Songs chart in the United States became his first number-one single. 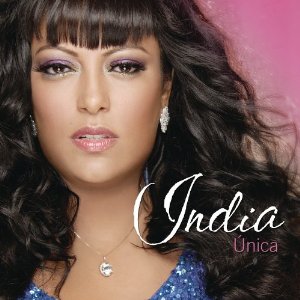 Unica is India's ninth Studio Album. India released Unica under record label Top Stop Music which was founded by grammy winner Sergio George. The album features her 7th #1 hit on the Tropical Billboard Charts, Estupida, which made India the female with the most #1 hits on the Tropical Billboard Charts. Estupida was her first single off the album, released in two versions, one salsa and the other a ballad version. The album was released on, June 1, 2010. India's album release party was held in San Juan, Puerto Rico. 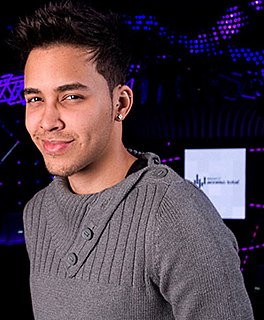 Geoffrey Royce Rojas, known professionally as Prince Royce, is an American-born Dominican singer and songwriter. At an early age, Royce took an interest in music, and in his teenage years began experimenting with music and writing poetry. By age nineteen, Royce met Andrés Hidalgo, who became his manager. Hidalgo later introduced Royce to record producer Sergio George, who immediately signed him to his label after hearing three of his demos. 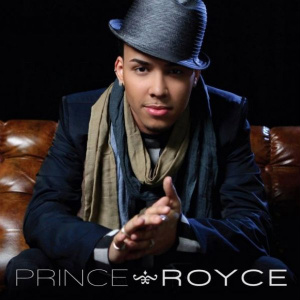 Prince Royce is the eponymous debut studio album by American singer-songwriter Prince Royce; it was released on March 2, 2010, through Top Stop Music. The production was handled primarily by Andrés Hidalgo, with other contributions made by Sergio George, George Meña, Bastiany, Gregory "Greko" Rojo and Nápoles. All songs were co-produced by Prince Royce and D'Lesly Lora. 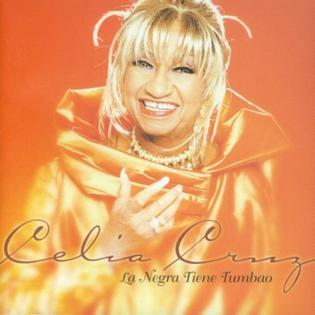 "Ese Hombre" is a song written by Ana Magdalena and Manuel Alejandro and performed by Spanish recording artist Rocío Jurado for her studio album Señora (1979). It was released by RCA Records as a B-side to "Señora" in 1980. In 1994, American salsa singer La India recorded the track for her first solo album, Dicen Que Soy (1994), which was produced by Sergio George. Lyrically, the song is about a womanizer who lures women into a wrongful relationship filled with lies and deceit.

"Ríe y Llora" (English: "Laugh and Cry") is a song performed by Cuban recording artist Celia Cruz. The song was written by Sergio George and Fernando Osorio, produced by George and released as the lead single from Cruz's final studio album Regalo del Alma (2003) on 12 July 2003. It was the final song recorded by Cruz, following being sidelined by a brain trumor and before her death on 16 July 2003.