Top of the World (D'banj song)

"Top of the World" is a song by Nigerian singer D'banj. It serves as the fifth single from the album D'Kings Men (2013), a collaboration between members of D'banj's label DB Records. The song is the first single to be released through Sony Music's RCA Africa label and DB Records since D'Banj signed his multi-album deal with Sony Music Entertainment Africa. [1] It was the official SuperSport anthem for the 2013 African Nations Cup, and peaked at number 10 on Pulse Nigeria's Music Video charts. [2] It also peaked at number 4 on Afribiz's Top 100 music chart. [3]

The visuals for "Top of the World" was shot and directed by Godfather Productions. It highlights the Super Eagles' tournament run at the 2013 African Cup of Nations. Moreover, it contains clips of D'banj's performance at the closing ceremony of the aforementioned tournament, which took place at the FNB Stadium in Johannesburg. [4] According to OkayAfrica, "the clip features D'banj singing the song into a forest of mics while performing alongside a dreadlocked guitarist and rock drummer" [5] D'banj dedicated the song and its music video to the Super Eagles, who won the aforementioned cup after a 19-year drought. [6] [7]

"Top of the World" received positive reviews from music critics and consumers. Charles Mgbolu of Vanguard described the song as being "from the soul" and further said it "tells a dramatic story". [8] BellaNaija added that with the release of the song, "Bangalee proves he is truly a force of nature in the African music scene." [9] Monty Entertainment wrote, "If you listen to the songs he has released recently, you will notice that they are different from the D'banj we knew when he was still under Mo'Hits Records. D'Banj even displayed his vocal skills on this new track, and for a guy like him, it was not bad at all. [10]

Oladapo Daniel Oyebanjo, better known by his stage name D'banj, is a Nigerian musician, singer, songwriter, rapper, entrepreneur and television personality. He has won several music awards, including the awards for Best African Act at the MTV Europe Music Awards 2007, Artist of the Year at the MTV Africa Music Awards 2009, Best International Act: Africa at the 2011 BET Awards, and Best-selling African Artist at the 2014 World Music Awards, Evolution award at the 2015 MTV Africa Music awards

Mavin Records is a Nigerian record label founded by record producer and recording artist Don Jazzy on May 8, 2012. The label's inception came to fruition following the closure of Mo' Hits Records, a record label owned by the aforementioned producer and D'banj. The label is home to recording artists such as Korede Bello, Dr SID, D'Prince, Di'Ja, Johnny Drille, Ladipoe, DNA Twins, Rema and Crayon. It also houses producers such as Jazzy himself, Altims and Baby Fresh. In 2014, DJ Big N became the label's official disc jockey. Tiwa Savage, Wande Coal, Reekado Banks and Iyanya were all formerly signed to the label. On May 8, 2012, the label released its compilation album Solar Plexus. In January 2019, Mavin Records secured a multi-million dollar investment from Kupanda Holdings, a subsidiary of Kupanda Capital and TPG Growth.

"Oliver Twist" is a song by Nigerian singer-songwriter D'banj. The track was first released in the United Kingdom on 11 May 2012, as the first single from DB Records' compilation album, D'Kings Men (2013). For the chart week dated 26 May, "Oliver Twist" debuted at number nine on the UK Singles Chart—marking the musician's first chart appearance. Lyrically, the song expresses D'banj's crave for more women, relating to how the fictional character Oliver Twist asked for more gruel.

Olamide Adedeji, popularly known as Olamide, is a Nigerian hip hop recording artist. He records in Yoruba, and English. In 2011, he released his debut studio album Rapsodi while signed to Coded Tunes. YBNL, his follow-up album, was released under his label imprint YBNL Nation. The album was supported by the singles "First of All", "Voice of the Street", "Stupid Love", and "Ilefo Illuminati". On 7 November 2013, he released his third studio album Baddest Guy Ever Liveth. The album's singles include "Durosoke" and "Yemi My Lover". On 17 July 2013, Olamide became the first Nigerian to sign an endorsement deal with Cîroc. 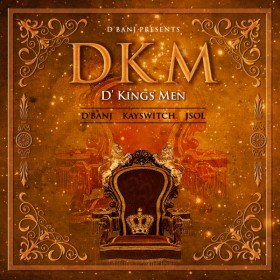 D'Kings Men is a compilation album by recording artists of Nigerian record label DB Records. It was released on June 24, 2013, by the label and Sony. The album was produced by Don Jazzy, Jay Sleek and Dee Vee. It features guest appearances from Kanye West, Big Sean, Snoop Lion, Fally Ipupa, Durella, Olamide, Ikechukwu and Naeto C. D'Kings Men produced eleven singles—"Oliver Twist", "Sister Caro", "Oyato", "Bachelor", "Top of the World", "Cashflow", "Don't Tell Me Nonsense", "For Example", "Finally", "Why You Love Me" and "Obimo ". It received mixed reviews from music critics, who panned its lyrics and sound. 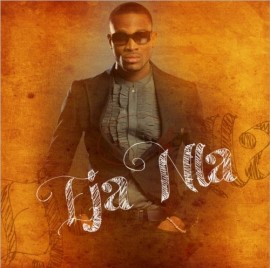 "Finally" is a song recorded by Nigerian recording artist D'banj for the compilation album, D'Kings Men (2013). The song serves as the tenth commercial single from the album, which features collaborations between members of D'banj's DB Records label. The track premiered at a promotional event for the record, which was headlined by several Nigerian artists, including the singer. Solely written and produced by D'Banj himself, the recording is an EDM and pop song with lyrics predicting that any girl will beg for D'banj's love and compassion.

"Oyato" is a song by Nigerian singer D'banj. It serves as the third single from the album D'Kings Men (2013), a collaboration between members of D'banj's label DB Records. It was produced by Jay Sleek. Mcomm, a Nigerian music distribution network, released the song on July 14, 2012. "Oyato" is D'banj's first Nigerian release as an independent recording artist since his departure from Mo' Hits Records. According to NotJustOk, the song "propelled the pop icon’s desire to reconnect with his numerous fans after the soar away success of his Oliver single in the UK."

"Mr Endowed" is a song by Nigerian singer D'banj, released on May 23, 2010. Produced by Don Jazzy, it was included in the track listing for Mr. Endowed, an album that was never released due to D'banj's exit from Mo' Hits Records. The song was reportedly recorded after D'banj signed a recording contract with Kanye West's GOOD Music. In an interview with April Woodard of BET, D'banj confirmed the rumours about the aforementioned contract.

"Fall in Love" is a song by Nigerian singer and harmonica player D'banj. It serves as a single from his third studio album, The Entertainer (2008). The song was produced by Don Jazzy. According to Africa Review, it earned D'banj national stardom in Nigeria.

"Aboki" is a song by Nigerian hip hop recording artist Ice Prince. It was released on August 28, 2012, serving as the lead single from his second studio album, Fire of Zamani (2013). The song was produced by Chopstix and released along with "More". It peaked at number 92 on Afribiz's Top 100 chart.

"Khona" is a song by South African duo Mafikizolo. It was released as the lead single from their eighth studio album, Reunited (2013). The song features additional vocals from Uhuru and was released by Kalawa Jazmee Records. In South Africa, the song peaked at number 1 on YFM, Umhlobo Wenene FM, Ukhozi FM and True FM. Moreover, it peaked at number 2 on the Metro FM music chart. In Nigeria, the song received numerous radio airplay on the Beat 99.9 FM and Cool FM. On the Prisoner of Class music chart, the song made the list of the top 10 African songs of 2013, peaking at number 1. Furthermore, it peaked at number 1 on Afribiz's Top 100 chart.

David Adedeji Adeleke, better known as Davido, is an American-born Nigerian singer, songwriter, leading contemporary artist, and a record producer. He is often regarded as one of the biggest artistes in Africa.

"Skelewu" is a song by Nigerian singer & songwriter Davido, released on 13 August 2013. It was produced by Shizzi and peaked at number 1 on Afribiz's Top 100 chart. Premium Times newspaper ranked "Skelewu" fifth on its list of the top 10 songs of 2013. It gained popularity in Nigeria after Davido announced the Skelewu dance competition. The song was endorsed by African footballers Emmanuel Adebayor and Samuel Eto'o. In September 2016, "Skelewu" appeared on Queen of Katwe's soundtrack album. 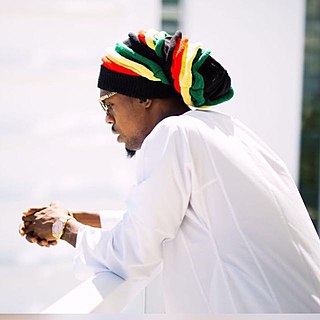 Patrick Nnaemeka Okorie, better known by his stage name Patoranking, is a Nigerian reggae-dancehall singer and songwriter. Born and raised in Ijegun-Egba Satellite Town, Patoranking hails from Onicha, Ebonyi State. He started his music career doing underground collaborations with artists such as XProject, Konga, Slam and Reggie Rockstone. He signed a record deal with K-Solo's Igberaga Records in 2010, releasing "Up in D Club" under the outfit. Patoranking became a protégé of Dem Mama Records after collaborating with Timaya on his song "Alubarika". In February 2014, he signed a record deal with Foston Musik and released "Girlie O", a single that put him in the limelight. On 9 February 2015, Patoranking announced on Instagram that he signed a distribution deal with VP Records. on September 28 Patoranking released a song titled Abule one he released ahead of his album scheduled to be released later soon in 2020 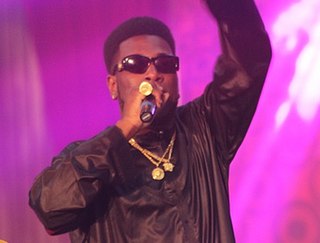 Damini Ebunoluwa Ogulu, known professionally as Burna Boy, is a Nigerian singer, songwriter, rapper and dancer. He rose to prominence in 2012 after releasing "Like to Party", the lead single from his debut studio album L.I.F.E (2013). In 2017, Burna Boy signed with Bad Habit/Atlantic Records in the United States and Warner Music Group internationally. His third studio album Outside marked his major-label debut. In 2019, he won Best International Act at the 2019 BET Awards, and was announced as an Apple Music Up Next artist. His fourth studio album African Giant was released in July 2019; it won Album of the Year at the 2019 All Africa Music Awards and was nominated for Best World Music Album at the 62nd Annual Grammy Awards. He was awarded the African Artiste of the year at the 2020 VGMA's. 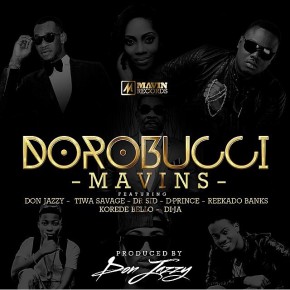 "Dorobucci" is a song by The Mavins, a collective composed of Don Jazzy, Tiwa Savage, Dr SID, Reekado Banks, Korede Bello, Di'Ja and D'Prince. Released on May 1, 2014, it received generally positive reviews from music critics. Positive remarks went towards its production, instrumentation and composition. On the contrary, the music video received mixed reviews. While some critics described the video as brilliant, others felt it was dull and not up to par. 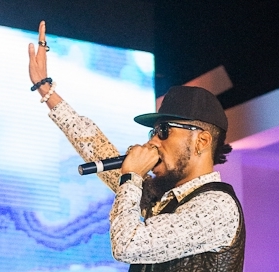 Chibuzor Nelson Azubuike, better known as Phyno, is a Nigerian rapper, singer, songwriter and record producer. He started his music career as a producer in 2003, and is renowned for rapping in the Igbo language. His debut studio album No Guts No Glory was released in 2014. It was supported by four singles: "Ghost Mode", "Man of the Year", "Parcel" and "O Set". Phyno has worked with artists such as Timaya, Flavour, Ruggedman, Bracket, J. Martins and Mr Raw.

"Eminado" is a song by Nigerian singer Tiwa Savage. It features vocals from Don Jazzy and was released as the seventh single from her debut studio album Once Upon a Time (2013). The song peaked at number 2 on MTV Base's Official Naija Top 10 chart from March 7 through March 13, 2014. Vanguard newspaper ranked it 10th on its list of the top ten hit songs that made 2013. "Eminando" received generally positive reviews from music critics and consumers. On the contrary, the music video was criticized for bearing close resemblance to Tumi and the Volume's "Asinamali" video.