A topogenic sequence is a collective term used for a peptide sequence present at nascent proteins essential for their insertion and orienting in cellular membranes. The sequences are also used to translocate proteins across various intracellular membranes, [1] and ensure they are transported to the correct organelle after synthesis. [2] The position of the sequence may be at the end, e.g. N-terminal signal sequence, or in mid parts of the nascent protein, e.g. stop-transfer anchor sequences and signal-anchor sequences. [3] If the sequence is at the end of the polypeptide, it is cleaved off after entering the ER-lumen (via a translocon) by a signal peptidase, and subsequently degraded.

The cell membrane is a biological membrane that separates the interior of all cells from the outside environment which protects the cell from its environment. Cell membrane is consisted of a lipid bilayer, including cholesterols that sit between phospholipids to maintain their fluidity under various temperature, in combination with proteins such as integral proteins, and peripheral proteins that go across inside and outside of the membrane serving as membrane transporter, and loosely attached to the outer (peripheral) side of the cell membrane acting as several kinds of enzymes shaping the cell, respectively. The cell membrane controls the movement of substances in and out of cells and organelles. In this way, it is selectively permeable to ions and organic molecules. In addition, cell membranes are involved in a variety of cellular processes such as cell adhesion, ion conductivity and cell signalling and serve as the attachment surface for several extracellular structures, including the cell wall, the carbohydrate layer called the glycocalyx, and the intracellular network of protein fibers called the cytoskeleton. In the field of synthetic biology, cell membranes can be artificially reassembled.

As an example, the vast majority of all known complex plastid preproteins (an 'unactivated' protein) encoded in the nucleus possess a topogenic sequence. [2]

Protein targeting or protein sorting is the biological mechanism by which proteins are transported to their appropriate destinations in the cell or outside it. Proteins can be targeted to the inner space of an organelle, different intracellular membranes, plasma membrane, or to exterior of the cell via secretion. This delivery process is carried out based on information contained in the protein itself. Correct sorting is crucial for the cell; errors can lead to diseases.

A target peptide is a short peptide chain that directs the transport of a protein to a specific region in the cell, including the nucleus, mitochondria, endoplasmic reticulum (ER), chloroplast, apoplast, peroxisome and plasma membrane. Some target peptides are cleaved from the protein by signal peptidases after the proteins are transported.

The translocon is a complex of proteins associated with the translocation of polypeptides across membranes. In eukaryotes the term translocon most commonly refers to the complex that transports nascent polypeptides with a targeting signal sequence into the interior space of the endoplasmic reticulum (ER) from the cytosol. This translocation process requires the protein to cross a hydrophobic lipid bilayer. The same complex is also used to integrate nascent proteins into the membrane itself. In prokaryotes, a similar protein complex transports polypeptides across the (inner) plasma membrane or integrates membrane proteins. Bacterial pathogens can also assemble other translocons in their host membranes, allowing them to export virulence factors into their target cells. 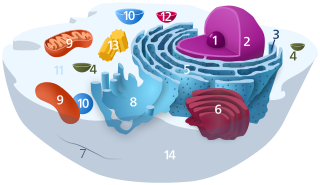 The endoplasmic reticulum (ER) is a type of organelle found in eukaryotic cells that forms an interconnected network of flattened, membrane-enclosed sacs or tube-like structures known as cisternae. The membranes of the ER are continuous with the outer nuclear membrane. The endoplasmic reticulum occurs in most types of eukaryotic cells, but is absent from red blood cells and spermatozoa. 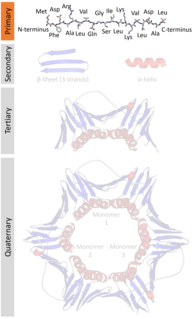 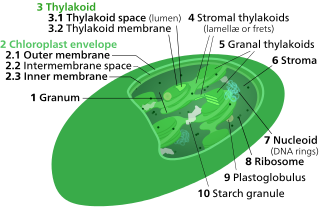 A thylakoid is a membrane-bound compartment inside chloroplasts and cyanobacteria. They are the site of the light-dependent reactions of photosynthesis. Thylakoids consist of a thylakoid membrane surrounding a thylakoid lumen. Chloroplast thylakoids frequently form stacks of disks referred to as grana. Grana are connected by intergranal or stroma thylakoids, which join granum stacks together as a single functional compartment.

The signal recognition particle (SRP) is an abundant, cytosolic, universally conserved ribonucleoprotein that recognizes and targets specific proteins to the endoplasmic reticulum in eukaryotes and the plasma membrane in prokaryotes.

A signal peptide is a short peptide present at the N-terminus of the majority of newly synthesized proteins that are destined towards the secretory pathway. These proteins include those that reside either inside certain organelles, secreted from the cell, or inserted into most cellular membranes. Although most type I membrane-bound proteins have signal peptides, the majority of type II and multi-spanning membrane-bound proteins are targeted to the secretory pathway by their first transmembrane domain, which biochemically resembles a signal sequence except that it is not cleaved. They are a kind of target peptide.

The C-terminus is the end of an amino acid chain, terminated by a free carboxyl group (-COOH). When the protein is translated from messenger RNA, it is created from N-terminus to C-terminus. The convention for writing peptide sequences is to put the C-terminal end on the right and write the sequence from N- to C-terminus.

The N-terminus (also known as the amino-terminus, NH2-terminus, N-terminal end or amine-terminus) is the start of a protein or polypeptide referring to the free amine group (-NH2) located at the end of a polypeptide. Normally the amine group is bonded to another carboxylic group in a protein to make it a chain, but since the end of a protein has only 1 out of 2 areas chained, the free amine group is referred to the N-terminus. By convention, peptide sequences are written N-terminus to C-terminus, left to right in LTR languages. This correlates the translation direction to the text direction (because when a protein is translated from messenger RNA, it is created from N-terminus to C-terminus - amino acids are added to the carbonyl end).

Signal recognition particle (SRP) receptor, also called docking protein, is a dimer composed of 2 different subunits that are associated exclusively with the rough ER in mammalian cells. Its main function is to identify the SRP units. SRP is a molecule that helps the ribosome-mRNA-polypeptide complexes to settle down on the membrane of the endoplasmic reticulum.

Maltose-binding protein (MBP) is a part of the maltose/maltodextrin system of Escherichia coli, which is responsible for the uptake and efficient catabolism of maltodextrins. It is a complex regulatory and transport system involving many proteins and protein complexes. MBP has an approximate molecular mass of 42.5 kilodaltons.

The SecY protein is the main transmembrane subunit of the bacterial Sec or Type II secretory pathway and a protein-secreting ATPase complex, also known as a SecYEG translocon. Homologs of the SecYEG complex are found in eukaryotes, where the subunit is known as Sec61α, and in archaea.

Chloroplasts have their own DNA, often abbreviated as cpDNA. It is also known as the plastome when referring to genomes of other plastids. Its existence was first proven in 1962, and first sequenced in 1986—when two Japanese research teams sequenced the chloroplast DNA of liverwort and tobacco. Since then, hundreds of chloroplast DNAs from various species have been sequenced, but they are mostly those of land plants and green algae—glaucophytes, red algae, and other algae groups are extremely underrepresented, potentially introducing some bias in views of "typical" chloroplast DNA structure and content. 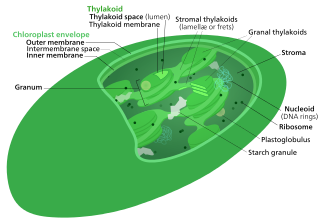 David Domingo Sabatini is an Argentine-American cell biologist and the Frederick L. Ehrman Professor Emeritus of Cell Biology in the Department of Cell Biology at New York University School of Medicine, which he chaired from 1972 to 2011. Sabatini's major research interests have been on the mechanisms responsible for the structural complexity of the eukaryotic cell. Throughout his career Sabatini has been recognized for his efforts in promoting science in Latin America.

Bitopic proteins are transmembrane proteins that span the lipid bilayer only one time. These proteins may constitute up to 50% of all transmembrane proteins, depending on the organism, and contribute significantly to the network of interactions between different proteins in cells, including interactions via transmembrane helices. They usually include one or several water-soluble domains situated at the different sides of biological membranes, for example in single-pass transmembrane receptors. Some of them are small and serve as regulatory or structure-stabilizing subunits in large multi-protein transmembrane complexes, such as photosystems or the respiratory chain.