Torbay Hospital is South Devon's main hospital. It is managed by the Torbay and South Devon NHS Foundation Trust.

The hospital was founded as the Torbay Hospital, Provident Dispensary and Eye Infirmary in 1844. [1] Construction started in 1850 with the first wing being completed in 1851 and a second wing being added in 1878. [2]

After the hospital management decided to build a new hospital, a property known as Hengrave House was purchased from Major K.P. Kitson and a design was developed by Percy Adams. [3] Much of the finance was donated by Ella and Violet Wills, daughters of Sir Edward Payson Wills, 1st Baronet. [4] The new facility was officially opened in 1928 and a chapel, which had been designed by Charles Holden, was added in 1930. [5] The hospital joined the National Health Service in 1948. [1]

The hospital contains an accident & emergency department, which is open 24 hours a day, 365 days a year [6] and contains a grass helipad. [7]

The hospital has 650 parking spaces for visitors and 1,100 for staff. Staff pay at rates linked to their earnings from £0.50 to £2.50 per day. It uses technology supplied by WPS Parking Solutions to manage the car parks, which are of varying sizes scattered around the site. The parking for patients and visitors is closer to the hospital. Wards can give out daily or weekly tickets. [8] 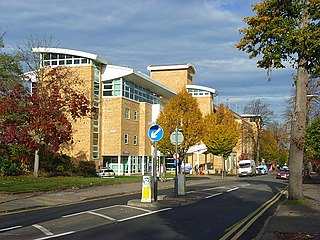 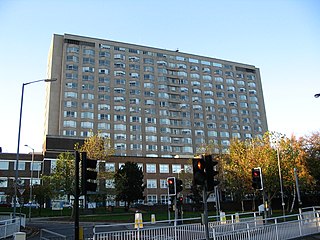 The Royal Hallamshire Hospital is a general and teaching hospital located in Sheffield, South Yorkshire, England. It is in the city's West End, facing Glossop Road and close to the main campus of University of Sheffield and the Collegiate Crescent campus of Sheffield Hallam University. The hospital is run by the Sheffield Teaching Hospitals NHS Foundation Trust.

The Norfolk and Norwich University Hospital (NNUH) is a National Health Service academic teaching hospital in the Norwich Research Park on the western outskirts of Norwich, England. 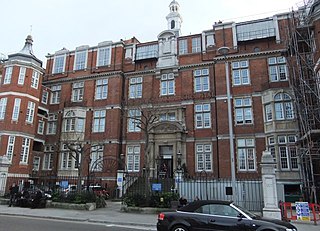 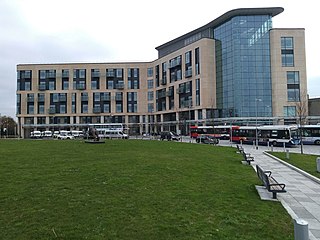 Southmead Hospital is a large public National Health Service hospital, situated in the Southmead ward in the northern suburbs of Bristol, England. It is part of the North Bristol NHS Trust. The 800-bed Brunel Building opened in May 2014, to provide services, which transferred from Frenchay Hospital in advance of its closure. The hospital now covers 60 acres (24 ha).

St. Peter’s Hospital is an NHS district general hospital in Chertsey, Surrey, England. It has 400 beds and a wide range of acute care services, including an Accident & Emergency department. It is located between Woking and Chertsey near junction 11 of the M25 motorway and is managed by Ashford and St Peter's Hospitals NHS Foundation Trust.

The Royal United Hospital (RUH) is a major acute-care hospital, located in the Weston suburb of Bath, England, which lies approximately 1.5 miles (2.4 km) west of the city centre. The hospital has 565 beds and occupies a 52 acres (21 ha) site. It is the area's major accident and emergency hospital, with a helicopter landing point on the adjacent Lansdown Cricket Club field. The hospital is operated by the Royal United Hospitals Bath NHS Foundation Trust. 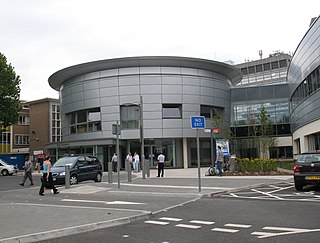 The South Western Ambulance Service NHS Foundation Trust (SWASFT) is the organisation responsible for providing ambulance services for the National Health Service (NHS) across South West England. On 1 March 2011, SWASFT was the first ambulance service in the country to become a NHS foundation trust. On 1 February 2013, neighbouring Great Western Ambulance Service merged with the trust.

South Central Ambulance Service NHS Foundation Trust (SCAS) is the ambulance service for the counties of Buckinghamshire, Oxfordshire, Berkshire and Hampshire. It is a foundation trust of the National Health Service, and one of ten NHS ambulance trusts in England. 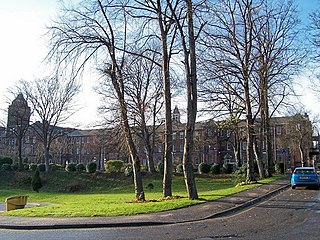 The Northern General Hospital is a large teaching hospital and Major Trauma Centre in Sheffield, England. Its departments include Accident and Emergency for adults, with children being treated at the Sheffield Children's Hospital on Western Bank. The hospital is managed by the Sheffield Teaching Hospitals NHS Foundation Trust.

Torbay and Southern Devon Health and Care NHS Trust was a NHS trust that provided health and care in and around Torbay, Devon, England. It was a pioneer within the NHS in England in demonstrating the advantages of integrating health and social care into one organisation. And "one of three areas that have been working to learn from Kaiser Permanente, a leading United States health maintenance organisation." It was established as Torbay Care Trust in October 2005, with responsibility for social care in a partnership agreement with Torbay Borough Council. From then until April 2012, the trust had responsibility for both commissioning (buying) and providing integrated health and social care services to people in the Torbay area. As part of the changes associated with the Health and Social Care Act 2012 the commissioning function was detached from the trust.

Torbay and South Devon NHS Foundation Trust is the main provider of NHS services in Torbay. It runs Torbay Hospital. The area is seen as pioneering in the English NHS because of the work done with Torbay and Southern Devon Health and Care NHS Trust to integrate health and social care. In November 2013 it was selected as one of 14 Pioneer site for integrated care development. 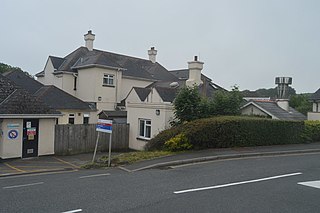