Denmark, officially the Kingdom of Denmark, is a Nordic country. Denmark proper, which is the southernmost of the Scandinavian countries, consists of a peninsula, Jutland, and an archipelago of 443 named islands, with the largest being Zealand, Funen and the North Jutlandic Island. The islands are characterised by flat, arable land and sandy coasts, low elevation and a temperate climate. The southernmost of the Scandinavian nations, Denmark lies southwest of Sweden and south of Norway, and is bordered to the south by Germany. The Kingdom of Denmark also includes two autonomous territories in the North Atlantic Ocean: the Faroe Islands and Greenland. Denmark has a total area of 42,924 km2 (16,573 sq mi), land area of 42,394 km2 (16,368 sq mi), and the total area including Greenland and the Faroe Islands is 2,210,579 km2 (853,509 sq mi), and a population of 5.8 million.

The Denmark national football team represents Denmark in international football competition, and is controlled by the Danish Football Association (DBU), the governing body for the football clubs which are organized under DBU. Denmark's home stadium is Parken Stadium in the Østerbro district of Copenhagen, and their head coach is Åge Hareide.

Esbjerg forenede Boldklubber is a professional Danish football club from the port city of Esbjerg in West Jyland. The club was formed in 1924, as a merger between Esbjerg Boldklub af 1898 and Esbjerg Amatørklub af 1911. The club has training facilities and stadium at Gl. Vardevej in Esbjerg, and plays in blue and white striped shirts. Esbjerg fB is one of the more successful clubs in Denmark in terms of trophies. They have won the Danish championship five times and three Danish cup titles. The main sponsor is Stofa and the club's kit sponsor is Nike. The official fanclub of Esbjerg fB is Blue Knights. In 2005 EfB took over the management of the elite ice hockey club, Esbjerg Ishockey Klub (EIK), which is now called EfB Ishockey.

Boldklubben Fremad Amager is a Danish professional football club based in the district of Amager Vest, Copenhagen. As of the 2019/20-season, the club's first senior men's team play in 1st Division. The club consists of an amateur department and a professional section, that is primarily owned by Fremad Amager Elite ApS – a private limited company created on 2 December 2013, initially with 80/20% ownership split between the new investors and the remaining 20% by the members – and small portion by the club's amateur department. The club have primarily played their home games at Sundby Idrætspark since the stadium's inauguration in 1922. Fremad Amager's last spell in the highest football league in Denmark was in the autumn of 1994. Ever since the first participation in the first nationwide league tournament in 1927, and subsequent promotion in 1929, the club has spent the majority of its history — with the exception of two seasons — in the different divisional structures. The club reached the Danish Cup final in 1971/72-season while playing at the second highest league level, but lost against Vejle BK, who had also won the Danish championship in 1971. As a result, BK Fremad Amager participated in the 1972–73 European Cup Winners' Cup, but did not advance beyond the first round. 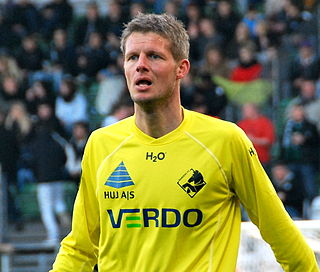 Chris Sørensen is a retired Danish professional football player. He has played five matches for the Denmark national football team.

Martin Vingaard Hansen is a Danish footballer who plays as a midfielder for HB Køge in the Danish 1st Division.

DBU Copenhagen is the local governing body for association football and futsal in Copenhagen, Denmark. They are responsible for the governance and development of men's and women's football at all levels in the region. DBU Copenhagen is a member of the Union of Local Football Associations in Denmark (FLU) under the Danish Football Association (DBU) and National Olympic Committee and Sports Confederation of Denmark (DIF). The headquarters is at the Svanemølleanlægget at Østerbro after previously being located the national football stadium. Clubs situated in the municipalities of Copenhagen, Frederiksberg, Gentofte, Tårnby and Dragør can be accepted as members of DBU Copenhagen. Due to historical reasons a number of older clubs from other municipalities are also member of the association. In 2015 the association consisted of 150 clubs and 39,160 members with the oldest Danish association football club Kjøbenhavns Boldklub (KB) being the largest club membership-wise only surpassed by Brøndbyernes Idrætsforening on a national level.

Simon Thorup Kjær is a Danish professional footballer who plays as a centre back for Italian club Atalanta on loan from Spanish club Sevilla and captains the Denmark national team.

The 2008-09 season is the 119th season of competitive football in Denmark.

Events from the year 1928 in Denmark.

The 2011 Danish Cup Final was a football match that decided the winner of the 2010–11 Danish Cup. It was played on 22 May 2011 at 18:45 CEST, between FC Nordsjælland and FC Midtjylland, the same two teams who competed in last year's final, with FC Nordsjælland emerging victorious once again, 3–2.

The 2014–15 Danish Cup was the 61st season of the Danish Cup competition. It was the fourth season since its rebranding as the DBU Pokalen. The winner of the competition qualified for the second qualifying round of the 2015–16 UEFA Europa League.

The 2016–17 Danish Superliga season was the 27th season of the Danish Superliga, which decides the Danish football championship. The season was the first with a new league structure in which 14 clubs play each other home and away, until the league was split up in championship and relegation play-offs. The new structure was inspired by the one used by the Belgian First Division A and was approved by the Danish FA, Dansk Boldspil-Union, on 28 June 2015.

Copenhagen Series for men, unofficially also known as Københavnerserien and often shortened to KS serien and KS Herre, is the highest division for men organised by the regional football association DBU København (DBUK) and one of the fifth-highest divisions overall in the Danish football league system.

Zealand Series is the highest division for men organized by the regional association DBU Sjælland and one of the fifth-highest divisions overall in the Danish football league system. The Zealand Association Football Championship was introduced a week after the association's foundation in 1902 and was played in a cup format until actual league formats organized on a double round-robin basis including promotions and relegations were introduced in 1927 with the highest ranking division being named Mesterrækken. At the time of the league's introduction, its was placed at the top of the Danish football league system, but has since been moved to its current status as the fifth best level in Danish football, after a short period as the sixth best level, below the Denmark Series at the fourth level.

Battle of Jutland is the rivalry between two of the oldest clubs in Danish football history Aalborg BK and Aarhus GF.