Last updated March 15, 2019
in Federation of Bosnia and Herzegovina, Bosnia

Torlakovac is a small village near Donji Vakuf, Bosnia and Herzegovina. 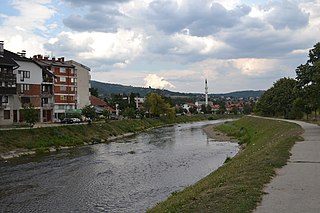 Bergondo is a municipality in province of A Coruña, in the autonomous community of Galicia in northwestern Spain. It has an area of 32.85 km2, a population of 6,413, and a population density of 195.22 people/km2

Sucháň is a village and municipality in the Veľký Krtíš District of the Banská Bystrica Region of southern Slovakia.

Bziny is a village and municipality in Dolný Kubín District in the Zilina Region of northern Slovakia.

Bihardancsháza is a village in Hajdú-Bihar county, in the Northern Great Plain region of eastern Hungary.

Ștefan Vodă is a commune in Călărași County, Romania. It is composed of a single village, Ștefan Vodă.

Lichinga District is a district of Niassa Province in north-western Mozambique. The principal town is Lichinga.

Gogavan is a town in the Lori Province of Armenia.

Orodel is a commune in Dolj County, Romania with a population of 3,242 people. It is composed of five villages: Bechet, Călugărei, Cornu, Orodel, and Teiu.

Ipotești is a commune in Olt County, Romania. It is composed of a single village, Ipotești. This was part of Milcov Commune until 2004, when it was split off.

Vulturești is a commune in Olt County, Romania. It is composed of four villages: Dienci, Valea lui Alb, Vlăngărești and Vulturești.

Tielmes is a municipality of the Community of Madrid, Spain.

Shatbi is a village in western central Yemen. It is located in the San‘a’ Governorate.

Ereda is a village in Alutaguse Parish, Ida-Viru County in northeastern Estonia.

Sikakurmu is a village in Meeksi Parish, Tartu County in eastern Estonia.

Seo is an administrative unit known as Union council of Kohistan District in the Khyber Pakhtunkhwa province of Pakistan.