Trip valve mechanisms are a class of steam engine valve gear developed to improve efficiency. The trip mechanism allows the inlet valve to be closed rapidly, giving a short, sharp cut-off. The valve itself can be a drop valve or a Corliss valve.

Trip valve gear was applied to larger stationary engines. It was not used in transport applications, [ft 1] as it was not suitable for high speed. [1]

Advantages of a Trip Valve Gear

When using the Corliss and other trip valve gears, the possible advantages are:

Disadvantages of a Trip Valve Gear

The trip valve-gear, which is almost always a multiple valve-gear, has the potential to face the following disadvantages: 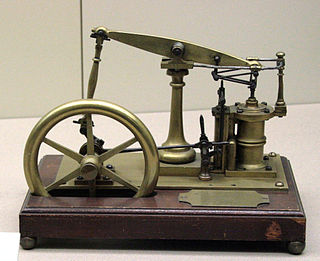 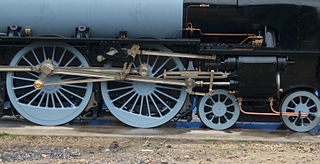 In a piston engine, the valve timing is the precise timing of the opening and closing of the valves. In an internal combustion engine those are usually poppet valves and in a steam engine they are usually slide valves or piston valves.

The Stephenson valve gear or Stephenson link or shifting link is a simple design of valve gear that was widely used throughout the world for all kinds of steam engines. It is named after Robert Stephenson but was invented by his employees.

In a steam engine, cutoff is the point in the piston stroke at which the inlet valve is closed. On a steam locomotive, the cutoff is controlled by the reversing gear.

The slide valve is a rectilinear valve used to control the admission of steam into, and emission of exhaust from, the cylinder of a steam engine. 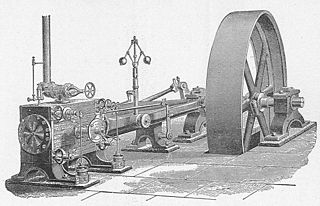 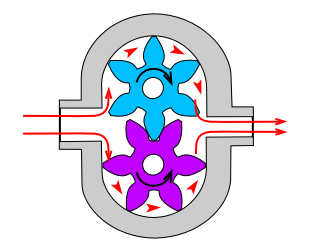 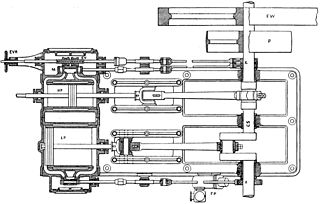 An expansion valve is a device in steam engine valve gear that improves engine efficiency. It operates by closing off the supply of steam early, before the piston has travelled through its full stroke. This cut-off allows the steam to then expand within the cylinder. This expanding steam is still sufficient to drive the piston, even though its pressure decreases as it expands. As less steam is supplied in the shorter time for which the valve is open, use of the expansion valve reduces the steam consumed and thus the fuel required. The engine may deliver two-thirds of the work, for only one-third of the steam.

The double-beat valve, drop valve or equilibrium valve is a type of poppet valve arranged to allow it to be opened against a high pressure with a minimum of force. One of its uses is in steam engines to admit steam to the cylinders and to release the exhaust. In stationary steam engines it is usually operated by trip valve gear while in railway locomotives a valve gear such as Caprotti is used.

A Johnson Bar is a control lever on a steam locomotive, used to control the timing of the admission of steam into the locomotive's cylinders. By controlling this timing, the amount of power delivered to the wheels is regulated, as is the direction that the wheels rotate, giving the lever the alternate name of the reversing lever. This is the term employed in British English, while the term 'Johnson Bar' is the norm in the United States.

Frederick Ellsworth Sickels or Sickles was an American inventor, best known for the invention of a cut-off valve for steam engines in 1841. 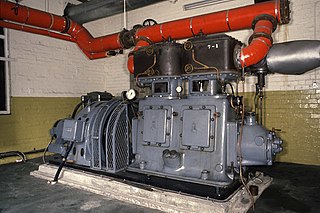 A bash valve is a valve within a piston engine, used to control the admission of the working fluid. They are directly actuated valves, operated by contact between the piston and the valve tip.