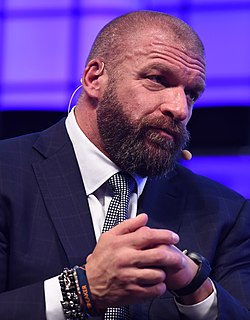 Paul Michael Levesque, better known by the ring name Triple H, is an American professional wrestler, business executive, and actor. He is currently signed to WWE and is the Executive Vice President of Global Talent Strategy Development and COO for WWE. He is also the founder and executive producer of NXT.

Michael Shawn Hickenbottom, better known by his ring name Shawn Michaels, is an American retired professional wrestler, actor, and television presenter. Widely regarded as one of the greatest professional wrestlers of all time, he is known by the nicknames "Heartbreak Kid", "The Showstopper", and "Mr. WrestleMania". 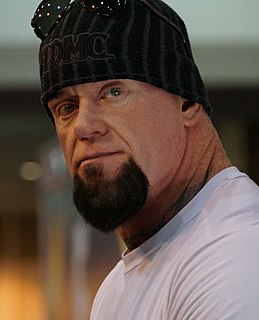 Mark William Calaway, is an American retired professional wrestler. He is best known for his career in WWE from 1990 to 2020 under the ring name The Undertaker. 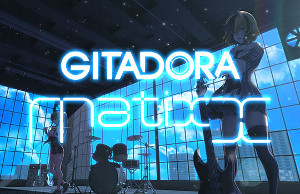 GuitarFreaks (ギターフリークス) is a music video game series produced by Konami. It is a rhythm game where the player uses a controller to simulate the playing of an electric guitar. The game consists of music predominantly from the rock music, rock and roll and J-pop genres. It is considered one of the most influential video games of all time, for having laid the foundations for popular guitar-based rhythm games, such as the Guitar Hero series. Working Designs attempted to bring Guitar Freaks PlayStation 2 games in the U.S., but patent problems with the guitar controller prevented the project from moving forward.

WrestleMania XIX was the 19th annual WrestleMania professional wrestling pay-per-view (PPV) event produced by World Wrestling Entertainment (WWE). It took place on March 30, 2003, at Safeco Field in Seattle, Washington. The event was the first WrestleMania held in the state of Washington. A record-breaking 54,097 fans from all fifty states and numerous countries from around the world at Safeco Field resulted in a gate attendance grossing $2.76 million. 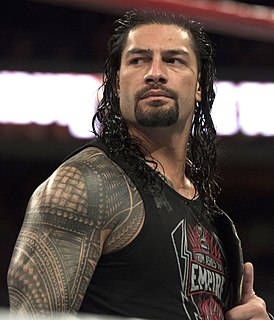 Leati Joseph "Joe" Anoa'i is a Samoan-American professional wrestler, actor, and former professional gridiron football player. He is currently signed to WWE, where he performs on the SmackDown brand under the ring name Roman Reigns, and is the current WWE Universal Champion in his second reign. He is part of the Anoa'i wrestling family, which also includes his father Sika Anoaʻi, brother Rosey, and cousins The Usos, Dwayne "The Rock" Johnson, Yokozuna, Rikishi, Umaga, and The Tonga Kid.

Slayers – The Motion Picture, also known as Slayers Perfect and originally released in Japan simply as Slayers, is a 1995 Japanese animated comic fantasy adventure film directed by Hiroshi Watanabe and written by Kazuo Yamazaki, based on the novels by Hajime Kanzaka. It was the first animated entry released in the Slayers media franchise and received positive reviews from critics. In the film, young sorceresses Lina Inverse and Naga the Serpent reunite to go on vacation to the magical island of Mipross, but they soon find that things there are not quite what they seem and a mighty evil force might be behind this.

WrestleMania 25 was the 25th annual WrestleMania professional wrestling pay-per-view (PPV) event produced by World Wrestling Entertainment (WWE). It took place on April 5, 2009, at Reliant Stadium in Houston, Texas. The event featured talent from all three WWE brand divisions: Raw, SmackDown, and ECW. It was the second WrestleMania held in Houston; the first was WrestleMania X-Seven at the Reliant Astrodome, which was held in April 2001.

Backlash was a professional wrestling pay-per-view (PPV) event produced by World Wrestling Entertainment (WWE) for their Raw brand division. It took place on April 30, 2006, at the Rupp Arena in Lexington, Kentucky. It was the eighth event under the Backlash chronology. 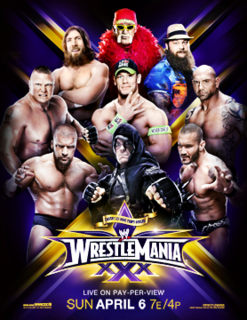 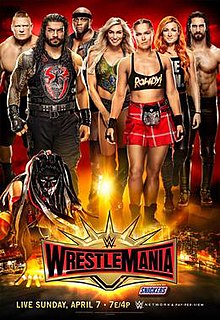 WrestleMania 35 was the 35th annual WrestleMania professional wrestling pay-per-view (PPV) event and WWE Network event produced by WWE for their Raw, SmackDown, and 205 Live brand divisions. It took place on April 7, 2019, at MetLife Stadium in East Rutherford, New Jersey. The event included the first-ever women's main event match in WrestleMania history. It was also the first WrestleMania since WrestleMania 2000 to not feature The Undertaker and the last event to feature Ronda Rousey. 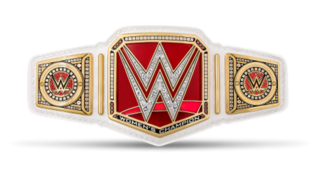 Sonic Mania is a 2017 platform video game published by Sega for Nintendo Switch, PlayStation 4, Xbox One, and Windows. Produced in commemoration of the Sonic the Hedgehog series' 25th anniversary, Sonic Mania homages the original Sega Genesis Sonic games, featuring speedy side-scrolling gameplay. It takes place over 12 levels, including several redesigned from past games. The story follows Sonic, Tails and Knuckles as they venture to defeat their nemesis Doctor Eggman and his robotic henchmen, the Hard-Boiled Heavies.

WrestleMania 36 was the 36th annual WrestleMania professional wrestling pay-per-view and WWE Network event produced by WWE for their Raw, SmackDown, and NXT brand divisions— the first to promote the NXT brand. It was filmed on March 25 and 26, 2020 and broadcast as a two-night event on April 4 and 5, marking the first time the event was broadcast over two nights as well as aired on tape delay. On pay-per-view, the two productions were sold as individual shows, with both available as a package deal.

WrestleMania 37 was the 37th annual WrestleMania professional wrestling pay-per-view and WWE Network event produced by WWE for their Raw and SmackDown brand divisions—unlike WrestleMania 36, it did not feature the NXT brand. The event took place as a two-night event on April 10 and 11, 2021, at the Raymond James Stadium in Tampa, Florida. Following the merger of the WWE Network with Peacock in the United States in March 2021, WrestleMania 37 became the first major WWE event for which U.S. subscribers could only stream the event via Peacock's WWE Network channel.

WrestleMania Backlash was a professional wrestling pay-per-view and WWE Network event produced by WWE for their Raw and SmackDown brand divisions. It took place on May 16, 2021 and was broadcast from the WWE ThunderDome, hosted at the Yuengling Center in Tampa, Florida. It was the 16th event in the Backlash chronology and was WWE's first pay-per-view to present the ThunderDome from the Yuengling Center during the COVID-19 pandemic, following a four-month residency at Tropicana Field in St. Petersburg, Florida. The 2021 event returned Backlash to its original position as the post-WrestleMania PPV, as the event was known for from 1999 to 2009. It was in turn renamed to "WrestleMania Backlash."