Tripteroidessp. No. 2 is a species of mosquito in the genus Tripteroides which has not yet been formally named. It is endemic to Sabah, Malaysian Borneo. T. sp. No. 2 is placed in the subgenus Rachionotomyia. In its larval stage, T. sp. No. 2 develops in the pitchers of Nepenthes species, especially N. rajah . As such, it is considered a nepenthebiont.

Nepenthes rajah is a carnivorous pitcher plant species of the family Nepenthaceae. It is endemic to Mount Kinabalu and neighbouring Mount Tambuyukon in Sabah, Malaysian Borneo. Nepenthes rajah grows exclusively on serpentine substrates, particularly in areas of seeping ground water where the soil is loose and permanently moist. The species has an altitudinal range of 1,500–2,650 metres (4,920–8,690 ft) a.s.l. and is thus considered a highland or sub-alpine plant. Due to its localised distribution, N. rajah is classified as an endangered species by the IUCN and listed on CITES Appendix I. 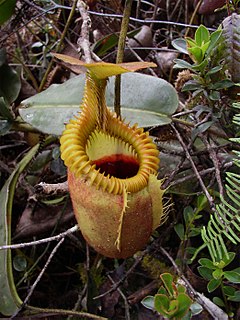 Nepenthes villosa, or the villose pitcher-plant, is a tropical pitcher plant endemic to Mount Kinabalu and neighbouring Mount Tambuyukon in northeastern Borneo. It grows at higher elevations than any other Bornean Nepenthes species, occurring at elevations of over 3,200 m (10,500 ft). Nepenthes villosa is characterised by its highly developed and intricate peristome, which distinguishes it from the closely related N. edwardsiana and N. macrophylla.

Nepenthes veitchii, or Veitch's pitcher-plant, is a Nepenthes species from the island of Borneo. The plant is widespread in north-western Borneo and can also be found in parts of Kalimantan. Nepenthes veitchii usually grows as an epiphyte, though the form from Bario seems to be strictly terrestrial and has not been observed to climb trees.

Shigeo Kurata is a Japanese botanist and Nepenthes taxonomist whose work in the 1960s and 1970s contributed much to the current popularity of these plants. His best-known work is the 1976 guide Nepenthes of Mount Kinabalu. Nepenthes kurata was named in his honour.

Nepenthes × kinabaluensis, or the Kinabalu Pitcher-Plant, is the natural hybrid between N. rajah and N. villosa. It was first collected near Kambarangoh on Mount Kinabalu, Borneo by Lilian Gibbs in 1910 and later mentioned by John Muirhead Macfarlane as "Nepenthes sp." in 1914. Although Macfarlane did not formally name the plant, he noted that "[a]ll available morphological details suggest that this is a hybrid between N. villosa and N. rajah". It was finally described in 1976 by Shigeo Kurata as N. × kinabaluensis. The name was first published in Nepenthes of Mount Kinabalu, but was a nomen nudum at the time as it lacked an adequate description and information on the type specimen. The name was subsequently published validly by Kurata in 1984. 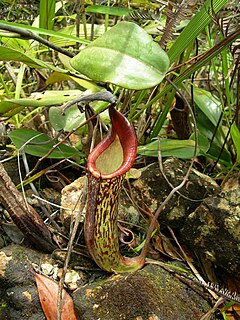 Nepenthes fusca, or the dusky pitcher-plant, is a tropical pitcher plant endemic to Borneo. It is found throughout a wide altitudinal range and is almost always epiphytic in nature, primarily growing in mossy forest. 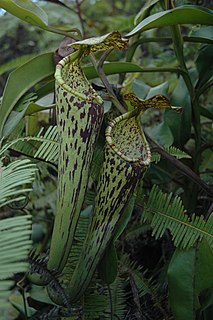 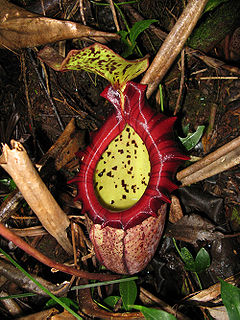 Nepenthes × alisaputrana, or the leopard pitcher-plant, is a hybrid of two well-known Nepenthes pitcher plant species: N. burbidgeae and N. rajah. The plant is confined to Mount Kinabalu in Sabah, Borneo.

Dr. Charles M. Clarke is an ecologist and botanist specialising in the carnivorous plant genus Nepenthes, for which he is regarded as a World Authority. Clarke has an honours degree in Botany from Monash University in Melbourne, and a Ph.D. in Ecosystem management at the University of New England, in Armidale, New South Wales.

Culex rajah is a species of mosquito in the genus Culex. It is endemic to Sabah, Malaysian Borneo. C. rajah is placed in the subgenus Culiciomyia. In its larval stage, C. rajah is found exclusively in the pitchers of Nepenthes rajah, a species of pitcher plant. As such, it is considered a nepenthebiont.

Toxorhynchites rajah is a species of mosquito in the genus Toxorhynchites. It is endemic to Sabah, Malaysian Borneo. In its larval stage, T. rajah is found exclusively in the pitchers of Nepenthes rajah, a species of pitcher plant. As such, it is considered a nepenthebiont.

Nepenthesinfauna are the organisms that inhabit the pitchers of Nepenthes plants. These include fly and midge larvae, spiders, mites, ants, and even a species of crab, Geosesarma malayanum. The most common and conspicuous predators found in pitchers are mosquito larvae, which consume large numbers of other larvae during their development. Many of these animals are so specialised that they cannot survive anywhere else, and are referred to as nepenthebionts.

Culex jenseni is a species of mosquito in the genus Culex. It is endemic to Sabah, Malaysian Borneo. C. jenseni is placed in the subgenus Lophoceraomyia. In its larval stage, C. jenseni develops in the pitchers of Nepenthes species, especially N. rajah. As such, it is considered a nepenthebiont.

Uranotaenia moultoni is a species of mosquito in the genus Uranotaenia. It is endemic to Sabah, Malaysian Borneo. U. moultoni is placed in the subgenus Pseudoficalbia. In its larval stage, U. moultoni develops in the pitchers of Nepenthes species. As such, it is considered a nepenthebiont. 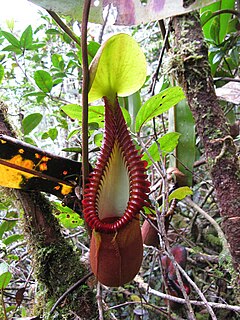 Nepenthes macrophylla, the large-leaved pitcher-plant, is a tropical pitcher plant known only from a very restrictive elevation on Mount Trusmadi in Sabah, Malaysian Borneo.

Nepenthes hurrelliana is a tropical pitcher plant endemic to Borneo, where it has been recorded from northern Sarawak, southwestern Sabah, and Brunei. It is of putative hybrid origin; its two original parent species are thought to be N. fusca and N. veitchii. A thick indumentum of rusty-brown hairs covers the entire plant, a characteristic presumably inherited from the latter.

Nepenthes × trusmadiensis, or the Trus Madi Pitcher-Plant, is a natural hybrid of two famous Bornean pitcher plant species: N. lowii and N. macrophylla. It is restricted to Mount Trus Madi, where both of its parent species are sympatric.

Nepenthes of Borneo is a monograph by Charles Clarke on the tropical pitcher plants of Borneo. It was first published in 1997 by Natural History Publications (Borneo), and reprinted in 2006. Clarke describes it as "primarily an ecological monograph".

Nepenthes of Mount Kinabalu is a monograph by Shigeo Kurata on the tropical pitcher plants of Mount Kinabalu and the surrounding area of Kinabalu National Park in Sabah, Borneo. It was published in 1976 by Sabah National Parks Trustees as the second booklet of the Sabah National Parks series. The monograph is Kurata's most important work on Nepenthes and significantly contributed to popular interest in these plants. It is noted for its high quality colour photographs of plants in habitat. In the book's preface, Kurata writes:

While Nepenthes were often enumerated as an important component of the flora of this mountain, a book on this genus—relating exclusively to Kinabalu had never been published to this date. With such a situation and the interest shown by visitors to the Kinabalu National Park in the genus, Mr. D.V. Jenkins, Assistant Director, Sabah National Parks was prompted to publish a guide book on the species found within the park and I was delighted to be asked to write the text.