Tripura is a 2015 Telugu horror-action film directed by Raj Kiran, starring Swathi Reddy and Naveen Chandra in the lead roles [1] and produced by A Chinna Babu and M Rajasekhar. Kamran composed the film's soundtrack. Upon release, the film received positive reviews. This Movie Also dubbed in Hindi & Tamil by The Same Title By Zee Cinema & Zee Thirai .

Tripura is a story about the village background. Tripura (Swathi Reddy) is a village girl who has weird dreams, and all those dreams come true. Tripura is taken to Hyderabad for her treatment about the dreams. There she meets a doctor, (Naveen Chandra), and they both fall in love and get married. They soon move into a big penthouse. Soon Tripura notices paranormal activities. The doctor's friend goes missing. As time passes, Tripura continues to get these dreams, until one day where she sees herself killing her husband with a knife. Naveen's friend, a police officer(Tilak Shekar) is intending to search for his and Naveen's friend. When the police officer tells Tripura that Naveen killed their friend and that he will kill her also. When Naveen reached home, he saw that Tripura was nowhere to be found. When he saw her, Tripura stabbed him. By the time the police officer had come at their house. Naveen tells Tripura that he did not kill her, but the police officer had killed their friend. So when he tries to kill both of them, the ghost of the friend arrives and kills the police officer. Then the screen cuts black.

Maayajaalam is a 2006 Indian Telugu film directed by S. V. Krishna Reddy and starring Srikanth and Poonam Kaur. Later this film was dubbed into Hindi as Naya Shoorveer. 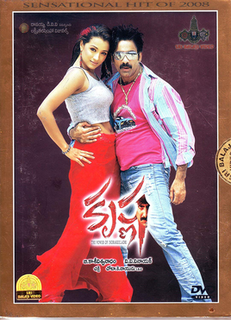 Krishna is a 2008 Indian Telugu-language action comedy film starring Ravi Teja and Trisha. The film is directed by V. V. Vinayak, cinematography by Chota K. Naidu and produced by B. Kasi Viswanatham. The film released on 11 January 2008, during the Sankranthi festival. The film was blockbuster at the box office and second highest-grossing Telugu film of 2008 after Jalsa. It was dubbed into Tamil as Madhura Thmiru. It was remade in Bengali as Awara, starring Jeet and Sayantika Banerjee and in Kannada as Rajani with Upendra and also in Bangladeshi Bangla as Prem Prem Paglaami (2013) starring Bappy Chowdhury and Achol. In 2013 movie was dubbed in Hindi under the title Krishna: The Power of Earth. And It Was Dubbed In Bhojpuri As Krishna The Great. This film has brought some fame to the noted Tamil actor Kadhal Dhandapani in Telugu. 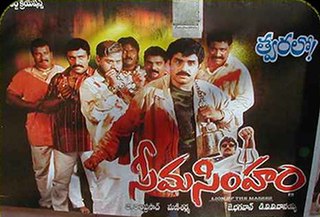 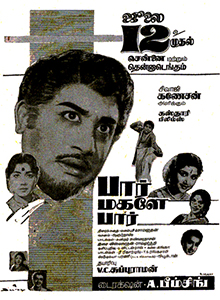 Paar Magaley Paar is a 1963 Indian Tamil-language directed by A. Bhimsingh and written by Valampuri Somanathan. Based on the play Petral Thaan Pillaiya by Pattu, it stars Sivaji Ganesan, M. R. Radha, Sowcar Janaki and C. R. Vijayakumari. The film, produced by V. C. Subburaman, had musical score by Viswanathan–Ramamoorthy and was released on 12 July 1963. 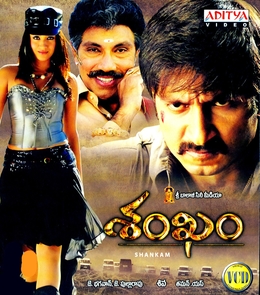 Annadammula Anubandham is 1975 Indian Telugu-language masala film, produced by the famous veteran makeup man M. Peethambaram under the Gaja Lakshmi Chitra banner and directed by S. D. Lal. It stars N. T. Rama Rao, Murali Mohan, Nandamuri Balakrishna and Latha, with music composed by Chakravarthy. The film is a remake of the Hindi movie Yaadon Ki Baaraat (1973). The film was recorded as a Super Hit at the box office. 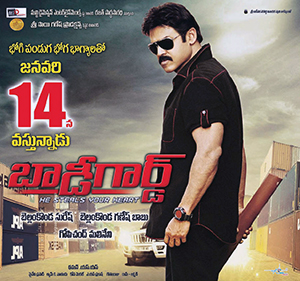 Bodyguard is a 2012 Indian Telugu-language romantic comedy action film produced by Bellamkonda Suresh under the Sri Sai Ganesh Productions banner and directed by Gopichand Malineni. The film stars Venkatesh and Trisha, with music composed by S. Thaman. It is a remake of the 2010 Malayalam film of the same name. 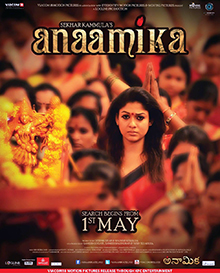 Anaamika is a 2014 Indian drama thriller film directed by Sekhar Kammula, starring Nayanthara in the titular role, alongside Vaibhav Reddy, Pasupathy, and Harshvardhan Rane. A remake of the Hindi film Kahaani, the film was simultaneously shot in Telugu and Tamil, the latter titled Nee Enge En Anbe.

Fitting Master is a 2009 Indian Telugu-language action film directed by E. V. V. Satyanarayana, featuring his son Allari Naresh in the lead titular role of Fitting Master, along with Madalsa Sharma, Sayaji Shinde, Chandra Mohan, Ali, Srinivasa Reddy and Amit Tiwari in the lead roles. The film released on 14 January 2009, along with getting mixed reviews from critics. The film was able to do well and was an Average at the box office. 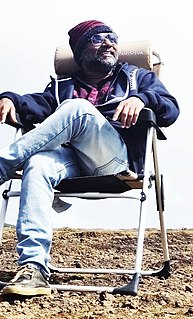 Chinna Babu Arigela, known as Chinna, is an Indian film producer who works primarily in Telugu cinema. He has also dubbed and produced Tamil remakes in Telugu like Ajith Kumar's Asal as Soolam, Vijay Antony's Naan as Nakili, and Prithviraj's Malayalam hit movie Anwar with the same title.

Sankoch (transl. Hesitation) is a 1976 Indian Hindi-language drama film, produced by R. K. Soral on Suyog Films banner and directed by Anil Ganguly. Starring Jeetendra, Sulakshana Pandit and music composed by Kalyanji–Anandji. The movie is based on the novel Parineeta by Sarat Chandra Chattopadhyay. 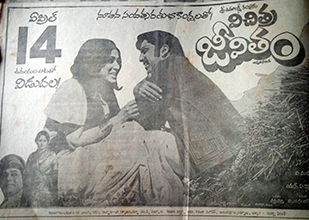 Vichitra Jeevitham is a 1978 Indian Telugu-language drama film, produced by Nidamarthi Padmakshi and N. Pushpa Bhatt and directed by V. Madhusudhan Rao. It stars Akkineni Nageswara Rao, Vanisri and Jayasudha, with music composed by Chakravarthy. The film is a remake of the Hindi movie Daag (1973), which itself is based on Thomas Hardy's 1886 novel The Mayor of Casterbridge.

Andaman Ammayi is a 1979 Telugu-language drama film, produced by T. Govindarajan under the Venus Combines banner and directed by V. Madhusudhan Rao. It stars Akkineni Nageswara Rao, Vanisri and music composed by K. V. Mahadevan. The film is a remake of the Tamil film Andaman Kadhali (1978). 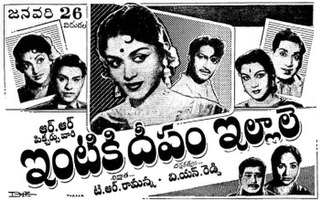 Intiki Deepam Illale is a 1961 Indian Telugu-language romance film, produced by T. R. Ramanna and directed by V. N. Reddy. It stars N. T. Rama Rao, B. Saroja Devi and Jaggayya, with music composed by Viswanathan–Ramamoorthy. The film was simultaneously made in Tamil as Manapanthal (1961); both versions were based on the American film Sabrina (1954).

Oh! Baby is a 2019 Indian Telugu-language fantasy comedy film directed by B. V. Nandini Reddy. The film stars Samantha Akkineni and Lakshmi. A remake of the 2014 South Korean film Miss Granny, the plot follows a woman in her 70s (Lakshmi) who magically finds herself in the body of her 24-year-old self (Samantha) after having her picture taken at a mysterious photo studio. Naga Shaurya, Rajendra Prasad, Rao Ramesh, Sajja Teja, Pragathi, and Urvashi play supporting roles. The music was composed by Mickey J. Meyer. 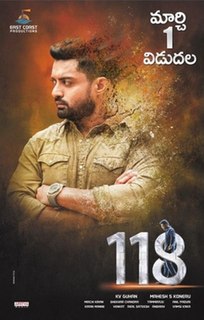 118 is a 2019 Indian Telugu-language action thriller film written and directed by cinematographer turned film director K. V. Guhan in his Tollywood directorial debut. The film features Kalyan Ram, Shalini Pandey and Nivetha Thomas in the lead roles. The music for the film is composed by Shekar Chandra, and the film is produced by Mahesh S. Koneru under the production company East Coast Production. The film follows an investigative journalist who finds himself threatened after he tries to decode a recurring nightmare involving a woman's death.

Evaru (transl. Who) is an Indian Telugu-language crime thriller film directed by Venkat Ramji. The film was produced by Pearl V. Potluri, Param V. Potluri and Kavin Anne. The film starring Adivi Sesh, Regina Cassandra, Naveen Chandra and Murali Sharma follows the story of corrupt cop Vikram Vasudev as he investigates a seemingly open-and-shut case of a woman killing her rapist. The music is composed by Sricharan Pakala and editing by Garry BH. The film was released on 15 August 2019. The film is an official Telugu-language adaptation of the Spanish film The Invisible Guest by Oriol Paulo. 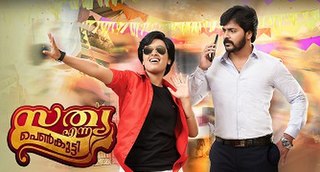 Sathya Enna Penkutty is an Indian Malayalam language television drama that airs on Zee Keralam and streams on ZEE5 before TV telecast. It stars Srinish Aravind and Mersheena Neenu in lead roles. It is an official remake of Zee Sarthak series Sindura Bindu aired from 2015 to 2020. The series premiered on 18 November 2019 and it aired its last episode on 17 April 2021. 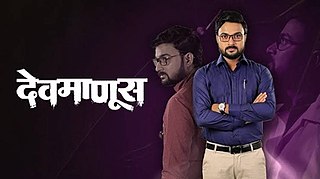 Devmanus is an Indian Marathi language crime thriller television series. The show premiered on 31 August 2020 and airs Monday to Saturday at 10:30 pm on Zee Marathi and also digitally available on ZEE5.