Born and raised in Atlanta, Georgia, Smith came from a middle-class background. [1] Various years are given for her birth including 1885, [1] 1888, [2] and 1895. [3] She attended Selma University, in Alabama, before moving to New York City at the age of twenty around 1915. [4] Soon after, she began working in a number of different cafés and theaters in Harlem and Philadelphia. [5]

She began her career as a vaudeville and minstrel entertainer who performed as a comedian, dancer, actress, and singer in traveling shows. Between 1916 and the early 1920s, she worked in minstrel shows and toured as a featured singer. She performed on Broadway using the name Bessie Lee and recorded for Silvertone. [6] She also worked on the Theater Owners Bookers Association vaudeville circuit before making her first recordings for Black Swan Records in 1922, [7] among which was "My Man Rocks Me (With One Steady Roll)" (1922), [8] written by J. Berni Barbour, of historical interest as the first record to refer to "rocking" and "rolling" in a secular context. [9] Her record inspired various lyrical elaborations, such as "Rock That Thing" by Lil Johnson and "Rock Me Mama" by Ikey Robinson.

Also in 1922, billed as the "southern nightingale," Smith won first place and a silver cup in a blues singing contest in which she sang her own composition, "Trixie's Blues", [10] competing against Alice Leslie Carter, Daisy Martin and Lucille Hegamin, at the Inter-Manhattan Casino in New York, sponsored by the dancer Irene Castle. [11] She is best remembered for "Railroad Blues" (1925), [7] which features one of her most inspired vocal performances on record, and "The World Is Jazz Crazy and So Am I" (1925). Louis Armstrong played the cornet on both songs.

Smith was a polished performer, and her records include several outstanding examples of the blues, on which she is accompanied by artists such as James P. Johnson, and Freddie Keppard. [12] She recorded with Fletcher Henderson's Orchestra for Paramount Records in 1924 and 1925. By the late 1930s her formerly girlish voice became more full-bodied, and her performance style more direct and sexual. Later rhythm-and-blues and soul singers would adopt this approach. [6]

As her career as a blues singer waned, she sustained herself mostly by performing in cabaret revues and starring in musical revues such as New York Revue (1928) and Next Door Neighbors (1928) at the Lincoln Theater in Harlem. [13] She also appeared in Mae West's short-lived 1931 Broadway show, The Constant Sinner. Two years later, Smith was elevated to the stage of the Theatre Guild for its production of Louisiana. [14]

In 2017, her song "Jack I'm Mellow" was featured as the theme song for the comedy series, Disjointed .

Lucille Nelson Hegamin was an American singer and entertainer and an early African-American blues recording artist.

Clara Smith was an American classic female blues singer, billed as the "Queen of the Moaners", although she had a lighter and sweeter voice than many of her contemporaries. Clara Smith was not related to the singers Bessie Smith and Mamie Smith. 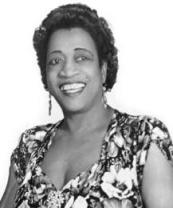 Ida Cox was an American singer and vaudeville performer, best known for her blues performances and recordings. She was billed as "The Uncrowned Queen of the Blues". 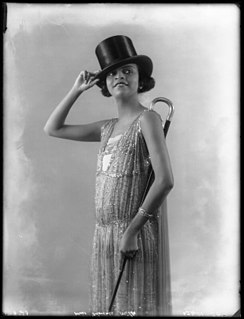 Florence Mills, billed as the "Queen of Happiness", was an American cabaret singer, dancer, and comedian.

Victoria Regina Spivey, sometimes known as Queen Victoria, was an American blues singer and songwriter. During a recording career that spanned 40 years, from 1926 to the mid-1960s, she worked with Louis Armstrong, King Oliver, Clarence Williams, Luis Russell, Lonnie Johnson, and Bob Dylan. She also performed in vaudeville and clubs, sometimes with her sister Addie "Sweet Peas" Spivey, also known as the Za Zu Girl. Among her compositions are "Black Snake Blues" (1926), "Dope Head Blues" (1927), and "Organ Grinder Blues" (1928). In 1962 she co-founded Spivey Records.

Bessie Brown (1890–1955) also known as "The Original" Bessie Brown, was an American classic female blues, jazz, and cabaret singer. She sometimes recorded under the pseudonyms Sadie Green, Caroline Lee, and possibly Helen Richards. Brown was active as a recording artist from 1925 to 1929.

Eva Taylor was an American blues singer and stage actress.

Classic female blues was an early form of blues music, popular in the 1920s. An amalgam of traditional folk blues and urban theater music, the style is also known as vaudeville blues. Classic blues were performed by female singers accompanied by pianists or small jazz ensembles and were the first blues to be recorded. Ma Rainey, Bessie Smith, Ethel Waters, and the other singers in this genre were instrumental in spreading the popularity of the blues.

Cora "Lovie" Austin was an American Chicago bandleader, session musician, composer, singer, and arranger during the 1920s classic blues era. She and Lil Hardin Armstrong are often ranked as two of the best female jazz blues piano players of the period. 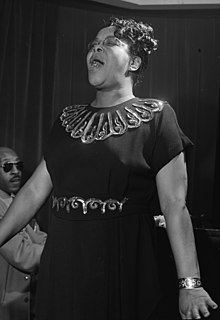 Bertha "Chippie" Hill, was an American blues and vaudeville singer and dancer, best known for her recordings with Louis Armstrong.

Marion Harris was an American popular singer who was most successful in the late 1910s and the 1920s. She was the first widely known white singer to sing jazz and blues songs.

Perry Bradford was an American composer, songwriter, and vaudeville performer. His most notable songs included "Crazy Blues," "That Thing Called Love," and "You Can't Keep A Good Man Down." He was nicknamed "Mule" because of his stubbornness, and he is credited with finally persuading Okeh Records to work with Mamie Smith leading to her historic blues recording in 1920. 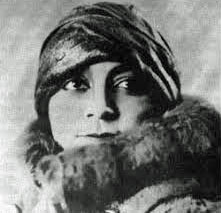 Lena Wilson was an American blues singer who performed in the classic female blues style. An African-American, Wilson performed in vaudeville with her brother Danny and his wife, Edith Wilson in the late 1910s and 1920s. Wilson made numerous recordings in the 1920s as a solo artist, for labels such as Black Swan, Paramount, Pathé, Victor, and Vocalion.

Edith Wilson was a blues singer, vaudeville performer, and actress from Louisville, Kentucky, US. An African-American who performed and recorded in the classic female blues style in the 1920s, Wilson worked in vaudeville and stage productions, first in Louisville and later throughout the US and abroad. From the 1930s onward, she acted in radio plays and television, and from 1948 to 1966 represented the Aunt Jemima brand for Quaker Oats in personal appearances and on television. She remained an active performer until 1980.

Viola McCoy was an American blues singer who performed in the classic female blues style during a career that lasted from the early 1920s to the late 1930s.

Maggie Jones was an American blues singer and pianist who recorded thirty-eight songs between 1923 and 1926. She was billed, alternately, as "The Texas Moaner" and "The Texas Nightingale". Among her best-remembered songs are "Single Woman's Blues", "Undertaker's Blues", and "Northbound Blues".

Esther Bigeou was an American vaudeville and blues singer. Billed as "The Girl with the Million Dollar Smile", she was one of the classic female blues singers popular in the 1920s.

Virginia Liston was an American classic female blues and jazz singer. She spent most of her career in vaudeville. She performed with her husband, Samuel H. Gray, as Liston and Liston. In the 1920s she made a series of recordings that included performances with Clarence Williams and his Blue Five on "You've Got the Right Key, but the Wrong Keyhole" and "Early in the Morning", and with the Clarence Williams Washboard Band on "Cushion Foot Stomp", and "P.D.Q. Blues".

Daisy Martin was an American actress and blues singer in the classic female blues style.

Aida Ward was an American jazz singer. Born in Washington, D.C., Ward rose to fame in the 1920s and 1930s in New York, on Broadway and at Harlem's Cotton Club. She appeared alongside Adelaide Hall and Bill "Bojangles" Robinson in the hit Broadway musical revue Blackbirds of 1928.