Trond Hans Farner Kverno (born 20 October 1945, in Oslo) is a contemporary Norwegian composer. He received degrees in church music, music theory and choir direction from the Norwegian Academy of Music. He is known for his liturgical compositions.

He also serves as an Auxiliary Bishop of the Christ Catholic Church International.

Church music has spearheaded major new developments in music in Norway throughout the post-war period, in terms of both musical innovation and institutional renewal. At the same time church music composers have enjoyed growing popularity among musicians and listeners alike. Trond H.F. Kverno has been an exponent of this tradition since the 1970s, and his compositions are today among the finest and most frequently performed in Norway. [1]

Trond H.F. Kverno was born in Oslo in 1945. He took his degree in church music from the Oslo Conservatory of Music in 1967. The following year he took a degree in music theory and choir direction. He was ordained deacon of music in 1975, and has served as an organist in a number of churches in Oslo and elsewhere. [2]

After beginning his teaching career at the Oslo Conservatory of Music in 1971, Trond H.F. Kverno transferred to the Norwegian State Academy of Music in 1973, the year of its founding, where he has been a prominent figure in the teaching of music theory. Since 1978 he has been senior lecturer in church music and composition theory. He has been particularly involved in the more creative, performance-oriented aspects of the latter, focusing on liturgical organ playing, improvisation and composition for use in church services. Since the introduction of a graduate programme in church music at the Academy in 1983, he has also taught within the fields of liturgiology and hymnody. In 1994 he was appointed professor in church music, with church music composition as his main subject. [3]

Trond H.F. Kverno has also gained national recognition in the latter field. He was a member of the liturgical commission (1976–78) appointed to reform the liturgical books of the Church of Norway. He has drawn on his experience from the commission in the fields of composition and practical liturgy in positions connected to the Oslo Cathedral and Gamle Aker Church, Oslo. Norsk Høymesse 1977 (The Norwegian Morning Service) includes several melodies composed by Kverno in its general series. [4]

The liturgical commission was also responsible for laying the groundwork for Norsk Salmebok (Norwegian Hymnal), written in 1983. Kverno finds it especially challenging to compose for gatherings with no particular musical expertise, and regards every melody which is included in a songbook or hymnal as a small triumph. In this respect he has a good deal to be proud of: Norsk Salmebok of 1983 includes 27 of his hymns, and his compositions are also to be found in hymnals in Sweden, Finland, Denmark and Germany.

Trond H.F. Kverno regards his career primarily in terms of his church music accomplishments. In his view, the concept "absolute music" is a rare occurrence, as most works are generally part of an ideological or aesthetic context. The individual work may also reflect the person who commissioned it, its users or its listeners. In Kverno's opinion, music performed in a church differs significantly from that played in a concert hall: "The performer is the entire congregation where everyone sings, or where some sing while others pray. The congregation is also an instrument. The music resounds through the faith of the universal church as a sacrifice to the Holy Trinity. The goal is the congregation's prayer, rather than aesthetic pleasure. The essential point is that the music hears us and interprets us before the throne of God, not that we hear the music. This is the fundamental assumption on which my work is based. I would liken my work to that of the painter of icons, where each icon is a window to a reality other than that which surrounds us." [5]

Henrik Hellstenius is a Norwegian composer and musicologist.

Egil Hovland was a Norwegian composer. 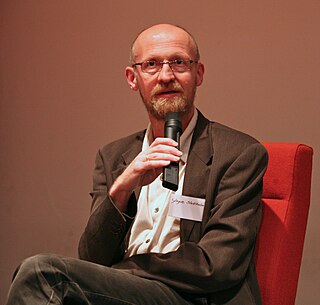 Yngve Slettholm is a Norwegian cultural executive, politician for the Christian Democratic Party and Salvationist. 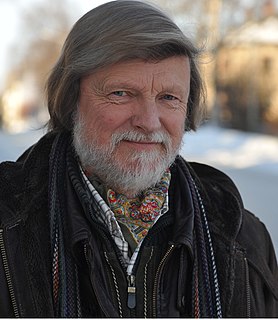 Pauline Margrete Hall was a Norwegian composer and music critic. She was the founding chairwoman of Ny Musikk (1938-1961) and served as president of the International Society for Contemporary Music (1952–53).

Peter Hognestad was a Norwegian Lutheran bishop, theologian, writer, and translator. Hognestad was from Jæren in Norway and he served as the Bishop of the Diocese of Bjørgvin from 1916 until his death in 1931.

Kjell Mørk Karlsen is a Norwegian composer and organist.

Kåre Kolberg was a Norwegian composer, organist and music critic.

Landstads reviderte salmebok was a hymnal authorized for public worship in Norway under the royal resolutions of October 9, 1920 and February 15, 1924. The book was the Church of Norway's official hymnal until 1985, together with Nynorsk salmebok.

Gustav Margerth Jensen was a Norwegian priest, hymnologist, hymnwriter, seminary instructor, and liturgist. He is best known for his liturgy revision and hymnal publication.

Landstads kirkesalmebog, often simply known as Landstads salmebok, was the most important hymnal for the Church of Norway from 1870 to 1926.

Kingo's hymnal, officially titled Dend Forordnede Ny Kirke-Psalme-Bog, is a hymnal that was approved by royal decree for use in all churches in Denmark–Norway in 1699. The contains 86 hymns by the bishop of Odense, Thomas Kingo. It also bears Kingo's name on the title page because the selection was made based on a hymnal that Kingo had edited ten years earlier.

Norsk salmebok 2013: for kirke og hjem is the hymnal of the Church of Norway. It is published by Eide Forlag and was adopted for use on the first Sunday of Advent in 2013.

Helge Iberg is a Norwegian contemporary composer. Iberg studied musicology, history of ideas and religious studies at the University of Oslo under the tutorship of composers Olav Anton Thommessen and Ragnar Søderlind.