Trond Mohn (born 3 April 1943) is a Norwegian billionaire businessman and philanthropist. [1] He is the owner and chief executive officer (CEO) of the family-owned company Frank Mohn AS.

He returned to Bergen to work for the family company, and became CEO in January 1986. He is the Honorary Consul for the Republic of Korea in Norway.

Mohn has made numerous donations for sports, medicine and research, primarily in Bergen but also in Tromsø and Haugesund/Karmøy. He is widely admired in Bergen for his generosity; in 2010 he was voted as "the Best Bergenser" ('Bergenser' being a colloquial term for a citizen of Bergen), the first time such a vote was arranged. [3]

Mohn is married to Mette Mortmansgård and they have three children: Christine Mohn, Louise Mohn and Fredrik Wilhelm Mohn. [6] They live in Bergen, where his business is based. [7]

Ole Martin Årst is a Norwegian retired professional footballer who played as a forward. He is a former top scorer in both Belgium's and Norway's top leagues.

Framo AS marketed under the brand name Framo is a supplier of submerged cargo pumps to the tanker market. The company was founded in 1938 and is located outside Bergen, Norway. The portfolio of products include submerged cargo pumps, transportable pumping systems, oil-recovery equipment, anti-heeling systems and offshore pumping systems. All of their products are manufactured in Norway.

Stord Sunnhordland Fotballklubb was an association football club located in Leirvik, Stord, Norway. It was founded in late 2002 as a cooperation between the football sections of Leirvik's local multi-sports club Stord IL and lower-division Moster IL. The club was named Stord/Moster FK until 2006. Two investors, football agent Terje Simonsen and professional footballer Kjetil Løvvik, were behind the merger. It was founded to create one large club in the Sunnhordland region, to attract support behind the club. Critics claimed that the investors were mainly looking to develop players to sell for cash. Top goalscorer the first season was Kjetil Løvvik himself, who quit a professional career to play for the club. Stord/Moster fared well on the football field; they won their Third Division group twice in a row, and on the second occasion they gained promotion through playoff. They then played two seasons in the Second Division. Their biggest talent was Christian Brink who went on to higher levels of football.

Vildanden AS was a virtual, regional airline based at Skien Airport, Geiteryggen in Norway, where it was the only airline. With operations starting in 2005, it flew to Bergen, Trondheim and Stavanger using a Jetstream 32 and an ATR 42, which is wet leased from Danish Air Transport (DAT) and Helitrans. Previously, the airline has also served Stockholm and Molde, and has also operated Saab 340 aircraft, operated by Coast Air, Air Aurora and Avitrans. The airline had been in conflict with Coast Air about terminating the wet lease agreement. The company has had to be bailed out several times, including by the municipality, until it managed to make its first profit in 2009. It ceased operations and filed for bankruptcy in January 2011.

Stiftelsen Norsk Luftambulanse is a Norwegian humanitarian organisation, organised as a non-profit foundation. It primarily promotes and operates helicopter air ambulance services. As of 2014, they operate seven Eurocopter EC135 and one EC145 helicopters out of seven bases in Norway, based on contracts with the state through the Norwegian Air Ambulance. In Denmark, they operate three EC135 out of three bases.

Green Warriors of Norway is a Norwegian environmental NGO based in Bergen, Norway. The organization also has offices in Oslo and Tromsø.

Kongsberg Spacetec AS or KSPT, prior to 1994 Spacetec A/S, is a supplier of ground stations based in Tromsø, Norway. It is owned by the Kongsberg Group and is part of its Kongsberg Defence & Aerospace division. The company is co-located with Kongsberg Satellite Services (KSAT) and Tromsø Satellite Station (TSS).

Braathens Helikopter A/S was a Norwegian helicopter airline based at Stavanger Airport and Bergen Airport. It used a fleet of seven Aérospatiale Super Pumas to serve offshore oil platforms in the North Sea. The customers were Amoco, BP, Norsk Hydro, Phillips Petroleum and Statoil, serving their oil fields Ekofisk, Oseberg, Gullfaks, Veslefrikk, Valhall, Ula and Gyda. Braathens Helikopter operated from 1989 to 1993, after which it was sold to and merged with the main competitor, Helikopter Service. Braathens Helikopter was owned by Ludvig G. Braathens Rederi and was a sister company of the airline Braathens SAFE.

Braathens South American & Far East Airtransport A/S or Braathens SAFE was founded by ship-owner Ludvig G. Braathen in 1946. It started as a charter airline based at Oslo Airport, Gardermoen in Norway, flying to destinations in the Far East and in South America. At first the airline used Douglas DC-4s, and later also Douglas DC-3s. In 1948, the airline moved to Oslo Airport, Fornebu and started regular scheduled flights to the Far East. In 1952, the airline started cooperation with the Icelandic airline Loftleidir, where until 1960 the two airlines in cooperation flew flights to Reykjavík. Domestic services started in 1951, using de Havilland Herons on a route from Oslo to Stavanger via Tønsberg. Braathens SAFE also established at Stavanger Airport, Sola. A second route was started two years later to Trondheim. The Heron routes also stopped in Farsund, Kristiansand, Notodden to Stavanger and Hamar, Røros to Trondheim. 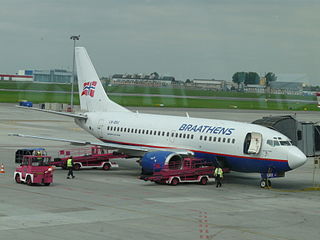 Braathens SAFE's domestic market was deregulated on 1 April 1994. Since then, any airline within the European Economic Area is free to operate any domestic or international route. Braathens rejected a proposal from the main competitor Scandinavian Airlines System (SAS) for a merger; instead the helicopter division was sold and the company listed on the Oslo Stock Exchange. New routes were opened from Oslo Airport, Fornebu to Bodø, Harstad/Narvik and Tromsø, but the routes from Bergen to these cities were terminated. International routes to Rome, Nice and Jersey were introduced. In 1996, Braathens SAFE bought Sweden's second-largest airline, Transwede, and started flying on the Oslo–Stockholm route. The following year, Transwede, with its five domestic routes, was merged into Braathens SAFE. The same year, KLM bought 30% of Braathens SAFE and the airlines started a partnership.

Daniel Andreas Skjeldam is a Norwegian business leader and the current chief executive officer of Hurtigruten.

Oslo 2022 Winter Olympics was a campaign by the private organization Norwegian Olympic and Paralympic Committee and Confederation of Sports for the right to host the 2022 Winter Olympics in Oslo, although in Norway it was primarily viewed as an application by the Olympic movement for government funding of an Olympic Games that would ultimately be decided by the Norwegian Parliament. The Olympic organisations had already indicated a desire that Norway would host the games and provide the necessary funding, and Oslo was described as the clear favourite to host the games in international media, provided that the Norwegian Parliament granted the necessary funding. This bid was cancelled on October 1, 2014, after the parliamentary caucus of the Conservative Party had voted to decline the application for funding. Already, the Progress Party, Centre Party and Socialist Left Party were opposed to the bid. Thus, it was no longer possible to get a parliamentary majority for a state guarantee. The IOC selected Beijing as the host city for the 2022 Winter Olympics from the two remaining bids at the 128th IOC Session in Kuala Lumpur, Malaysia on July 31, 2015.

Bodil Holst is a Danish-Norwegian physicist known for her work on nanoscale imaging, material characterisation and mask based lithography using molecular beams. Other research areas include smart surfaces and plant fibre identification. She is a professor in the department of physics and technology at the University of Bergen in Norway.