Gestational trophoblastic neoplasia (GTN) is group of rare diseases related to pregnancy and included in gestational trophoblastic disease (GTD) in which abnormal trophoblast cells grow in the uterus. [1] GTN can be classified into benign and malignant lesions. Benign lesions include placental site nodule and hydatidiform moles while malignant lesions have [2] four subtypes including invasive mole, gestational choriocarcinoma, placental site trophoblastic tumor (PSTT) and epithelioid trophoblastic tumor (ETT). [3] The choriocarcinoma has 2 significant subtypes including gestational and non-gestational and they are differentiated by their different biological feature and prognosis. [4] Signs and symptoms of GTN will appear vary from person to person and depending upon the type of the disease. They may include uterine bleeding not related to menstruation, pain or pressure in pelvis, large uterus and high blood pressure during pregnancy. The cause of this disease is unknown but the identification of the tumor based on total beta-human chorionic gonadotropin (β-hCG) in the serum.

Management of GTN requires pathology review, treatment options and monitoring of hCG. Therefore, it can be treated with curettage, hysterectomy and single agent or multi agent chemotherapy. [4] Although this group of diseases are highly susceptible to chemotherapy, prognosis depends on the type of GTN and whether the tumor has spread to other areas of the body. [5]

Cause and Risk factors

The exact cause of gestational trophoblastic neoplasia (GTN) is unknown. GTN often arises after molar pregnancies but can also occur after any gestation including miscarriages and term pregnancies. [6] Although risk factors may impact on the development of the tumor, most do not directly cause of disease. According to the some studies, the risk of complete molar pregnancy is highest in women over age 35 and younger than 20. The risk is even higher for women over age 45. [7] [8]

The symptoms of GTN will vary from person to person. People with the same disease may not have all the symptoms listed.

Initial screening tests for GTN include:

Stage I - Disease confined to the uterus

Stage II - GTN extends outside of the uterus, but is limited to the genital structures (adnexa, vagina, broad ligament)

Stage III - GTN extends to the lungs, with or without known genital tract involvement

Stage IV - All other metastatic sites [15]

Several treatment methods are available for GTN that include surgery, chemotherapy or combination of these. Surgery treatment is most common initial method for some types of the disease but it depends on the stage of the tumor. Common surgical options include dilation and curettage, and hysterectomy.

FIGO modified Prognostic Scoring System. The system evaluates the patients to those with GTN as low-risk and high-risk based on several risk factors such as age, pregnancy or interval of pregnancies, size or metastases of tumor and prior chemotherapy. Each risk factors are rated at levels 0-4 scores. The numbers are then added up, and the overall score determines a woman's risk level.

Therefore, some studies have shown that the condition is harder to cure if the cancer has spread to the liver or brain or β-hCG level is higher than 40,000 mIU/mL when treatment begins, cancer returns after having chemotherapy or symptoms/ pregnancy occurred for more than 4 months before treatment. [18]

According to studies, GTN is found more frequently in Asia compared to North America or Europe. [16] As of 2020, the reported incidence of choriocarcinoma ranges from 1 in 40 000 pregnancies in North America and Europe, to 9.2 and 3.3 per 40 000 pregnancies in Southeast Asia and Japan, respectively. Epidemiological studies have reported that hydatidiform mole appears to be caused by abnormal gametogenesis and fertilization more frequent at the extremes of reproductive age of younger than 15 and older than 45 years of age and pregnancies at these ages are a risk factor for hydatidiform mole. The risk increases after age 35 and there is a 5–10 times increased risk after 45 years. [19]

Recently, in order to provide more comprehension tools of GTN pathogenesis, epigenetic modifications and molecular biology techniques could be applied for proper diagnosis, management, and treatment of such neoplasia. The progression of anti-angiogenesis therapy and molecular targeted cancer therapies would be capable of improving the therapeutic perspective among patients with drug resistance. [20] Although chemotherapy and hysterectomy are currently used in a clinical setting, the use of diverse treatments including anti-body and gene therapy also being attempted to cure GTN. In addition, gene delivery tools using genetically engineered neural stem cells are presently being examined for the treatment of GTN and previous studies have indicated a significant inhibitory effect on tumor growth. [21] 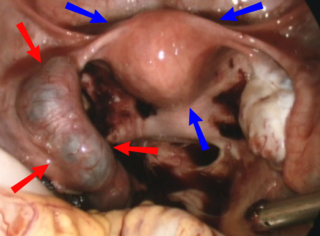 Ectopic pregnancy is a complication of pregnancy in which the embryo attaches outside the uterus. Signs and symptoms classically include abdominal pain and vaginal bleeding, but fewer than 50 percent of affected women have both of these symptoms. The pain may be described as sharp, dull, or crampy. Pain may also spread to the shoulder if bleeding into the abdomen has occurred. Severe bleeding may result in a fast heart rate, fainting, or shock. With very rare exceptions the fetus is unable to survive.

Human chorionic gonadotropin (hCG) is a hormone for the maternal recognition of pregnancy produced by trophoblast cells that are surrounding a growing embryo, which eventually forms the placenta after implantation. The presence of hCG is detected in some pregnancy tests. Some cancerous tumors produce this hormone; therefore, elevated levels measured when the patient is not pregnant may lead to a cancer diagnosis and, if high enough, paraneoplastic syndromes, however, it is not known whether this production is a contributing cause, or an effect of carcinogenesis. The pituitary analog of hCG, known as luteinizing hormone (LH), is produced in the pituitary gland of males and females of all ages.

Ovarian cancer is a cancer that forms in or on an ovary. It results in abnormal cells that have the ability to invade or spread to other parts of the body. When this process begins, there may be no or only vague symptoms. Symptoms become more noticeable as the cancer progresses. These symptoms may include bloating, pelvic pain, abdominal swelling, constipation, and loss of appetite, among others. Common areas to which the cancer may spread include the lining of the abdomen, lymph nodes, lungs, and liver. 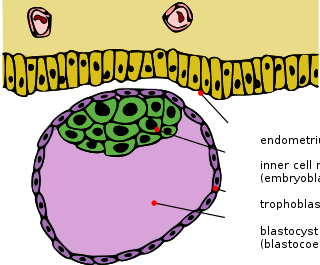 Trophoblasts are cells that form the outer layer of a blastocyst. They are present four days post-fertilization in humans. They provide nutrients to the embryo and develop into a large part of the placenta. They form during the first stage of pregnancy and are the first cells to differentiate from the fertilized egg to become extraembryonic structures and do not directly contribute to the embryo. After gastrulation, the trophoblast is contiguous with the ectoderm of the embryo and is referred to as the trophectoderm. After the first differentiation, the cells in the human embryo lose their totipotency and are no longer totipotent stem cells because they cannot form a trophoblast. They are now pluripotent stem cells.

Molar pregnancy is an abnormal form of pregnancy in which a non-viable fertilized egg implants in the uterus and will fail to come to term. A molar pregnancy is a gestational trophoblastic disease which grows into a mass in the uterus that has swollen chorionic villi. These villi grow in clusters that resemble grapes. A molar pregnancy can develop when a fertilized egg does not contain an original maternal nucleus. The products of conception may or may not contain fetal tissue. It is characterized by the presence of a hydatidiform mole. Molar pregnancies are categorized as partial moles or complete moles, with the word mole being used to denote simply a clump of growing tissue, or a growth.

Choriocarcinoma is a malignant, trophoblastic cancer, usually of the placenta. It is characterized by early hematogenous spread to the lungs. It belongs to the malignant end of the spectrum in gestational trophoblastic disease (GTD). It is also classified as a germ cell tumor and may arise in the testis or ovary.

Germ cell tumor (GCT) is a neoplasm derived from germ cells. Germ-cell tumors can be cancerous or benign. Germ cells normally occur inside the gonads. GCTs that originate outside the gonads may be birth defects resulting from errors during development of the embryo.

Placental abruption is when the placenta separates early from the uterus, in other words separates before childbirth. It occurs most commonly around 25 weeks of pregnancy. Symptoms may include vaginal bleeding, lower abdominal pain, and dangerously low blood pressure. Complications for the mother can include disseminated intravascular coagulopathy and kidney failure. Complications for the baby can include fetal distress, low birthweight, preterm delivery, and stillbirth. 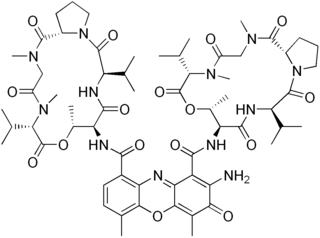 Dactinomycin, also known as actinomycin D, is a chemotherapy medication used to treat a number of types of cancer. This includes Wilms tumor, rhabdomyosarcoma, Ewing's sarcoma, trophoblastic neoplasm, testicular cancer, and certain types of ovarian cancer. It is given by injection into a vein.

"Cytotrophoblast" is the name given to both the inner layer of the trophoblast or the cells that there live. It is interior to the syncytiotrophoblast and external to the wall of the blastocyst in a developing embryo. 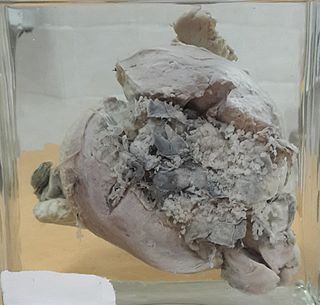 Invasive hydatidiform mole, is a type of neoplasia that grows into the muscular wall of the uterus. It is formed after conception. It may spread to other parts of the body, such as the vagina, vulva, and lung.

A placental disease is any disease, disorder, or pathology of the placenta. 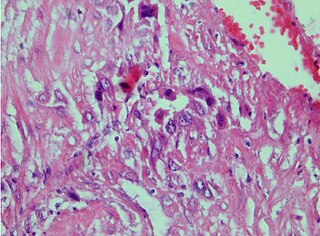 Min Chiu Li was a Chinese-American oncologist and cancer researcher. Li was the first scientist to use chemotherapy to cure widely metastatic, malignant cancer.

Early pregnancy bleeding refers to vaginal bleeding before 24 weeks of gestational age. If the bleeding is significant, hemorrhagic shock may occur. Concern for shock is increased in those who have loss of consciousness, chest pain, shortness of breath, or shoulder pain.

An Extracranial Germ-Cell Tumor (EGCT) occurs in the abnormal growth of germ cells in the gonads and the areas other than the brain via tissue, lymphatic system, or circulatory system. The tumor can be benign or malignant (cancerous) by its growth rate. According to the National Cancer Institute and St. Jude Children's Research Hospital, the chance of children who are under 15 years old having EGCTs is 3%, in comparison to adolescents, a possibility of 14% with aged 15 to 19 can have EGCTs. There is no obvious cut point in between children and adolescents. However, common cut points in researches are 11 years old and 15 years old.