Tropidocoleus bicarinatus is a species of beetle in the family Cerambycidae, the only species in the genus Tropidocoleus. [1] 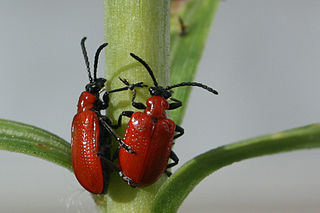 The insects of the beetle family Chrysomelidae are commonly known as leaf beetles, and include over 37,000 species in more than 2,500 genera, making up one of the largest and most commonly encountered of all beetle families. Numerous subfamilies are recognized, but only some of them are listed below. The precise taxonomy and systematics are likely to change with ongoing research.

Powderpost beetles are a group of seventy species of woodboring beetles classified in the insect subfamily Lyctinae. These beetles, along with spider beetles, death watch beetles, common furniture beetles, skin beetles, and others, make up the superfamily Bostrichoidea. While most woodborers have a large prothorax, powderpost beetles do not, making their heads more visible. In addition to this, their antennae have two-jointed clubs. They are considered pests and attack deciduous trees, over time reducing the wood to a powdery dust. The damage caused by longhorn beetles is often confused with that of powderpost beetles, but the two groups are unrelated. The larvae of the Cerambycidae are white, straight and generally flat-headed, whereas those of the Bostrichidae are white and C-shaped.

Chahuis or xamoes are the common names given in Mexico to a variety of edible beetles within the insect order Coleoptera. The insects' common names in English are often "sticks worms", "rhinoceros beetle," or "grub".

Acmaeopsoides rufula is a species of beetle in the family Cerambycidae, and the only species in the genus Acmaeopsoides. This beetle is distributed in Canada, and United States. 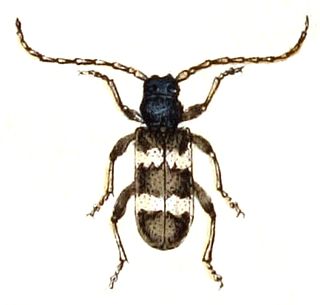 Callidium is a genus of beetles in the family Cerambycidae, containing the following species: