Last updated August 16, 2022
Suborder of beetles
Not to be confused with Polyphagia.
For the genus of Blattodea (cockroaches), see Polyphaga (genus).

Polyphaga is the largest and most diverse suborder of beetles. It comprises 144 families in 16 superfamilies, and displays an enormous variety of specialization and adaptation, with over 350,000 described species, or approximately 90% of the beetle species so far discovered.

Key characteristics of Polyphaga are that the hind coxa (base of the leg), does not divide the first and second abdominal/ventral plates which are known as sternites. Also, the notopleural suture (found under the pronotal shield) is not present. [1] Polyphaga are also essential secondary decomposers of their soil and natural aquatic environments. They digest harmful toxins and release useful nutrients into their surroundings, cultivating healthy bodies of water and soil. [2]

The name of polyphaga is derived from two Greek words: poly-, meaning 'many', and phagein, meaning 'to eat', so the suborder is called the “eaters of many things”.

The internal classification of Polyphaga involves several superfamilies or series, whose constituents are relatively stable, although some smaller families (whose rank even is disputed) are allocated to different clades by different authors. Large superfamilies include Hydrophiloidea, Staphylinoidea, Scarabaeoidea, Buprestoidea, Byrrhoidea, Elateroidea, and Bostrichoidea.

The infraorder Cucujiformia includes the vast majority of phytophagous (plant-eating) beetles, united by cryptonephric Malpighian tubules of the normal type, a cone ommatidium with open rhabdom, and lack of functional spiracles on the eighth abdominal segment. Constituent superfamilies of Cucujiformia are Cleroidea, Cucujoidea, Tenebrionoidea, Chrysomeloidea, and Curculionoidea. Evidently adoption of a phytophagous lifestyle correlates with taxon diversity in beetles, with Cucujiformia, especially weevils (Curculionoidea), forming a major radiation.

Beetles are insects that form the order Coleoptera, in the superorder Endopterygota. Their front pair of wings are hardened into wing-cases, elytra, distinguishing them from most other insects. The Coleoptera, with about 400,000 described species, is the largest of all orders, constituting almost 40% of described insects and 25% of all known animal life-forms; new species are discovered frequently, with estimates suggesting that there are between 0.9 to 2.1 million total species. Found in almost every habitat except the sea and the polar regions, they interact with their ecosystems in several ways: beetles often feed on plants and fungi, break down animal and plant debris, and eat other invertebrates. Some species are serious agricultural pests, such as the Colorado potato beetle, while others such as Coccinellidae eat aphids, scale insects, thrips, and other plant-sucking insects that damage crops.

Weevils, also referred to as nunus, are beetles belonging to the superfamily Curculionoidea, known for their elongated snouts. They are usually small, less than 6 mm in length, and herbivorous. Approximately 97,000 species of weevils are known. They belong to several families, with most of them in the family Curculionidae. Some other beetles, although not closely related, bear the name "weevil", such as the biscuit weevil, which belongs to the family Ptinidae.

The Adephaga, with more than 40,000 recorded species in 10 families, are a suborder of highly specialized beetles and the second-largest suborder of the order Coleoptera. Members of this suborder are collectively known as adephagans. The largest family is Carabidae which comprises most of the suborder with over 40,000 species. Adephaga also includes a variety of aquatic beetles, such as predaceous diving beetles and whirligig beetles. 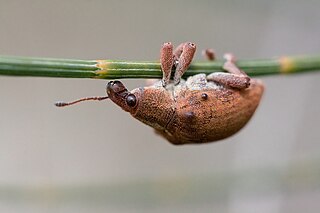 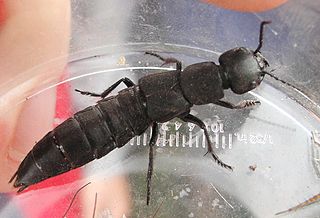 Staphyliniformia is a large infraorder of beetles. It contains over 70,000 described species from all regions of the world. Most species occur in moist habitats - various kinds of rotting plant debris, fungi, dung, carrion, many live in fresh water. 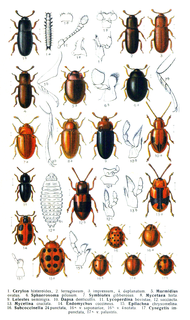 Cucujoidea is a superfamily of beetles. This group formerly included all of the families now included in the superfamily Coccinelloidea. They include some fungus beetles and a diversity of lineages of "bark beetles" unrelated to the "true" bark beetles (Scolytinae), which are weevils.

The Lymexylidae, also known as ship-timber beetles, are a family of wood-boring beetles. Lymexylidae belong to the suborder Polyphaga and are the sole member of the superfamily Lymexyloidea.

Staphylinoidea is a superfamily of beetles. It is a very large and diverse group with worldwide distribution.

Vadim Gennadyevich Gratshev was one of world leading experts in palaeoentomology. Vadim graduated from the Moscow State Pedagogical Institute in 1987 and taught biology at a high school for three years until 1989. Then he decided to pursue academic science and joined the Laboratory of Arthropods at the Paleontological Institute of Russian Academy of Sciences in 1991, first as a Kuperwood Fellow of the Academy of Natural Sciences, and since 1994 as a full-time researcher. Weevils and dryopoids were always his main passion, although his area of interests extended far beyond that. He produced over 20 scientific papers, including an outstanding comparative study of the hindwing venation of the superfamily Curculionoidea published in co-authorship with Vladimir Zherikhin. Being a keen field researcher, he participated in numerous expeditions to the Maritime Province and Sakhalin Island, Kuznetskii Alatau, Novosibirsk Region, Armenia, Azerbaijan, Georgia, Tajikistan, Turkmenia, and Ukraine. The material he collected on his trip to the Drakensberg and Zululand in 2005 inspired him to commence a new project on Afrotropical Elmidae and Anthribidae. Being an optimistic, cheerful multi-talented individual with subtle sense of humour, he did not restrict his interests to extinct and extant beetles. He was an expert in noble orchids, aquarium design and raising geckos, and published several papers on those topics. He was a skillful wood-carver, and his knowledge of Japanese history and literature was not amateur.

Histeroidea is a superfamily of beetles in the infraorder Staphyliniformia.

Stenotrachelidae, commonly called false longhorn beetles is a family of beetles, in the large suborder Polyphaga.

Ophryastes turbinatus is a species in the subfamily Entiminae, in the suborder Polyphaga . It is found in North America.

Europs pallipennis is a species in the family Monotomidae, in the suborder Polyphaga . It is found in North America.

Plateumaris neomexicana is a species in the subfamily Donaciinae, in the suborder Polyphaga . It is found in North America. 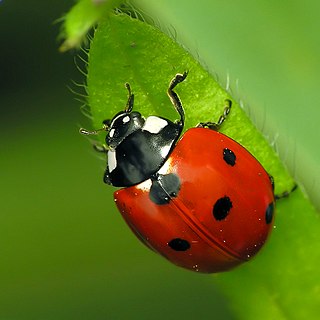 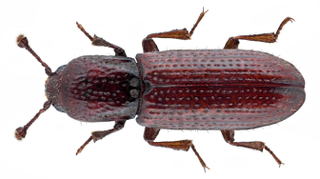 Teredidae is a family of beetles in the order Coleoptera, formerly included within the family Bothrideridae.

Photinus brimleyi is a species of firefly in the family Lampyridae. It is found in North America.

Phytophaga is a clade of beetles within the infraorder Cucujiformia consisting of the superfamilies Chrysomeloidea and Curculionoidea that are distinctive in the plant-feeding habit combined with the tarsi being pseudotetramerous or cryptopentamerous, where the fourth tarsal segment is typically greatly reduced or hidden by the third tarsal segment. The Cucujoidea are a sister to the Phytophaga. In some older literature the term Phytophaga was applied only to the Chrysomeloidea.

Euporus is a genus of beetles belonging to the large subfamily Cerambycinae in the family of longhorn beetles (Cerambycidae).

Wikispecies has information related to Polyphaga (Coleoptera) .
This page is based on this Wikipedia article
Text is available under the CC BY-SA 4.0 license; additional terms may apply.
Images, videos and audio are available under their respective licenses.