The Elateroidea are a large superfamily of beetles. It contains the familiar click beetles, fireflies, and soldier beetles and their relatives.

Certain clusters of families within the superfamily are more strongly related to one another; for example, the Elateridae have close ties to the Cerophytidae, Eucnemidae, and Throscidae, and some of these beetles can also "click".

Likewise, the Lampyridae are most closely related to the Phengodidae and Rhagophthalmidae; most members of these families are also bioluminescent, at least as larvae. This group of families also includes many taxa whose females are larviform, though this is also known from a few other families in the superfamily.

The validity and relationships of some families, such as Podabrocephalidae are not fully resolved. The family Rhinorhipidae has recently been removed to its own superfamily, with evidence that it is a basal taxon within Elateriformia dating to an Upper Triassic/Lower Jurassic split from other extant beetle lineages. [1]

Some recent morphological and molecular phylogenetic analyses find that Byrrhoidea is either a monophyletic or paraphyletic group closely related to Elateroidea. [2] 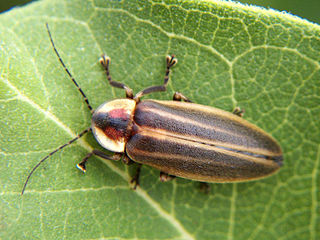 The Lampyridae are a family of insects in the beetle order Coleoptera with more than 2,000 described species. They are soft-bodied beetles that are commonly called fireflies, glowworms, or lightning bugs for their conspicuous use of bioluminescence during twilight to attract mates or prey. Fireflies produce a "cold light", with no infrared or ultraviolet frequencies. This chemically produced light from the lower abdomen may be yellow, green, or pale red, with wavelengths from 510 to 670 nanometers. Some species such as the dimly glowing "blue ghost" of the Eastern U.S. may seem to emit blueish-white light from a distance and in low light conditions, but their glow is bright green when observed up close. Their perceived blue tint may be due to the Purkinje effect. 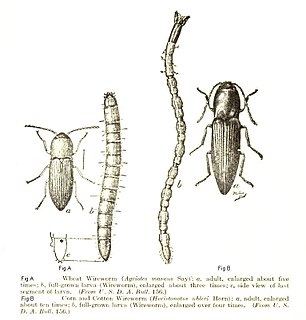 Elateridae or click beetles are family of beetles. Other names include elaters, snapping beetles, spring beetles or skipjacks. This family was defined by William Elford Leach (1790–1836) in 1815. They are a cosmopolitan beetle family characterized by the unusual click mechanism they possess. There are a few other families of Elateroidea in which a few members have the same mechanism, but most elaterid subfamilies can click. A spine on the prosternum can be snapped into a corresponding notch on the mesosternum, producing a violent "click" that can bounce the beetle into the air. Clicking is mainly used to avoid predation, although it is also useful when the beetle is on its back and needs to right itself. There are about 9300 known species worldwide, and 965 valid species in North America.

The beetle family Phengodidae is known also as glowworm beetles, whose larvae are known as glowworms. The females and larvae have bioluminescent organs. They occur throughout the New World from extreme southern Canada to Chile. The recently recognized members of the Phengodidae, the Cydistinae, are found in Western Asia. The family Rhagophthalmidae, an Old World group, used to be included in the Phengodidae.

Glowworm or glow-worm is the common name for various groups of insect larvae and adult larviform females that glow through bioluminescence. They include the European common glow-worm and other members of the Lampyridae, but bioluminescence also occurs in the families Elateridae, Phengodidae, and Rhagophthalmidae among beetles; as well as members of the genera Arachnocampa, Keroplatus, and Orfelia among keroplatid fungus gnats.

The Rhagophthalmidae are a family of beetles within the superfamily Elateroidea. Members of this beetle family have bioluminescent organs on the larvae, and sometimes adults, and are closely related to the Phengodidae, though historically they have been often treated as a subfamily of Lampyridae, or as related to that family. Some recent evidence suggested that they were the sister group to the Phengodidae, and somewhat distantly related to Lampyridae, whose sister taxon was Cantharidae, but more reliable genome-based phylogenetics placed as the sister group to the Lampyridae.

The Omalisinae are a small subfamily of morphologically derived elaterid beetles. The Omalisinae were long considered an independent family in the deprecated family Cantharoidea, and later a family in the Elateroidea, but molecular phylogenies have demonstrated the morphological similarity of Omalisinae to other soft bodied beetles is a case of parallel evolution (homoplasy) of their soft bodies, rather than an apomorphy. Members of this beetle subfamily have been reported to have bioluminescent organs on the larvae, although no recent publications have confirmed this. Some recent evidence indicated they were the sister group to a clade comprising the families Rhagophthalmidae and Phengodidae, however a more comprehensive phylogenetic analysis based on genome sequences strongly supported the Omalisinae as being contained within the Elateridae.

Plastocerus is a genus of click beetles, the sole member of the subfamily Plastocerinae; while it has historically often been ranked as a family, the genus is now placed firmly within the family Elateridae.

Drilini is a tribe of beetles known commonly as the false firefly beetles, in the family Elateridae.

Eucnemidae, or false click beetles, are a family of polyphagan beetles including about 1700 species distributed worldwide.

Omethidae is a family of Elateroidea sometimes known as the false soldier beetles.

Agrypninae is a subfamily of click beetles in the family Elateridae. There are at least 130 genera and more than 430 described species in Agrypninae.

The Cantharoid beetles are a deprecated non-monophyletic taxonomic grouping, whose former members are now mostly within the currently accepted superfamily Elateroidea, and some are now within Elateridae. One former family, Cneoglossidae, is now in the superfamily Byrrhoidea.

Oestodinae is a subfamily of click beetles in the family Elateridae. There are at least two genera in Oestodinae.

Tetralobinae is a subfamily of click beetles in the family Elateridae. There are about 7 genera and more than 20 described species in Tetralobinae.

Sinopyrophorus is a genus of bioluminescent hard-bodied clicking beetles in the superfamily Elateroidea, and is the sole member of the recently recognized family Sinopyrophoridae. The genus currently contains a single species, Sinopyrophorus schimmeli, which was described in 2019 from the subtropical evergreen broadleaf forests of western Yunnan, China.

The Cydistinae are a subfamily of phengodid beetles (Phengodidae). It contains the genera Cydistus and Microcydistus. The Cydistinae were until recently, incertae sedis due to their strange morphological characteristics, however molecular phylogenetics have shown them to be members of the Phengodidae. Unlike other Phengogidae, which are found exclusively in the Americas, Cydistinae are found in western Asia, including Southern and eastern Turkey, Jordan, Israel, Iraq, Iran, and possibly Syria.

The Phengodinae are a subfamily of phengodid beetles (Phengodidae). It contains mostly North American species. 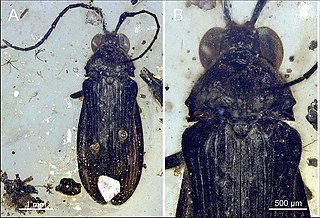 Mysteriomorphus is an extinct genus of beetle, and the only member of the family Mysteriomorphidae. It is known from one described species, Mysteriomorphus pelevini found in Burmese amber, dating to the early part of the Cenomanian stage of the Late Cretaceous but more species are likely due to the morphological diversity of known specimens. It was initially placed in Elateriformia incertae sedis, but a subsequent study found that it was better placed within the Elateroidea, close to Elateridae.