Throscidae is a family of elateroid beetles found worldwide (except New Zealand) with around 150 species in 5 extant genera. The larvae are soil-dwelling, siphoning fluid from mycorrhizae attached to trees. The adults are short-lived, with the adult males being noted for a complex mating dance. Like some other elateroids, they are capable of clicking. [1]

The Cupedidae are a small family of beetles, notable for the square pattern of "windows" on their elytra, which give the family their common name of reticulated beetles.

The telephone-pole beetle is a beetle native to the eastern United States, and the only living representative of the otherwise extinct family Micromalthidae. They have an unusual lifecycle involving asexually reproducing (parthenogenetic) female larvae, as well as non-functional "ghost adults". 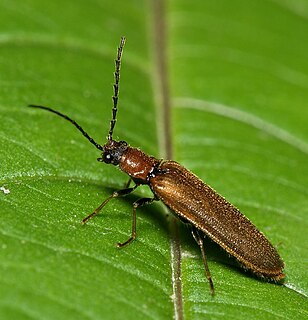 The Elateroidea are a large superfamily of beetles. It contains the familiar click beetles, fireflies, and soldier beetles and their relatives. It consists of about 25,000 species.

The Lymexylidae, also known as ship-timber beetles, are a family of wood-boring beetles. Lymexylidae belong to the suborder Polyphaga and are the sole member of the superfamily Lymexyloidea.

Ripiphoridae is a cosmopolitan family of some 450 described species of beetles sometimes called "wedge-shaped beetles". Ripiphoridae are unusual among beetle families in that many species are hypermetamorphic parasitoids, an attribute that they share with the Meloidae. Members of the family differ in their choice of hosts, but most attack various species of bees or wasps, while some others attack cockroaches or beetles. Many species of Ripiphoridae have abbreviated elytra, and flabellate or pectinate antennae.

Priacma is a genus of beetles in the family Cupedidae. It contains a single extant species, Priacma serrata native to western North America and one fossil species, P. megapuncta from the Cenomanian aged Burmese amber. Species previously assigned to the genus from the Yixian Formation of China have been subsequently placed in the separate genus Apriacma.

Jacobsoniidae are a family of tiny beetles belonging to Staphylinoidea. The larvae and adults live under bark, in plant litter, fungi, bat guano and rotten wood. There are around 28 described species in three genera:

The Brachypsectridae are a family of beetles commonly known as the Texas beetles. There are only two extant genera, Brachypsectra and Asiopsectra. Brachypsectra has a cosmopolitan distribution, mostly in arid regions, while Asiopsectra is found in Central Asia and the Middle East.

Eucnemidae, or false click beetles, are a family of elateroid beetles including about 1700 species distributed worldwide. 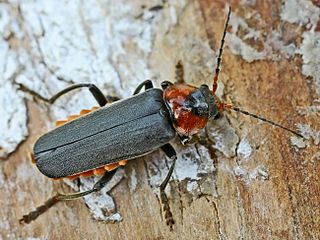 Cantharinae is a subfamily of beetles in the family Cantharidae. There are at least 200 described species in Cantharinae.

Cybocephalidae is a family of sap, bark and fungus beetles in the order Coleoptera with a wide global distribution. The type genus Cybocephalus has more than 200 species in it and the entire family has about 220 species in all. Many species are predators of armoured scale insects (Diaspididae). There are four tarsal segments on all the legs. The body is only slightly longer than wide and very convex and shiny. They are small and about 1 to 3 mm long. The insect can roll into a ball like position with its downward facing head. The tarsomeres are lobed underneath. The family is sometimes treated as a subfamily within the Nitudulidae.

Ptilodactylidae is a family of beetles in the order Coleoptera. There are about 6 genera and 15 described species of North American Ptilodactylidae, but they are considerably more diverse elsewhere. 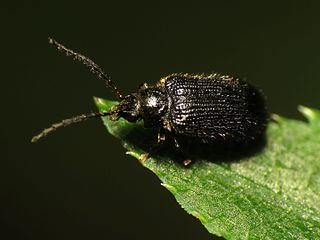 Artematopodidae is a family of soft-bodied plant beetles in the superfamily Elateroidea. They are mostly found in understory forest foliage. The life history of the group is obscure, larvae of the genera Eurypogon and Macropogon likely feed on moss, while the larvae of Artematopus have been fed insect remains.The oldest fossils of the family date to the Middle Jurassic. 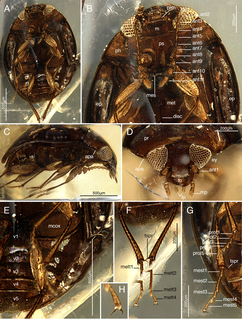 Cyclaxyridae are a family of beetles in the superfamily Cucujoidea. The only living genus is Cyclaxyra, with two species endemic to New Zealand. Other species have been named from fossils. They are also known as sooty mould beetles due to the association of Cyclaxyra with sooty mould. The extant species are mycophagous, feeding on spores, conidia, and hyphae.

Burmese amber is fossil resin dating to the early Late Cretaceous Cenomanian age recovered from deposits in the Hukawng Valley of northern Myanmar. It is known for being one of the most diverse Cretaceous age amber paleobiotas, containing rich arthropod fossils, along with uncommon vertebrate fossils and even rare marine inclusions. A mostly complete list of all taxa described up until 2018 can be found in Ross 2018; its supplement Ross 2019b covers most of 2019.