The rove beetles are a family (Staphylinidae) of beetles, [1] primarily distinguished by their short elytra (wing covers) that typically leave more than half of their abdominal segments exposed. With roughly 63,000 species in thousands of genera, the group is currently recognized as the largest extant family of organisms. It is an ancient group, with fossilized rove beetles known from the Triassic, 200 million years ago, and possibly even earlier if the genus Leehermania proves to be a member of this family. [2] They are an ecologically and morphologically diverse group of beetles, and commonly encountered in terrestrial ecosystems.

One well-known species is the devil's coach-horse beetle. For some other species, see list of British rove beetles.

As might be expected for such a large family, considerable variation exists among the species. Sizes range from <1 to 35 mm (1.4 in), with most in the 2–8 mm range, and the form is generally elongated, with some rove beetles being ovoid in shape. Colors range from yellow and red to reddish-brown to brown to black to iridescent blue and green. The antennae usually have 11 segments and are filiform, with moderate clubbing in some genera. The abdomen may be very long and flexible, and some rove beetles superficially resemble earwigs.These beetles are able to fold themselves into a sort of origami shape.

Some members of Paederina (specifically the genus Paederus ), a subtribe of Paederinae, contain a potent vesicant in their haemolymph that can produce a skin irritation called dermatitis linearis, [3] also known as Paederus dermatitis. The irritant pederin is highly toxic, more potent than cobra venom. [4]

Rove beetles are known from every type of habitat in which beetles occur, and their diets include just about everything except the living tissues of higher plants, but now including higher plants with the discovery of the diet of Himalusa thailandensis. Most rove beetles are predators of insects and other invertebrates, living in forest leaf litter and similar decaying plant matter. They are also commonly found under stones, and around freshwater margins. Almost 400 species are known to live on ocean shores that are submerged at high tide, [5] including the pictured rove beetle, [6] although these are much fewer than 1% of the worldwide total of Staphylinidae. Other species have adapted to live as inquilines in ant and termite colonies, and some live in mutualistic relationships with mammals whereby they eat fleas and other parasites, benefiting the host. A few species, notably those of the genus Aleochara , are scavengers and carrion feeders, or are parasitoids of other insects, particularly of certain fly pupae. To profit from the alleged advantages, several staphylinidae have been transferred into Italy, Hawaii, the continental United States, and Easter Island by practitioners. Another advantage of the rove beetle would be how these beetles are sensitive to changes in the environment, such as habitat alteration. By having such a characteristic, the beetles are a possible use to have in human-dominated environments, as a possible ecological disturbance indicator as tested with studies.

Although rove beetles' appetites for other insects would seem to make them obvious candidates for biological control of pests, and empirically they are believed to be important controls in the wild, experiments using them have not been notably successful. Greater success is seen with those species that are parasitoids (genus Aleochara).

Rove beetles of the genus Stenus are very interesting insects. They are specialist predators of small invertebrates such as collembola. Their labium can shoot out from the head using blood pressure. The thin rod of the labium ends in a pad of bristly hairs and hooks and between these hairs are small pores that exude an adhesive glue-like substance, which sticks to prey. [7]

Classification of the 63,650 (as of 2018) staphylinid species is ongoing and controversial, with some workers proposing an organization of as many as 10 separate families, but the current favored system is one of 32 subfamilies, about 167 tribes (some grouped into supertribes), and about 3,200 genera. About 400 new species are being described each year, and some estimates suggest three-quarters of tropical species are as yet undescribed.[ citation needed ] 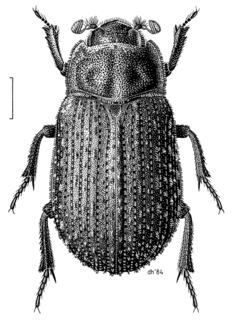 Trox scaber is a beetle of the family Trogidae. The 5 to 8 mm long insect is found worldwide, including in Europe, and lives in bird nests.

Paederus dermatitis, medically known as dermatitis linearis, is a skin irritation resulting from contact with the hemolymph of certain rove beetles, a group that belongs to the insect order Coleoptera and the genus Paederus. Other local names given to Paederus dermatitis include spider-lick, whiplash dermatitis, and Nairobi fly dermatitis.

Pentarthrum huttoni is a species of wood boring weevil in family Curculionidae. It has a mainly nearctic distribution, but has also been reported from several European countries. It was first reported in Austria in 2006 when it was found to be the cause of disintegration of historically significant 18th century softwood coffins in the crypt of St. Michael's church in the center of Vienna.

The Paederinae are a subfamily of the Staphylinidae, rove beetles. The Paederinae include two tribes, Paederini and Pinophilini. This insect is commonly known as Tomcat.

Paederus is a genus of small beetles of the family Staphylinidae. With 622 valid species assigned by 1987 to the subtribe Paederina, and with all but 148 within Paederus itself, the genus is large. Due to toxins in the hemolymph of some species within this genus, it has given its name to paederus dermatitis, a characteristic skin irritation that occurs if one of the insects is crushed against skin. That name, Paederus dermatitis, is a poor choice because, decades earlier, the affliction had been called dermatitis linearis, a name that works in all languages, not just English, because of its Latin origin; the name Paederus dermatitis is also inappropriate because it has shown to be caused by (a) only a few species of the genus Paederus, but (b) also a few species that belong to closely related genera within the subtribe Paederina. A scholarly paper in 2002 suggested that a Paederus species could have been responsible for some of the ten Plagues of Egypt described in the Bible's Book of Exodus.

Anastrangalia dubia is a species of beetle of family Cerambycidae.

Anotylus tetracarinatus is a small rove beetle with a wide distribution. It is the most common species of the genus, and maybe even of the family, in the whole of Central Europe.

Tillus elongatus is a species of beetle in the Family of checkered beetles Cleridae. It is found in the Palearctic. The “Holz” in the German common name Holzbuntkäfer indicates that these checkered beetles are found in wood. Although Tillus elongatus can reach up to a size of 1 cm long, the beetle is rarely seen by humans, as it primarily resides hidden in the wood of trees. The colouration of the males differs from that of the females.

Liparus coronatus is a species of beetles belonging to the family Curculionidae.

Dryocoetes autographus is a species of weevil native to Europe.

Hylesinus fraxini is a species of weevil native to Europe.

Dryocoetes villosus is a species of weevil native to Europe. 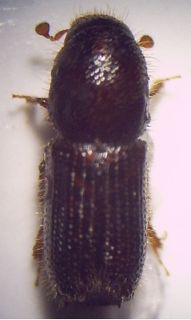 Orthotomicus laricis is a species of weevil native to Europe.

Pityogenes bidentatus is a species of bark beetle native to Europe.

Trypodendron domesticum is a species of weevil native to Europe. 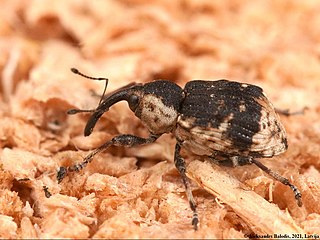 Grypus equiseti, known by the common name horsetail weevil, is a species of weevil native to Europe. It feeds on Equisetum arvense and Equisetum palustre plants. It has been introduced to New Zealand to control Equisetum arvense, which is an invasive species there.

Notaris acridulus is a species of weevil native to Europe.

Thryogenes nereis is a species of weevil native to Europe.

Tournotaris bimaculatus is a species of weevil native to Europe. 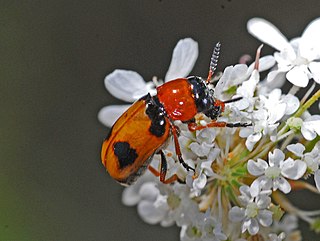 Coptocephala unifasciata is a species of leaf beetle belonging to the family Chrysomelidae, subfamily Cryptocephalinae.

For the Palaearctic fauna, the most up-to-date works are: