The Interim Register of Marine and Nonmarine Genera (IRMNG) is a taxonomic database which attempts to cover published genus names for all domains of life from 1758 in zoology (1753 in botany) up to the present, arranged in a single, internally consistent taxonomic hierarchy, for the benefit of Biodiversity Informatics initiatives plus general users of biodiversity (taxonomic) information. In addition to containing over 490,000 published genus name instances as at March 2020 (also including subgeneric names in zoology), the database holds over 1.7 million species names (1.3 million listed as "accepted"), although this component of the data is not maintained in as current or complete state as the genus-level holdings. IRMNG can be queried online for access to the latest version of the dataset and is also made available as periodic snapshots or data dumps for import/upload into other systems as desired.

IRMNG contains scientific names (only) of the genera, a subset of species, and principal higher ranks of most plants, animals and other kingdoms, both living and extinct, within a standardized taxonomic hierarchy, with associated machine-readable information on habitat (e.g. marine/nonmarine) and extant/fossil status for the majority of entries. [1] The database aspires to provide complete coverage of both accepted and unaccepted genus names across all kingdoms, with a subset only of species names included as a secondary activity. In its March 2020 release, IRMNG contained 492,620 genus names, of which 232,093 were listed as "accepted", 121,389 "unaccepted", 7,462 of "other" status i.e. interim unpublished, nomen dubium, nomen nudum, taxon inquirendum or temporary name, and 131,676 as "uncertain" (unassessed for taxonomic status at this time). [2] The data originate from a range of (frequently domain-specific) print, online and database sources, including (among others) Nomenclator Zoologicus for animals and Index Nominum Genericorum for plants, and are reorganised into a common data structure to support a variety of online queries, generation of individual taxon pages, and bulk data supply to other biodiversity informatics projects. IRMNG content can be queried and displayed freely via the web, and download files of the data down to the taxonomic rank of genus as at specific dates are available in the Darwin Core Archive (DwC-A) format. The data include homonyms (with their authorities), including both available (validly published) and selected unavailable names. [3]

Estimates for "accepted names" as held at March 2020 are as follows, broken down by kingdom:

IRMNG was initiated and designed by Australian biologist and data manager Tony Rees in 2006. [1] [4] For his work on this and other projects, GBIF awarded him the 2014 Ebbe Nielsen Prize. [4] From 2006 to 2014 IRMNG was located at CSIRO Marine and Atmospheric Research, and was moved to the Flanders Marine Institute (VLIZ) over the period 2014–2016; from 2016 onwards all releases have been available via its new website www.irmng.org which is hosted by VLIZ. [1] [5] VLIZ also hosts the World Register of Marine Species (WoRMS), using a common infrastructure. [6]

Content from IRMNG is used by several global Biodiversity Informatics projects including Open Tree of Life, [7] the Global Biodiversity Information Facility (GBIF), [8] and the Encyclopedia of Life (EOL), [9] in addition to others including the Atlas of Living Australia [10] and the Global Names Architecture (GNA)'s Global Names Resolver. [11] From 2018 onwards, IRMNG data are also being used to populate the taxonomic hierarchy and provide generic names for a range of taxa in the areas of protists (kingdoms Protozoa and Chromista) and plant algae (Charophyta, Chlorophyta, Glaucophyta and Rhodophyta) in the Catalogue of Life. [12]

Charales is an order of freshwater green algae in the division Charophyta, class Charophyceae, commonly known as stoneworts. Depending on the treatment of the genus Nitellopsis, living (extant) species are placed into either one family (Characeae) or two. Further families are used for fossil members of the order. Linnaeus established the genus Chara in 1753.

Ebbe Schmidt Nielsen was a Danish entomologist influential in systematics and Lepidoptera research, and an early proponent of biodiversity informatics. The journal Invertebrate Systematics was established with significant contributions from Nielsen, and he assisted in the founding of the Global Biodiversity Information Facility (GBIF). Nielsen wrote several books, published over eighty scientific papers, and was highly regarded within the scientific community. Following his death, the GBIF organised the Ebbe Nielsen Prize in his memory, awarded annually to promising researchers in the field of biodiversity informatics. The moth Pollanisus nielseni is named after Nielsen. 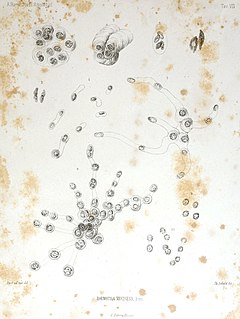 Hormotila is a genus of green algae in the family Chaetophoraceae.

Parechelus is an extinct genus of prehistoric bony fish that lived during the Ypresian. The genus was circumscribed by Edgard Casier in 1967 for his description of P. parechelus.

Iguanodectes is a genus of freshwater fish found in tropical South America, with eight currently described species. They are all small tetras, none longer than 5 inches, and often have attractive silvery or striped scales, which makes them a target for the ornamental fish industry. Alongside the genus Piabucus, it is in the subfamily Iguanodectinae, which in turn is in the family Iguanodectidae. The genus Bryconops, which is also in Iguanodectidae, makes up a sister clade to Iguanodectinae. 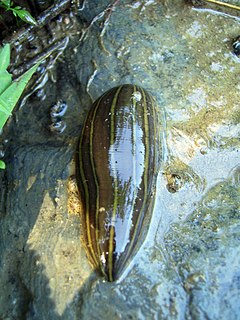 Hirudinidae is a family of leeches belonging to the order Arhynchobdellida.

Cloacina is a genus of parasitic nematodes in the family Chabertiidae. Species are parasites of marsupials in Australia. 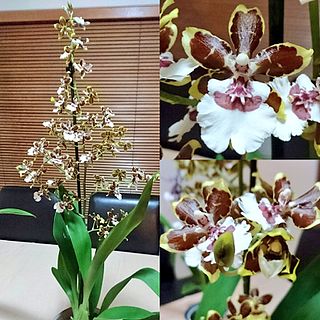 × Oncostele, abbreviated Ons., is a hybrid genus of orchids, used for greges containing at least one ancestor species from the genera Oncidium (Onc.) and Rhynchostele (Rst.). The nothogenus was defined in 2003 by J. M. H. Shaw. 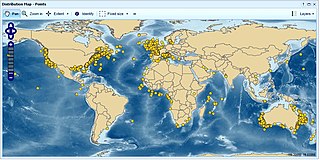 Compsosaurus is an extinct genus of phytosaur, a crocodile-like reptile that lived during the Triassic. Its fossils have been found in North Carolina. The type species, Compsosaurus priscus, was named by American paleontologist Joseph Leidy in 1856, although other sources say 1857. Compsosaurus may have been the same animal as the related Belodon.

Anthony J. J. ("Tony") Rees is a British-born software developer, data manager and biologist resident in Australia since 1986, and previously a data manager with CSIRO Marine and Atmospheric Research. He is responsible for developing a number of software systems currently used in science data management, including c-squares, Taxamatch, and IRMNG, the Interim Register of Marine and Nonmarine Genera. He has also been closely involved with the development of other biodiversity informatics initiatives including the Ocean Biogeographic Information System (OBIS), AquaMaps, and the iPlant Taxonomic Name Resolution Service (TNRS).

Haementeria is a genus of leeches in the family Glossiphoniidae. The genus was described in 1849 by Filippo De Filippi.

Talaurinus is a genus of weevils belonging to the family Curculionidae. The species of this genus are found in Australia. The genus first appeared in scientific literature in the Transactions of the Entomological Society of New South Wales, published by William MacLeay in 1865. 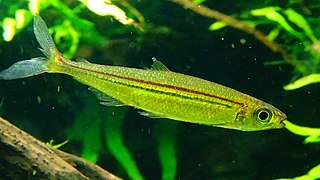 Iguanodectinae is a subfamily of small freshwater fish in the family Iguanodectidae. They are most prominently found in the Amazon river basin and its major tributaries, but they are also known from the Tocantins, Orinoco, and Paraguay rivers. It has two genera, Piabucus and Iguanodectes. Some species in the subfamily are taken from the wild for aquariums, like the red- and green-line lizard tetras. There is minor, but ongoing, debate regarding its taxonomy.