There are three extant species of bird in the genus Icterus that are named troupial (turpial in Spanish), formerly considered one species:

In addition, one extinct species, the Talara troupial (Icterus turmalis) is known from late Quaternary fossil remains from Peru.

The Baltimore oriole is a small icterid blackbird common in eastern North America as a migratory breeding bird. It received its name from the resemblance of the male's colors to those on the coat-of-arms of Lord Baltimore. Observations of interbreeding between the Baltimore oriole and the western Bullock's oriole, Icterus bullockii, led to both being classified as a single species, called the northern oriole, from 1973 to 1995. Research by James Rising, a professor of zoology at the University of Toronto, and others showed that the two birds actually did not interbreed significantly. 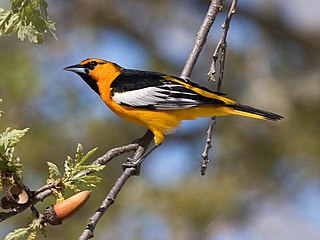 Bullock's oriole is a small New World blackbird. At one time, this species and the Baltimore oriole were considered to be a single species, the northern oriole. This bird is named after William Bullock, an English amateur naturalist. 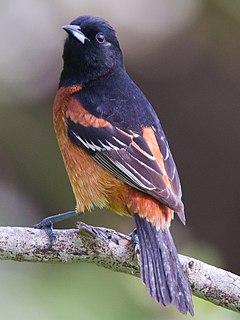 The orchard oriole is the smallest species of icterid. The subspecies of the Caribbean coast of Mexico, I. s. fuertesi, is sometimes considered a separate species, the ochre oriole or Fuertes's oriole.

New World orioles are a group of birds in the genus Icterus of the blackbird family. Unrelated to Old World orioles of the family Oriolidae, they are strikingly similar in size, diet, behavior, and strongly contrasting plumage, a good example of convergent evolution. As a result, the two have been given the same vernacular name. 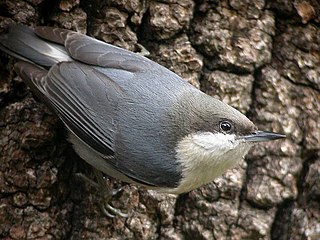 The pygmy nuthatch is a tiny songbird, about 10 cm (4 inches) long and about 10 grams in weight. 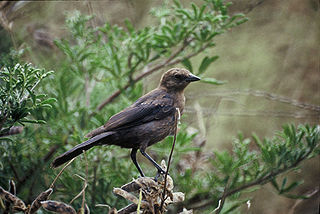 Cowbirds are birds belonging to the genus Molothrus in the family Icteridae. They are of New World origin. They are brood parasites, laying their eggs in the nests of other species. 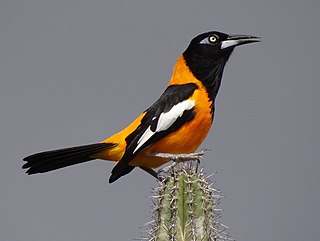 The Venezuelan troupial is the national bird of Venezuela. It is found in Colombia, Venezuela, and the Caribbean islands of Aruba, Curaçao, Bonaire, and Puerto Rico. Previously part of a superspecies simply named the troupial, it was recently split together with the orange-backed troupial and Campo troupial.

The Scott's oriole is a medium-sized icterid. 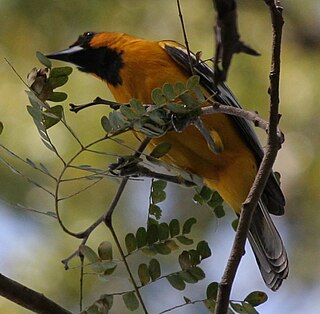 The streak-backed oriole is a medium-sized species of passerine bird from the icterid family. It is native to Central America and Mexico and is an occasional visitor to the United States. 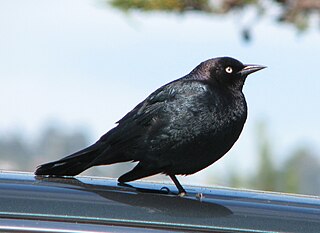 The yellow-tailed oriole is a passerine bird in the New World family Icteridae. It breeds from southern Mexico to western Peru and northwestern Venezuela; in Peru it also lives in a river valley corridor.

The campo troupial or campo oriole is a species of bird in the family Icteridae that is found in northeastern Brazil. At one time thought to be conspecific with the Venezuelan troupial and orange-backed troupial, it is now accepted as a separate species. It is a fairly common bird and the International Union for Conservation of Nature has rated it as a "least-concern species". 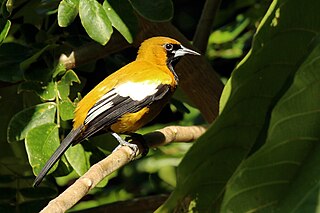 The Jamaican oriole is a species of bird in the family Icteridae. 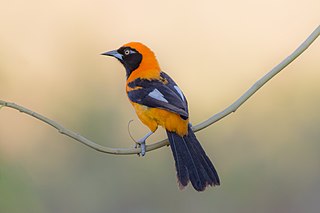 The orange-backed troupial is a species of bird in the family Icteridae. It is found in Guyana, Brazil, Paraguay, and eastern Ecuador, Bolivia, and Peru. It is closely related to the Venezuelan troupial and Campo troupial, and at one time, all three were considered to be the same species. 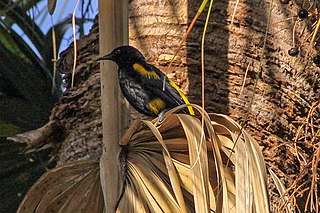 The Hispaniolan oriole is a species of bird in the family Icteridae. It is endemic to the Caribbean island of Hispaniola. 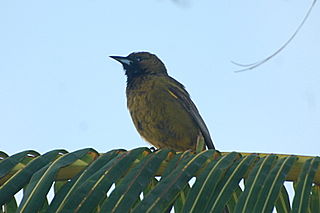 The Cuban oriole is a species of songbird in the family Icteridae. It is endemic to Cuba. 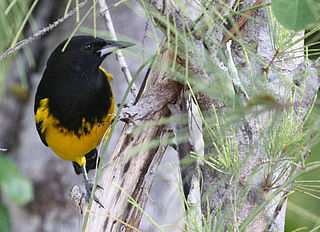 The Bahama oriole is a species of songbird in the New World blackbird family - Icteridae. It is endemic to the Bahamas. It is listed as critically endangered by the IUCN (CR). The taxon was originally classified as its own distinct species in 1890 by Joel Asaph Allen before it was lumped with the Cuban oriole, Hispaniolan oriole, and Puerto Rican oriole into a single species by the ornithologist James Bond in his book "Birds of the West Indies". It wasn't until 2010 that all four birds were again elevated to full species status based on a combination of evidence from DNA, plumage and song. Since it was not recognized as a distinct species for so long, the Bahama oriole's preferred non-breeding season habitat is unknown and current estimates of its exact numbers remain vague.

The Puerto Rican oriole is a species of bird in the family Icteridae, and genus Icterus or New World blackbirds. This species is a part of a subgroup of orioles that includes the North American orchard oriole, Icterus spurius, and the hooded oriole, Icterus cucullatus.

The convex-billed cowbird is an extinct species of bird in the family Icteridae, described in 1947 by Alden H. Miller. It is the only member of its genus, Pandanaris.