Trove was a social news aggregation web and mobile application, with apps available on iOS, Android, and Fire Phone. Trove is also the name of the company behind the application.

Trove was shut down in December 2015.

Trove was a free social news discovery and sharing platform where users connect with others through shared topical interests. Users can curate personalized newsfeeds based on their interests, called troves. Users then “pick” the best stories to share with their followers both on Trove and other social media sites. Users could follow a trove to see those picks on their home page.

In January 2015, Trove added a “Smartpick” capability. When enabled, any relevant articles posted to a user's Twitter account will be categorized and picked on Trove automatically. [1]

In October 2015, Trove launched “conversations”, which enables curators to engage their following in a discussion about a particular pick.

In December 2015, Trove was shut down after being integrated with SocialCode. [6]

Trove's First Launch In April 2011, the first iteration of Trove was launched as a personalized news web application. [7]

Trove's Relaunch and Platform Releases In January 2014, Trove relaunched as an iOS and web application. The New York Times called Trove, "a treasure for news junkies." [9] CNBC called Trove, "a Pinterest board for news." [10] USA Today [4] and The Today Show [11] have also given positive reviews.

Apple Watch In April 2015, Trove announced the release of their Apple Watch integration. Users could scan headlines, pick stories, and leave comments directly from the watch. [14]

Amazon Echo In September 2015, Trove became available on Amazon Echo as an Alexa skill. Users could instruct Alexa to ask Trove about the latest news, or request information on a specific topic. [15]

Ambient devices are a type of consumer electronics, characterized by their ability to be perceived at-a-glance, also known as "glanceable". Ambient devices use pre-attentive processing to display information and are aimed at minimizing mental effort. Associated fields include ubiquitous computing and calm technology. The concept is closely related to the Internet of Things.

Personalization consists of tailoring a service or a product to accommodate specific individuals, sometimes tied to groups or segments of individuals. A wide variety of organizations use personalization to improve customer satisfaction, digital sales conversion, marketing results, branding, and improved website metrics as well as for advertising. Personalization is a key element in social media and recommender systems. Personalization is affecting every sector of society -- work, leisure and citizenship. 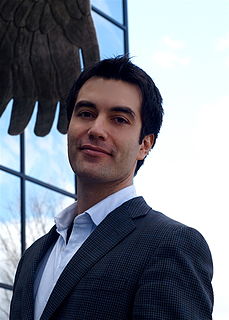 Eric Austin Litman is an American entrepreneur and angel investor, and currently serves as CEO of the robotics health technology company, aescape, inc. Litman co-founded Proxicom, built Viaduct from a one-man shop through a merger with the Wolf Group, and was the founder and CEO of Medialets, a mobile ad serving and advertising analytics company acquired by WPP plc.

Samba TV is an advertising and analytics company headquartered in San Francisco, California. It was founded in 2008 by early employees of BitTorrent, including Samba TV’s current CEO, Ashwin Navin. It develops software for televisions, set-top boxes, smart phones and tablets to enable interactive television through personalization. Through its portfolio of applications and TV platform technologies, Samba TV is built directly into the TV or set-top box and will recognize onscreen content—live or time-shifted—and make relevant information available to users at their request. The service is available only after a user activates it on a device, and is supported by interest-based advertising delivered on the television or on devices within the household. Through APIs and SDKs for mobile application software developers, Samba TV is usable on a second screen or the TV itself. Samba TV has a global addressable footprint of 46 million devices globally, 28 million of which are in the United States. Its applications are available on over 30 million screens in 118 countries. 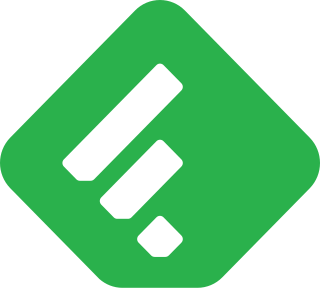 Feedly is a news aggregator application for various web browsers and mobile devices running iOS and Android. It is also available as a cloud-based service. It compiles news feeds from a variety of online sources for the user to customize and share with others. Feedly was first released by DevHD in 2008.

"Social Reader" may refer to the Washington Post Social Reader, or may be used to describe a more general category of social news reading applications.

Socialcam was a mobile social video application for iPhone, Android and Windows Phone, that was launched March 7, 2011 and ended October 28, 2015. It allowed users to capture and share videos online and on mobile, as well as via Facebook, Twitter, and other social networks. By July 2012, the application passed 16 million downloads and was acquired by Autodesk for $60 million. Socialcam was founded by Michael Seibel, Ammon Bartram, and Guillaume Luccisano. Its facility was located in San Francisco, California, US. 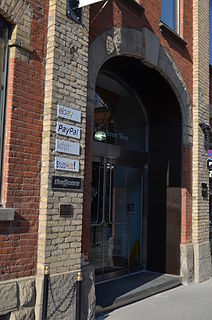 Score Media and Gaming Inc. is a digital media company based in Toronto, Canada, often referred to as theScore. It was founded in 2012 by John S. Levy, the company's Chief Executive Officer and Chairman. The company owns and operates digital sports media and sports betting products which deliver sports scores, data, news, and sportsbook offerings via emerging and established platforms. The company also previously owned The Score Television Network, which was acquired by Rogers Communications in October 2012 and is today known as Sportsnet 360. The transaction did not include theScore's digital media assets, including its mobile apps and websites.

Zola Books is a New York based social eBook retailer that combines a social network, bookseller and recommendation engine. Founded by literary agents and launched in September 2012. the company was described by The Washington Post as "a venture whose strategy is to combine all three of the e-book world’s major market functions — retailing, curation and social-networking — in an ambitious bid to become a one-stop destination for book lovers on the Web".

The Old Reader is a web-based news aggregator that delivers website, blog, and other Internet content to a web-based inbox. The service sprung up when Google removed social features from Google Reader; the site supports social media sharing, including the ability to "like" content, and find friends via social media networks. 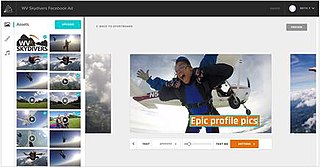 Animoto is a cloud-based video creation service that produces video from photos, video clips, and music into video slideshows, and customized web-based presentations. Animoto is based in New York City with an office in San Francisco.

Amazon Echo, often shortened to Echo, is an American brand of smart speakers developed by Amazon. Echo devices connect to the voice-controlled intelligent personal assistant service Alexa, which will respond when a user says "Alexa". Users may change this wake word to "Amazon", "Echo", "Computer", as well as some other options. The features of the device include voice interaction, music playback, making to-do lists, setting alarms, streaming podcasts, and playing audiobooks, in addition to providing weather, traffic and other real-time information. It can also control several smart devices, acting as a home automation hub.

Venmo is an American mobile payment service founded in 2009 and owned by PayPal since 2012. Venmo was aimed at friends and family who wish to split bills, e.g. for movies, dinner, rent, or event tickets. Account holders can transfer funds to others via a mobile phone app; both the sender and receiver must live in the United States. The company handled $159 billion in transactions in 2020.

Tasker is an Android application developed by João Dias. It focuses on performing user-defined actions based on contexts in user-defined profiles, activated by click- or timer-based home screen widgets. It is expandable via plugins from the developer and third-party apps. Although the paid version is available on Google Play, a 7-day free trial version is downloadable as an APK on the developer's website. The trial version does not allow restoring backups.

A smart speaker is a type of loudspeaker and voice command device with an integrated virtual assistant that offers interactive actions and hands-free activation with the help of one "hot word". Some smart speakers can also act as a smart device that utilizes Wi-Fi, Bluetooth and other protocol standards to extend usage beyond audio playback, such as to control home automation devices. This can include, but is not limited to, features such as compatibility across a number of services and platforms, peer-to-peer connection through mesh networking, virtual assistants, and others. Each can have its own designated interface and features in-house, usually launched or controlled via application or home automation software. Some smart speakers also include a screen to show the user a visual response.

Endel Sound GmbH is a German software company that owns and operates the Endel app, which provides personalized sound environments aimed at improving the user's productivity and well-being through means such as reduce stress, increase focus and improve sleep. The app generates real time sounds based on various inputs such as user location, time, weather, cadence, heart rate etc.

Neighbors by Ring, also known as simply Neighbors, is a hyperlocal social networking app owned by Ring LLC, a subsidiary of Amazon.com Inc.

The Samsung Galaxy M52 5G is a mid-range Android smartphone developed by Samsung Electronics as a part of its Galaxy M series. The device was scheduled to be launched on 19 September 2021 in India but the launch event was postponed to 28 September 2021. It was unveiled on 24 September 2021. Its key features are Qualcomm's new upper mid-range SoC Snapdragon 778G 5G, 120 Hz Super AMOLED Plus display, a triple camera setup with a 64 MP main camera and a 5000 mAh battery with 25W fast charging support. It went on sale on 3 October 2021 in India.