He graduated from California Institute of the Arts with a Bachelor of Fine Arts in 1975. He was an adjunct professor at Columbia University and currently teaches at the University of Texas. [1]

Brauntuch has exhibited his art work at the 2006 Whitney Biennial, [2] and in 2000 at the Modern Art Despite Modernism exhibit at The Museum of Modern Art. His work was in two group shows in 1982: documenta 7, Kassel and the Venice Biennale. In 1977, his work was in the Pictures exhibition at Artists Space. [3] 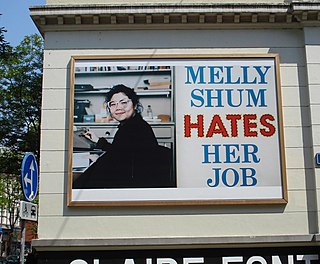 Kenneth Robert Lum, OC is a dual citizen Canadian and American academic, painter, photographer, sculptor, and writer. Working in a number of media including painting, sculpture and photography, his art ranges from conceptual in orientation to representational in character and is generally concerned with issues of identity in relation to the categories of language, portraiture and spatial politics.

Pope.L is an American visual artist best known for his work in performance art, and interventionist public art. However, he has also produced art in painting, photography and theater. He was included in the 2002 Whitney Biennial and is a Guggenheim Fellow and a recipient of the Creative Capital Visual Arts Award. Pope.L was also included in the 2017 Whitney Biennial.

Dana Schutz is an American artist who lives and works in Brooklyn, New York. Schutz is known for her gestural, figurative paintings that often take on specific subjects or narrative situations as a point of departure.

Christian Jankowski is a contemporary multimedia artist who largely works with video, installation and photography. He lives and works in Berlin and New York.

Allan McCollum is a contemporary American artist who lives and works in New York City. In 1975, his work was included in the Whitney Biennial, and he moved to New York City the same year. In the late 1970s he became especially well known for his series, Surrogate Paintings.

Daniel Colen is an American artist based in New York. His work consists of painted sculptures appropriating low-cultural ephemera, graffiti-inspired paintings of text executed in paint, and installations.

Nina Berman is an American documentary photographer. She has published three monographs, Purple Hearts – Back from Iraq (2004), Homeland (2008) and An autobiography of Miss Wish (2017). Berman's prints have been exhibited in museums worldwide, received grants and awards, and she is a member of the NOOR photo agency and an associate professor at Columbia University.

Joe Bradley is an American visual artist, known for his minimalist and color field paintings. He is also the former lead singer of the punk band Cheeseburger. Bradley has been based in New York City and Amagansett.

Brian Belott is an artist, performer and found object art collector based in New York City.

Michael Rees is an American artist practicing sculpture making, installation, animation, and interactive computing. He has exhibited his works widely, including at the Whitney Museum of American Art, New York, NY ; Bitforms gallery, Universal Concepts Unlimited, The Aldrich Museum of Contemporary Art, Ridgefield, CT, The MARTa Museum, Herford, Germany, and The Kemper Museum of Contemporary Art, Kansas City, MO. He has experimented with a broad practice that includes performance, interactive computer programs, digital modeling and fabrication, animation, and video. Rees' work with digital media has been written about and illustrated in books, articles, and catalogues for exhibitions. His talk at the Rothko Chapel, Houston, Texas is also published.

Wade Guyton is a post-conceptual American artist who among other things makes digital paintings on canvas using scanners and digital inkjet technology.

Dana Hoey is a visual artist working with photography, using "the camera to reveal the inner life of women, especially young women." Her photographs are often ambiguous and have multiple meanings. In 1999, in an exhibition entitled Phoenix she showed a series of seventeen black-and-white photo-prints and one forty-one-foot-long digital billboard image; writing in Frieze, Vince Aletti said, "the exhibition is a mystery that bristles with clues but is ultimately unsolved; perhaps it is unsolvable." In her introduction to the catalog for Hoey's 2012 exhibit, The Phantom Sex, at the University Art Museum, University at Albany, curator Corinna Ripps Schaming wrote, "Using both staged and directed photography, her meticulously constructed pictures speak to her deep knowledge of the art and its ability to conflate fact and fiction. Her seemingly spontaneous pictures are choreographed through simple directives and are subject to her ruthless editorial eye, which is always attuned to bringing social dynamics to the fore."

Joshua Mosley is an American artist and animator. He is Professor and Chair of Fine Arts in the School of Design at the University of Pennsylvania. His work is represented by Corbett vs Dempsey in Chicago. He is the recipient of the 2007 Joseph H. Hazen Rome Prize in Visual Arts and the 2005 Pew Fellowship in the Arts.

Rebecca Morris is an abstract painter who is known for quirky, casualist compositions using grid-like structures. In 1994 she wrote Manifesto: For Abstractionists and Friends of the Non-Objective, a tongue-in-cheek but sincere response to contemporary criticism of abstract painting. She has been a professor of painting and drawing at Pasadena City College since 2000. Prior to that, she lectured at numerous colleges including Columbia University, Bard College, UCLA, USC's School of Fine Arts, and the University of Chicago.

Sidney Gross’ was an American artist and painter. His early style was influenced by the Social realism. He also drew on the Surrealist Movement that was just beginning the year he was born. By the time he was twenty, he was painting distinctively urban surrealism, while producing critically admired portraits, something he continued to do during his lifetime.

Robert Strawbridge Grosvenor is an American contemporary sculptor, installation artist, and draftsman. He is known for his monumental room installations, which border between sculpture and architecture. Grosvenor is associated with minimalism.