Troy Coker (born 30 May 1965 in Brisbane) is a former Australian international rugby union player. He played as a number 8 and was capped 27 times for Australia between 1987 and 1997. He was a member of the winning Australian squad at the 1991 Rugby World Cup and was also in the squad at the 1987 Rugby World Cup. He has two daughters, Ella and Ava. He now goes around schools in Coventry England supporting youth rugby clubs and running school PE lessons. "Profile". ESPN Scrum. Retrieved 6 September 2012.CS1 maint: discouraged parameter (link) 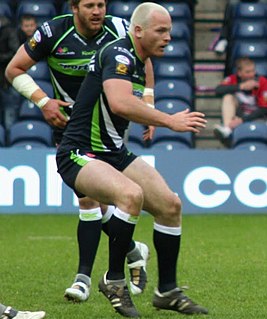 Rhys Lovegrove is an Australian former professional rugby league footballer who played for the Bradford Bulls, the London Broncos and the Hull Kingston Rovers, primarily as a second-row and occasionally as a prop. After retiring from playing Lovegrove moved into coaching and took up his first head coaching role at Keighley Cougars in June 2019. 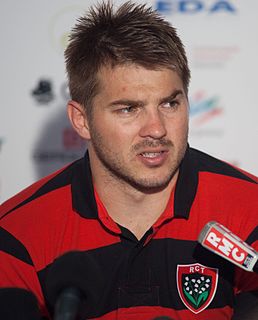 Drew Alan Mitchell is a former Australian rugby union professional player. He played on the wing or as fullback. Up to the 2006 season he played for the Queensland Reds. He played for the Western Force for the 2007–09 Super 14 seasons. From 2010 to 2013 he played for the New South Wales Waratahs. Since 2013 he has played for RC Toulon. He made his debut for Australia in 2005 and is Australia's highest try scorer in World Cup history.

Souths Rugby Club or Souths is an Australian rugby union club based in Brisbane, and the Southern districts area that currently plays in the Queensland Premier Rugby club competition. The club was established in 1948, and since then has produced a host of Queensland and Wallaby rugby players.

Chase Stanley is a New Zealand former international rugby league footballer who plays as a centre or winger for the Toronto Wolfpack in the Betfred Super League.

Thomas Nicholas Youngs is a rugby union player who plays as a hooker for Leicester Tigers in Premiership Rugby, between 2012–2015 he won 28 caps for England, including selection for the 2015 Rugby World Cup and was selected for the 2013 British & Irish Lions tour to Australia where he played in all three test matches. 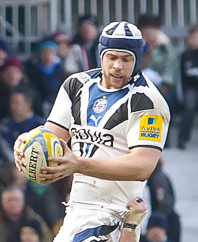 Dave Attwood is a rugby union player who plays at Lock for Bristol Bears in the Aviva Premiership. He has been described as a "big traditional tight-head lock, a master of the set piece, indeed arguably the best scrummaging second row in the country". 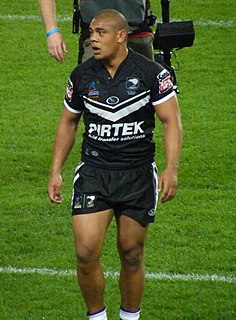 Viliami Sikalamu "Sika" Manu is a former professional rugby league footballer who played as a second-row forward for Tonga and New Zealand at international level, being a member of the World Cup winning Kiwi team who beat Australia in the 2008 World Cup Final. 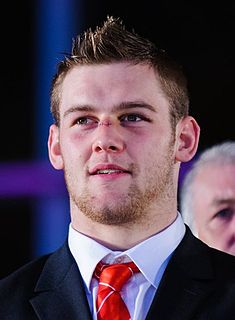 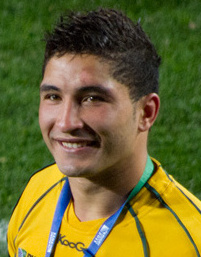 Anthony Fainga'a is an Australian professional rugby union footballer. His usual position is centre. He currently plays Super Rugby for the Brumbies.

Gavin Cowan is an Australian former professional rugby league footballer who played in the 2000s. He played at representative level for Scotland at the 2008 Rugby League World Cup, and at club level for Wests Tigers, as a fullback, wing or centre. 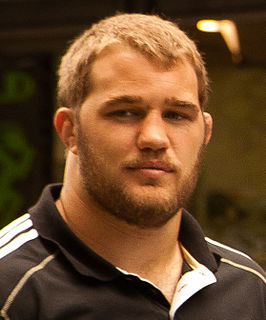 Owen Thomas Franks is a New Zealand rugby player who currently plays for Hurricanes in the Super Rugby competition. 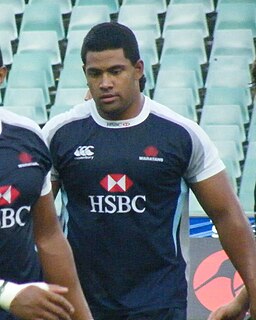 Scott Sio is an Australian rugby union player who plays for the Brumbies in Super Rugby. His playing position is prop. He made his Brumbies debut during the 2012 Super Rugby season against the Sharks in Canberra.

Paul Alo-Emile is an Samoan rugby union player. His regular playing position is prop. He plays for Stade Français Paris in the Top 14. 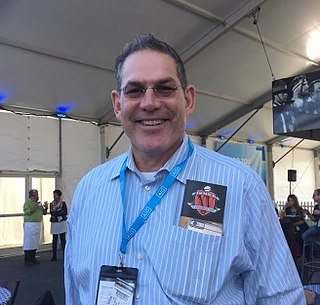 Tony Ridnell is an American businessman, former international rugby player, and army officer. He is the founder of TRInternational, Inc., a Chemicals Sales Company.

Oliver Harry Sleightholme is an English professional rugby union footballer. He plays as a winger for Northampton Saints. His father, Jon Sleightholme, was an England international.