Trubia is a parish of the municipality of Oviedo, Asturias, Spain.

It is located in the confluence of rivers Nalón and Trubia, giving the last one its name to the location.

In the 19th century, the Royal Weapons Factory of Trubia was established and provoked an important increase in the population of the parish. This factory is still in use today.

In 1885, as Pintoria and Udrión, Trubia left the municipality of Grado and was annexed to Oviedo. [1] 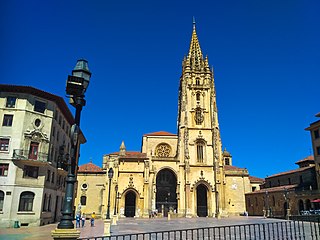 Oviedo is the capital city of the Principality of Asturias in northern Spain and the administrative and commercial centre of the region. It is also the name of the municipality that contains the city. Oviedo is located approximately 24 km (15 mi) southwest of Gijón and 23 km (14 mi) south of Avilés, both of which lie on the shoreline of the Bay of Biscay. Oviedo's proximity to the ocean of less than 30 kilometres (19 mi) in combination with its elevated position with areas of the city more than 300 metres above sea level causes the city to have a maritime climate, in spite of its not being located on the shoreline itself.

Langreo is a municipality and town of northern Spain, province of The Principality of Asturias. It is the 4th largest town of Asturias with 43.000 inhabitants. Langreo is located in the centre of Asturias, approximately 20 kilometres (12 mi) south-east of Oviedo. It was an important mining and metallurgical center.

Santo Adriano is a municipality in the Autonomous Community of the Principality of Asturias. It is bordered on the north by Oviedo, on the east by Ribera de Arriba and Morcín, on the south by Quirós and Proaza and on the west by Proaza and Grado.

A Fonsagrada is a town and municipality in the province of Lugo in the autonomous community of Galicia in northwest Spain which is 25 miles east-north-east of Lugo by road. Its population in 2004 was 5,007. A Fonsagrada is situated 3,166 feet (965 m) above sea-level on the watershed between the rivers Rodil and Suarna. It is an important market for a variety of agricultural produce, and it manufactures linen and frieze.

La Felguera is a parish of Langreo, and the most important district in the municipality of Langreo in northern Spain, with 21.000 inhabitants. It is located 18 minutes by car to Oviedo, the capital of Asturias. La Felguera is close to the Nalón River. 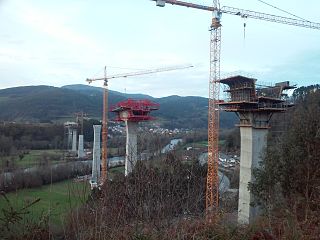 The Autovía A-63 is a highway in Asturias, Spain. Once completed, it will connect the provincial capital, Oviedo, with La Espina; currently it only connects Oviedo and Cornellana, with half of the carriageway built from Salas to La Espina. It follows the N-634. The possibility of adding a section to Canero, which would connect the road to the A-8, is currently being studied.

Club Deportivo Covadonga is a Spanish football team based in Oviedo, in the autonomous community of Asturias. Founded in 1979 it plays in Tercera División – Group 2, holding home games at Estadio Juan Antonio Álvarez Rabanal, with a 2,000-seat capacity. 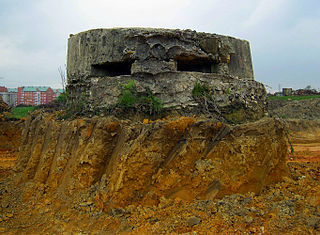 The Siege of Oviedo was a siege in the Spanish Civil War that lasted from 19 July until 16 October 1936. The town garrison, under the command of Colonel Antonio Aranda Mata, declared for the Nationalist uprising and held out until relieved by a Nationalist force. 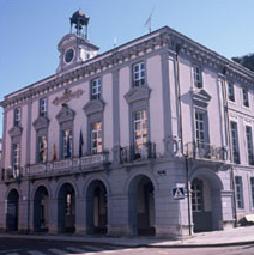 Pola de Allande is a town and a parish in Allande, a municipality within the province and autonomous community of Asturias, in northern Spain. It is surrounded by the Cantabrian mountains. It is the capital of the parish. The town was founded between 1262 and 1268. Oviedo, the capital of Asturias, is 104 km (65 mi) away. The Nison River runs through the middle of the town, known for its trout while now fishing is banned there. 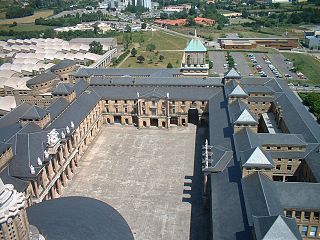 Cabueñes is a parish of the municipality of Gijón, in Asturias, Spain.

Bendones is a hamlet (aldea) and parish of the municipality of Oviedo, Asturias, Spain. 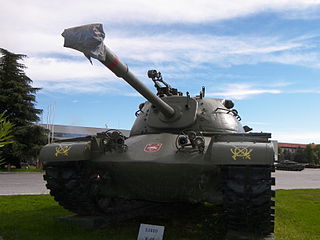 Tanks in the Spanish Army have over 90 years of history, from the French Renault FTs first delivered in 1919 to the Leopard 2 and B1 Centauro models of the early 21st century. The FT took part in combat during the Rif War and participated in the first amphibious landing with tanks in history, at Alhucemas. In 1925, the Spanish Army began to undertake a program to develop and produce a Spanish tank, heavily based on the Renault FT, called the Trubia A4. Although the prototype performed well during testing, the tank was never put into mass production. Spain also experimented with the Italian Fiat 3000, acquiring one tank in 1925, and with another indigenous tank program called the Landesa. However, none of these evolved into a major armor program, and as a result the FT remained the most important tank, in numbers, in the Spanish Army until the beginning of the Spanish Civil War.

Sograndio is one of eight parishes in Proaza, a municipality within the province and autonomous community of Asturias, in northern Spain.

Iglesia de San Juan el Real is a church in Oviedo, Asturias, Spain. It was established in 1912. Francisco Franco was married in the church in 1923.

Salvador Díaz Ordóñez y Escandón (1845–1911) was an artillery officer in the Spanish Army and the designer of several pieces of artillery, the Ordóñez guns. As a colonel, Ordóñez served in Cuba during the Spanish–American War, where he was wounded at Santiago de Cuba. He went on to reach the rank of General. He died on 14 October 1911 at Izhaven, near Melilla, from shots from a Rifian while inspecting the Spanish position there during the Kert campaign.

Perlavia is a place in the parish of Trubia, in the municipality of Oviedo, Asturias, Spain. Perlavia is located about 15 km from Oviedo, the capital city of the Principality of Asturias.

L'Entregu is a town and urban center in San Martín del Rey Aurelio, Asturias, Spain. In September 2007, by a decree of the Principality of Asturias, L'Entregu joined the adjacent Sotrondio and Blimea to form a single population center of San Martin del Rey name Aurelio as a homonymous municipality. In 2008, legislation was passed that established the official name of the town as bilingual, being thereafter known as L'Entregu. According to the Gazetteer of 2009, the population was 7,346 in L'Entregu and the combined population within the parish of Linares was 9,177.

Sotrondio is a town in San Martín del Rey Aurelio, Asturias, Spain. In September 2007, by a decree of the Principality of Asturias, it joined the adjacent El Entrego and Blimea to form a single population center, San Martin del Rey, as a homonymous municipality. It is 30 kilometres (19 mi) from Oviedo. The population was 3,849 in 2009, fewer residents than in previous years, declining due to the crisis of industrial restructuring in the Asturian coalfield. It is crossed by the Nalón River separating the Serallo neighborhood from the rest of the town. Aurelius of Asturias is believed to be buried at Iglesia de San Martín de Tours, which is near Sotrondio. It is the local parish church and was rebuilt by Duro Felguera after the Spanish Civil War. Teatro Virginia is located in the Plaza de Ramón y Cajal.

Oviedo railway station is the main station in the Spanish city of Oviedo, capital of the province of Asturias. It opened in 1874 and was reconstructed after the Spanish Civil War.

Olloniego is a parish of the municipality of Oviedo, Asturias, Spain.