Truck Driver is 1994 Romance/Drama Nepalese movie, written by Brazesh Khanal is directed by Rajkumar Sharma. This movie features Shiv Shrestha, Karishma Manandhar, Shree Krishna Shrestha, Madan Krishna Shrestha and Hari Bansha Acharya in the lead role. This film became one of the highest-grossing films of all time in Nepal. This movie also features the Maha jodi who were popular comedians at that time. The songs of this film became popular in Nepal. [1] [2]

A truck driver falls in love with the daughter of a restaurant worker in highway. As the small hotel runs well because of her youth and beauty, the cruel father does not want his daughter to marry and go away. One of his crooked friends convinces him to get rid of the truck driver. The friend compromises the brake linings of the Truck which falls down several hundred feet on the narrow windy and hilly highway resulting to the driver's death. The girl tries to commit suicide. However, she is saved by a young owner of a fuel station across from the hotel. He has been secretly in love with her over the years. He offers to marry her, give his name to the child to be born. They move to a big city, Kathmandu and raise the girl child. The second chapter of their life after the daughter is born is a complete turnaround with unexpected twists in the plot. Truck Driver is one of the biggest hits of Nepali movie history.

MaHa is the acronym of the comedy duo of Madan Krishna Shrestha and Hari Bansha Acharya of Nepal in Devanagari script. The acronym was coined by another contemporary comedian, Rajaram Paudel.

Madan Krishna Shrestha is a Nepalese actor, comedian and singer. He is one of the most successful and respected comedians in the Nepalese entertainment industry. He is well known for his method acting. He is one of the comedy duo, "MaHa Jodi", the other one being Hari Bansha Acharya. He also performs on stage most of the time with his partner, Hari Bansha Acharya. He has been suffering from Parkinson's disease.

Hari Bansha Acharya is a Nepalese actor, comedian, singer and writer. He is known for his method acting. He is one half of the comedy duo MaHa Jodi along with fellow comedian Madan Krishna Shrestha. He is known for his performance as Arjun in the 1997 patriotic drama film Balidaan. He also wrote and performed in the film Shatru Gatey.

Rājamati is a 1995 film be made in Nepal Bhasa. The first Nepal Bhasa movie is Silu, released in 1987.

Silu (1987) is the first film to be made in the Newa language. The movie depicts the pain of separation of a couple from Kathmandu after the wife gets kidnapped while on a pilgrimage in the Himalaya, and the sufferings her husband goes through to get her back from her captors. 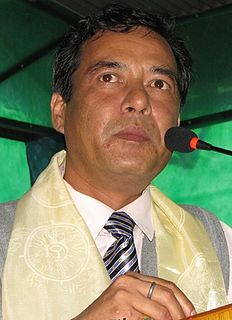 Shiva Regmi was a Nepali film director, producer and writer. His most recent film is So Simple. In 2010, Regmi was awarded the Nepali Film Development Board's National Film Award for Best Director for his work on the film Duniya.

China Harayeko Manchhe is an autobiography written by Hari Bansha Acharya. The story features a god-fearing man who happens to lose his "China" or "Cheena" (horoscope)..

Arpan Thapa . is a Nepali actor, director, and scriptwriter.

Chhakka Panja (Nepali: छक्का पञ्जा) is a 2016 Nepalese dark comedy drama film directed and produced by Deepa Shree Niraula. The film is Niraula's directorial debut and features Priyanka Karki, Deepak Raj Giri, Jeetu Nepal, Kedar Ghimire, Buddhi Tamang, Shivahari Poudel, Barsha Raut and Namrata Sapkota. The film received highly positive reviews for its screenplay and story, performances, humor and its social setting. However, due to piracy problems, the movie was released on YouTube. Due to the piracy, the international screening of the movie was highly affected. The film was " All Time Blockbuster " and is the 2nd highest grossing Nepali film of all time overtaken by its 3rd part. The film had two sequels :- Chhakka Panja 2 and Chhakka Panja 3, both of which were commercial blockbusters. Thus, it is the highest grossing Nepali movie franchise.

"Melancholy" is an environmentally-themed song sung by 365 Nepali artists. This song was intended to promote an environmental message by breaking the Guinness World Records for "Most Vocal Solos in a Song Recording", which it successfully did. It was written, music composed and directed by environmentalist Nipesh Dhaka. The song was recorded as a single on 19 May 2016. The recording sessions were inaugurated by Prime Minister Khadga Prasad Oli at 8 am and continued until 6 pm. The song was released on 2 September 2017 by President Bidya Devi Bhandari at Army Officer's Club, Kathmandu.

Shatru Gate is a 2018 Nepalese drama comedy film, directed by Pradip Bhattarai and written by Deepak Raj Giri, Pradeep Bhattari and Hari Bansha Acharya. The film is produced by Deepak Raj Giri, Deepa Shree Niraula, Narendra Kansakar and Shivahari Poudel under the banner of MaHa Sanchar. The film stars ensemble cast of Madan Krishna Shrestha, Hari Bansha Acharya, Deepak Raj Giri, Deepa Shree Niraula, Priyanka Karki, Paul Shah, Aanchal Sharma. The film was released on 23 March 2018 with mixed response from critics but positive response from audience. The film became an "All Time Blockbuster" at the box office with gross of over रु 12cr making it the fourth-highest-grossing Nepali film of all time.

Basudev is a 1984 Nepali language film, adapted from Dhruba Chandra Gautam's Kattel Sarko Chotpatak by Neer Shah in his directorial debut. The film starred Harihar Sharma as the eponymous character, with Shakuntala Sharma, Subhadra Adhikari, Krishna Malla, Sharmila Malla and director Shah himself in supporting roles, while Madan Krishna Shrestha and Hari Bansha Acharya were credited as guest actors. While the film was a critical and commercial success, it was criticised by some for its departure from the source material; Dhruba Chandra Gautam expressed disappointment at the film for being markedly different from the script he had written for the film. Neer Shah has conceded that various artistic compromises were made for commercial reasons which he came to regret later on. He is said to be actively planning a remake.

Balidaan (Sacrifice) is a 1997 Nepali historical drama film, directed by Tulsi Ghimire, and written by Modanath Prasrit. It was produced by Shyam Sapkota under the banner of Cinema Nepal. The film is set in Panchayat-era Nepal, and depicts a fictionalised version of the contemporary democracy movement. It features Hari Bansha Acharya in the lead role, alongside Anjali Lama, Madan Krishna Shrestha, Shanti Maskey, Keshav Bhattarai, Laxmi Giri and Neer Shah. The film was a critical and commercial success.