True Confessions is a confession magazine targeted at young women readers. It was originally published by Fawcett Publications, beginning in 1922.

Building on the success of Captain Billy's Whiz Bang magazine, Fawcett Publications published the first issue of True Confessions in August 1922. [1] With a cover price of 25 cents, the front cover of the October, 1922, issue heralded, "Our Thousand Dollar Prize Winner—'All Hell Broke Loose'." During the 1920s, Jack Smalley was the editor, and early issues in the run sometimes featured cover illustrations by Norman Saunders.

Directed at a female readership between the ages of 20 and 35, the magazine climbed to a circulation of two million during the 1930s, carrying such articles as "The Romantic Story of Jack Dempsey's Cinderella Bride." With True Confessions Fawcett was in competition with rival publishers Macfadden (True Story, True Romance, Experiences) and Hillman Periodicals (Real Story, Real Confessions, Real Romances, Crime Confessions). In 1945, Fawcett learned that 72% of the women who read True Confessions were married, just one piece of information gleaned after Fawcett spent $50,000 for a year-long survey involving 600 questions asked of True Confessions readers in Dayton, Ohio (chosen after the Census Bureau named it a typical wartime United States city). [2]

By 1949, these old-style confession magazines faced a setback in the midst of a new comic book trend, over 100 love and romance titles from two dozen companies, with press runs averaging 500,000. Macfadden reported a loss in the second quarter of 1949, while Fawcett profited with its new romance comics, reaching a million readers with Sweethearts and 700,000 with Life Story.

During the 1950s, when True Confessions was priced at 15 cents, the editor was Florence J. Schetty. The contents of the March, 1959, issue, edited by Schetty and priced at 25 cents, provide insight into the magazine's approach during that period. It included "God Is My Guide" by Clint Walker, "Hairdos You Can Do Yourself" by Grace A. Hufner, " "When a Girl Goes to Prison" by Jules Archer, "I Couldn’t Forgive My Brother-in-Law" by Anonymous and "Let’s Enjoy Breakfast" by Erva Jean Vosburgh. Another editor in the field was Clark Dimond, who edited True Experience for Macfadden-Bartell during the 1960s.

Some articles for True Confessions were condensed for republication in Reader's Digest , and Fawcett launched its Gold Medal Books paperback line in 1949 with anthologies of material from True (The Best of True Magazine) and True Confessions (What Today's Woman Should Know About Marriage and Sex).

Macfadden-Bartell purchased the magazine in 1963. Macfadden spun off its romance and teen magazines as a separate company in 1992, which then merged with Sterling publication to form Sterling/Macfadden. [3] Dorchester Media bought Sterling/Macfadden in 2004. In 2006, Dorchester teamed with Leisure Entertainment to launch a series of paperback anthologies titled True Confessions, True Romance and True Story. [4] [5] In 2012, Dorchester Media sold True Confessions and True Story magazines to True Renditions LLC. [6] 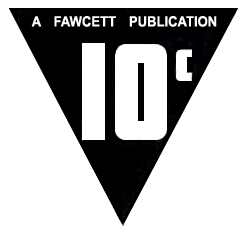 Gold Medal Books, launched by Fawcett Publications in 1950, was an American book publisher known for introducing paperback originals, a publishing innovation at the time. Fawcett was also an independent newsstand distributor, and in 1949 the company negotiated a contract with New American Library to distribute their Mentor and Signet titles. This contract prohibited Fawcett from publishing their own paperback reprints.

Bernarr Macfadden was an American proponent of physical culture, a combination of bodybuilding with nutritional and health theories. He founded the long-running magazine publishing company Macfadden Publications. He was the predecessor of Charles Atlas and Jack LaLanne; together they shaped the American cultural trend of "obsession with diet, health and fitness". However, Macfadden himself thought it best "to live a wholesome, rational life, and to forget the body as much as possible."

Pageant was a 20th-century monthly magazine published in the United States from November 1944 until February 1977. Printed in a digest size format, it became Coronet magazine's leading competition, although it aimed for comparison to Reader's Digest. 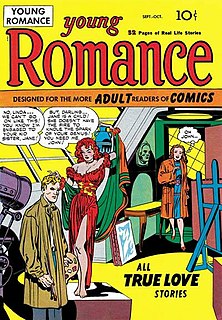 Romance comics is a comics genre depicting strong and close romantic love and its attendant complications such as jealousy, marriage, divorce, betrayal, and heartache. The term is generally associated with an American comic books genre published through the first three decades of the Cold War (1947–1977). Romance comics of the period typically featured dramatic scripts about the love lives of older high school teens and young adults, with accompanying artwork depicting an urban or rural America contemporaneous with publication.

Hillman Periodicals, Inc., was an American magazine and comic book publishing company founded in 1938 by Alex L. Hillman, a former New York City book publisher. It is best known for its true confession and true crime magazines; for the long-running general-interest magazine Pageant; and for comic books including Air Fighters Comics and its successor Airboy Comics, which launched the popular characters Airboy and The Heap. 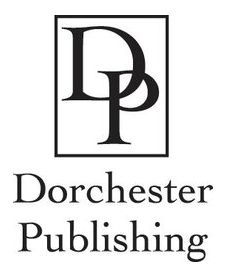 Macfadden Communications Group is a publisher of business magazines. It has a historical link with a company started in 1898 by Bernarr Macfadden that was one of the largest magazine publishers of the twentieth century. 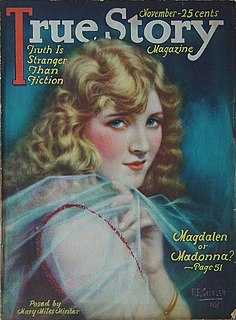 True Story is an American magazine published by True Renditions, LLC. It was the first of the confessions magazines genre, having launched in 1919. It carried the subtitle Truth Is Stranger Than Fiction.

Ghost Stories was an American pulp magazine that published 64 issues between 1926 and 1932. It was one of the earliest competitors to Weird Tales, the first magazine to specialize in the fantasy and occult fiction genre. It was a companion magazine to True Story and True Detective Stories, and focused almost entirely on stories about ghosts, many of which were written by staff writers but presented under pseudonyms as true confessions. These were often accompanied by faked photographs to make the stories appear more believable. Ghost Stories also had original and reprinted contributions, including works by Robert E. Howard, Carl Jacobi, and Frank Belknap Long. Among the reprints were Agatha Christie's "The Last Seance", several stories by H.G. Wells, and Charles Dickens's "The Signal-Man". Initially successful, the magazine began to lose readers and in 1930 was sold to Harold Hersey. Hersey was unable to reverse the magazine's decline, and publication of Ghost Stories ceased in early 1932.

I Confess was an American biweekly pulp magazine aimed at young women readers that was published between 1922 and 1932 by Dell Publishing. The magazine contained stories that were marketed as being true first-person accounts of mostly middle-class women’s lives and scandals told in a confessional style, which was different from many other pulp magazines which were mainly marketed as cheap fictional magazines. It was the first magazine and title ever published by Dell, and its popularity helped launch over 700 magazine titles, making Dell Publishing the successful publishing house that it remains today.

Manor Books was an American publisher of paperback books. It was founded by Walter Weidenbaum in 1972 and based in New York City.

The Bartell Group, later known as Bartell Broadcasters, Bartell Family Radio, Macfadden-Bartell, and the Bartell Media Corporation, was a family-owned company that owned a number of radio stations in the United States during the 1940s through the 1960s.

Emile Gauvreau (1891-1956) was an American journalist, newspaper and magazine editor and author of novels and nonfiction books. He is best known as editor of two of New York's entertainment and sensation oriented "jazz age" tabloid newspapers.